WASHINGTON, D.C. -- Hungarian protesters took to the streets Sunday after the European Parliament's vote to initiate sanctions against Hungary for what it called a "clear risk of a serious breach" of European values. Although Hungarian Prime Minister Viktor Orban easily won a third term in April, the protests were pro-European Union and anti-Orban. Such a tilt is perhaps not that surprising, given that the EU's leadership has consistently earned higher approval ratings in Hungary than Orban has.

While Orban's approval ratings have been gaining ground in recent years, Hungarians historically have given the EU's leadership higher marks. This aligns with the overall value that most Hungarians have placed on membership in the bloc: As recently as 2016, 62% of Hungarians said membership in the EU benefits their country.

Orban's government has drawn the European Parliament's ire for its recent attacks on independent media, academics, the rule of law and the rights of migrants, refugees and minorities. The parliament's unprecedented vote Wednesday was the first step in a process that could strip Hungary of its EU voting rights -- if the EU's member states unanimously vote to approve it. Poland -- which itself faces potential sanctions for similar reasons -- is expected to block it.

Hungary's situation is not likely to take center stage when EU leaders -- including Orban -- meet informally this week in Austria, but one subject related to Hungary's recent censure will: migration. No other region of the world is more divided on Gallup's Migrant Acceptance Index than the EU, where scores range from a high of 7.92 in Sweden to a low of 1.69 in Hungary. Poland's score is 3.31.

While Hungary's score is the lowest in the EU -- and among the lowest in the world after Macedonia and Montenegro -- acceptance of migrants within the country follows the political tide. Migrant Acceptance Index scores are lower among Orban's supporters (1.38) than among those who disapprove of his leadership (1.91).

Takeaway: Orban's staunch defiance against what he sees as "an abuse of power" by the EU for Hungary's decision that it is not going to be "a country of migrants" will likely play well with his base of supporters -- who are slightly less likely to approve of the EU's leadership and less likely to accept migrants.

How the situation plays in the rest of Hungary and in Europe -- where tensions run high between nationalist and federalist camps -- will unfold ahead of the next European Parliament elections in 2019.

These results are based on telephone and face-to-face interviews with approximately 1,000 adults, aged 15 and older, conducted throughout 2016 in 138 countries and in the U.S. in 2017. For results based on the total sample of national adults, the margin of sampling error ranges from ±2.1 percentage points to ±5.6 percentage points at the 95% confidence level. All reported margins of sampling error include computed design effects for weighting.

Judicial independence is under potential threat in Poland and several other EU member states. 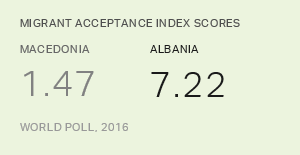 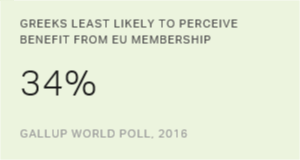