Forty-three percent of recent graduates who had a good job waiting for them upon graduation now earn at least $60,000 in personal income, compared with fewer than two in 10 graduates who took two to less than 12 months (18%) or one year or more (14%) to find a good job.

Additionally, more than a third (38%) of recent college graduates who took a year or more to land a good job now earn less than $24,000 in personal income. By comparison, Americans earning the federal minimum hourly wage can earn $15,080 a year by working 40 hours each week in jobs that typically do not require a bachelor's degree. About a quarter of recent graduates (23%) who took two to less than 12 months to find a good job now earn less than $24,000. However, only about one in 10 recent graduates who had a good job at graduation now earn that same low yearly wage (12%).

The findings come from the Strada-Gallup Alumni Survey (formerly known as the Gallup-Purdue Index), based on interviews with more than 4,429 U.S. adults aged 18 and older who earned a bachelor's degree between 2010 and 2016. For the purposes of this analysis, graduates who were not immediately seeking a job after graduation -- such as those who pursued additional education -- are excluded from the analysis. The research is drawn from Gallup's nationally representative survey of college graduates that has interviewed 80,000 different college graduates over four administrations. College graduates' first job out of college is particularly critical because it can set them on a career trajectory that is difficult to change. Recent research by Strada Education Network and Burning Glass shows that college graduates who are underemployed in their first job often remain underemployed even a decade after graduation. In short, graduates who start "high" on the career ladder remain atop the career ladder, while those who start "low" struggle to climb their way to better jobs and higher salaries.

These findings underscore how important it is for colleges to help their students graduate both prepared to compete in the workforce and able to identify quality jobs immediately upon graduation. For graduates who take just a few months to find that first good job after college, their earnings are significantly and negatively affected, compared with their peers who have jobs waiting for them upon graduation. While graduates who have a job immediately upon graduation likely represent the highly motivated "go-getters," institutions can be purposeful in helping their other students find good jobs as well.

Previous Gallup and Strada research about college students and graduates has demonstrated actionable ways that colleges and universities can help their students prepare for success in the workforce, including fostering high-impact learning experiences and career-specific discussions between students and faculty. For example, graduates across all fields of study who had a job or internship where they could apply what they were learning in the classroom were twice as likely to have had a good job at graduation. Additionally, college students who said that a faculty member initiated a conversation with them about their career options are far more likely to express confidence about their job prospects.

Students, parents and the public, alike, believe pursuing higher education is the key to getting a good job. There is certainly long-standing evidence that those who get a college degree earn considerably more over their lifetime, but this new evidence suggests that there is also a difference in earnings among college graduates based on how quickly they land a good job after graduating. Colleges and universities that can help their students find that good job quickly after graduation can help set their graduates on a successful career trajectory.

Results for the Strada-Gallup Alumni Survey (formerly the Gallup-Purdue Index Survey) are based on 4,429 U.S. adults aged 18 and older who earned a bachelor’s degree between 2010 and 2016. The surveys were conducted via web in three administrations: Feb. 4-March 7, 2014; Dec. 16, 2014-June 29, 2015; and Aug. 22-Oct. 11, 2016, with random samples of 29,560 respondents, 30,151 respondents, and 11,483 respondents, respectively, who had a bachelor’s degree or higher and were aged 18 and older, with internet access, living in all 50 U.S. states and the District of Columbia. For results based on those with a bachelor’s degree from national comparison institutions, the margin of sampling error is ±2.1 percentage points at the 95% confidence level.

Gallup-Purdue Index interviews are conducted via the web, in English only. Samples are weighted to correct for unequal selection probability and nonresponse. The data are weighted to match national demographics of gender, age, race, Hispanic ethnicity, education and region. Demographic weighting targets are based on the most recent Current Population Survey figures for the aged 18 and older U.S. bachelor’s degree or higher population. 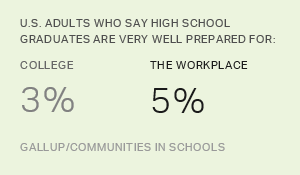 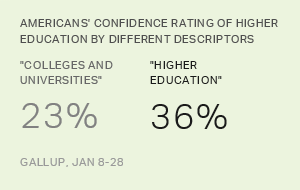