WASHINGTON, D.C. -- Brazil's worst recession in decades may officially be over, but Brazilians headed to the polls this weekend are finding it tougher to afford the basics than they have in years. Nearly one in three (32%) say they did not have enough money to afford food they needed in the past year, while a quarter (25%) say they lacked enough money for shelter. Both figures are about twice as high as they were before the 2014 election and the subsequent recession. Brazil entered a severe recession in early 2015 that ended in the first quarter of 2017. While the recession has been over for more than a year, more than 14 million Brazilians are estimated to be out of work and, as Gallup's data attest, more are struggling to put food on their tables and roofs over their heads than at any time during the recent economic crisis.

The two leading candidates for the presidency in Brazil's election this weekend have advocated for markedly different economic policies to reverse the damage caused by the country's recession. Jair Bolsonaro, described as the "Trump of the Tropics," has indicated he is considering privatizing state-owned industries, allowing foreign investment in key sectors and lowering interest rates. His closest competitor, leftist candidate Fernando Haddad, has proposed rolling back policies perceived as pro-business and removing caps on government spending, opening the door for increased funding of social programs.

The lasting effects of the country's economic troubles -- and their likely importance on Election Day -- are evident in Brazilians' assessments of their local economies and job markets. Currently, 78% continue to say it's a bad time to find a job and 43% say economic conditions are getting worse. While Brazilians' economic outlook has improved since the depths of the recession, it remains significantly more negative than prior to the start of the economic crisis. At the same time that high numbers of Brazilians are having difficulties paying for food and shelter and few see much hope for the job market, their assessments of their lives today are the worst in recent record.

Gallup routinely asks populations around the globe to rate their current lives on a scale of zero to 10, with zero being the worst possible life and 10 the best possible. In 2014, Brazilians' average life rating of their current lives at the time stood at 6.98. As the recession continued to ravage the country's economy, these ratings began to drop. The most recent average rating of life today in Brazil is 6.19, a new low. Brazilians' economic suffering has been compounded by a corruption scandal that has tainted much of the country's political leadership. Since 2016, the government has responded to the economic crisis with austerity measures that have cut spending on social programs. These austerity measures are thought to have little overall effect on the economy and have likely contributed to Brazilians' crisis of confidence in their government.

With the lingering effects of the recession weighing on the lives of Brazilians and fewer than one in five saying they have confidence in the national government, it is not surprising that many may be looking for change in this presidential election. 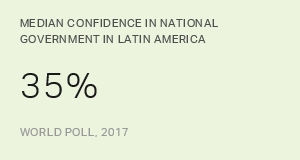 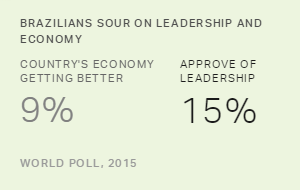