WASHINGTON, D.C. -- As thousands of Central American refugees wait to have their asylum applications processed by U.S. border authorities, Americans are slightly more likely to approve (51%) than disapprove (43%) of letting these refugees into the U.S.

That level of support exceeds the historical norm -- in most prior refugee situations, Americans were more likely to disapprove than approve of allowing them entry.

On average, including this year, 36% have supported letting various refugees into the country, while slightly more than half (55%) have been opposed. In addition to the current situation involving Central American refugees, the only other time Gallup measured greater support than opposition was for Kosovo refugees in 1999. Support for those Kosovo refugees may have been higher partly because the proposal called for a relatively small number of them to be admitted to the U.S.

These latest data, from a Dec. 3-12 Gallup poll, were collected just before a 7-year-old Guatemalan refugee died while in custody of U.S. Customs and Border Protection (CBP) after she and her father crossed the border illegally. The girl's death sparked outrage at the United States' treatment of the refugees and prompted an investigation of the situation. Even before the child's death, many were upset by CBP's use of tear gas on people, including children, who had traveled in a migrant caravan with intentions of crossing the border.

While the U.S. ranks among the most accepting countries for migrants, Gallup's World Poll has found that acceptance varies by Americans' approval of President Donald Trump, who attempted to restrict asylum applications through a proclamation that was struck down in federal court last month.

Support for Letting in Refugees Used to Be Less Politically Polarizing

Americans' approval of allowing Central American refugees into the country varies dramatically by party identification. Democrats (82%) are nearly six times as likely as Republicans (14%) to say they approve of letting these refugees enter the U.S. Independents' approval (52%) nearly matches the national average.

Republicans and Democrats also differed greatly when asked about Syrian refugees seeking to escape the civil war in their country in 2015. Back then, a majority of Democrats approved of allowing Syrians into the U.S., while a small minority of Republicans approved.

Incidents of refugees seeking to come to the U.S. were less divisive along party lines in the previous century. Gallup found that about two in three Americans of all political identifications supported taking in refugees from Kosovo in 1999. And in 1979, Republicans, independents and Democrats were similarly opposed to allowing in Southeast Asian refugees, also known as the Indochinese or "boat people."

Support for allowing in Central American refugees is currently lukewarm among Americans, who are slightly more in favor of granting the refugees entry than opposing it. But historically speaking, Americans are more supportive of these refugees coming to the U.S. than they generally have been for other groups, largely because an overwhelming majority of Democrats support allowing them into the U.S.

Americans' views on refugees are often nuanced. In 1938, Americans nearly unanimously disapproved of the Nazis' treatment of Jews -- but still, a solid majority opposed letting more refugees fleeing the situation into the U.S.

Though the pace of asylum application processing has been slow and support for the Central American refugees' entry is tepid among Americans, these refugees may be willing to wait, as they are fleeing countries where reports of gang presence and drug trafficking are high and personal safety is a concern. 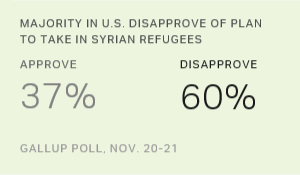 American Public Opinion and the Holocaust

American public opinion during World War II and the Holocaust is the subject of a new exhibit at the United States Holocaust Memorial Museum.