WASHINGTON, D.C. -- If they could, millions more Venezuelans would join the estimated 3 million of their fellow citizens who have already fled the political and economic chaos in Venezuela under embattled President Nicolas Maduro.

In Gallup surveys over the past three years, no fewer than one in three Venezuelans have said they wanted to leave their country permanently. That includes the 36% who said so late last year before the escalating political crisis and current international efforts to unseat Maduro. This percentage translates to about 8 million adults. On Maduro's watch, the country has spiraled deeper into economic and political trouble, and Venezuelans continue to face hyperinflation, shortages of food and medicine, and rising insecurity and violence. In this climate, citizens in record numbers have said they want to leave -- and millions have. The U.N. estimates that 3 million Venezuelans have left their country since 2015 (about 10% of the population), and that number could top 5 million by the end of this year.

Who Wants to Go?

Venezuela's youngest and most educated residents -- two groups that the country's future success depends on -- are the most likely to want to leave their country behind. A slim majority of Venezuelans aged 15 to 29 (51%) say they would like to leave their country. Although short of a majority, more than four in 10 Venezuelans with secondary (43%) or higher education (41%) say they would like to move to another country permanently.

Where Would They Go?

Most of the refugees and migrants who have left Venezuela have ended up dispersed throughout the immediate region. Neighboring Colombia has absorbed the lion's share, hosting more than 1 million Venezuelans and thousands more still arriving daily, followed by Peru, with more than half a million. Several hundred thousand have ended up in Ecuador, Argentina, Chile and Brazil.

The countries most affected by this massive exodus denounced the Venezuelan crisis and were among the first to recognize Juan Guaido as the country's interim president.

The 18% of potential migrants from Venezuela who say they would like to move to the U.S. permanently is slightly muted from previous years, but generally in line with the 17% who said so in 2017.

The current exodus from Venezuela is the largest in Latin America's history, and is about on par with that of war-torn Syria and Afghanistan. This huge and unprecedented exodus is depriving the country of legions of its most qualified human resources, seriously compromising its future ability to rebuild itself -- while imposing at the same time a tremendous burden on neighboring countries that threatens to destabilize them.

These circumstances have made the Venezuelan crisis a true regional crisis. This is one of the reasons the international community has become so actively involved in trying to solve it, pledging to help Venezuela restore democracy and rebuild its economy and social fabric.

Gerver Torres is a research adviser for Gallup and a senior associate at CSIS. 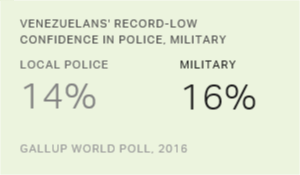 Amid the chaos in their country, Venezuelans' confidence in the local police, military and judiciary hit new lows last year, while just 12% said they feel safe walking alone at night.