While nearly all United Nations members -- except the United States and now Hungary -- agreed to the Global Compact for Safe, Orderly and Regular Migration in mid-July, we know from our Migrant Acceptance Index that these international standards on migration will be a particularly tough sell in many parts of the world where acceptance of migrants is low. Hungary, which has one of the lowest Migrant Acceptance Index scores in the world, pulled out of the compact shortly after the accord was reached on July 13.

Gallup's index gauges people's acceptance of migrants based on increasing degrees of personal proximity. The questions gauge whether residents in each country think migrants living in their country, becoming their neighbors and marrying into their families are good things or bad things. The higher the resulting index score, the more accepting the population is of migrants.

The overall numbers tell us a lot about who does and doesn't accept migrants in the 140 countries Gallup surveyed in 2016 and 2017. Scores are particularly low in a number of countries that have been on the front lines of the recent migrant crisis in Europe and particularly high in several countries with long histories as receiving nations. We also know generally that younger, educated and urban people are more accepting, and that in almost every country, acceptance scores are higher if people know at least one migrant.

A closer look at the differences between results for these index items provides evidence that unique factors -- such as cultural norms and traditions -- are also at play. Countries in which the gap between the percentages who say migrants living in a country and marrying into their families are good things is particularly wide -- at least 19 percentage points or more -- largely cluster in Gulf Cooperation Countries, Central Asia, South Asia and North Africa.

At the country level, the largest difference is in Turkmenistan, where 67 points separate the percentage who see migrants in their country as a good thing (83%) and the percentage who say the same about migrants marrying into their families (16%). This largely reflects the favorable attitudes toward foreigners who bring jobs into the country juxtaposed with the cultural taboo associated with marrying outside of one's ethnic group in Turkmenistan.

In the United Arab Emirates, where the gap is second-largest at 48 points, the government actually encourages Emirati men to marry Emirati women, providing them with grants through its Marriage Fund. According to the government, more than 61,000 people had received grants amounting to 4.3 billion AED as of 2014. UAE residents from other GCC countries and other Islamic countries often must go through the additional step of obtaining the approval of their respective countries to marry.

At the same time, in some of the most-accepting and least-accepting countries for migrants, there is little difference between the percentages who say migrants living in the country and marrying into families are good things. For example, in the most-accepting country, Iceland, and in the least accepting-country, Macedonia, just two percentage points separate people's attitudes on these two measures. Interestingly, this is also true in the U.S. -- which pulled out of the migration compact last year, and where migration continues to be an incendiary political issue.

The legally nonbinding migration agreement, which United Nations officials say is supposed to offer a framework for national governments to devise their own migration policies, is expected to be formally adopted in December. But there is a lot of time between now and then.

This situation illustrates how monumental it was for so many countries to reach an accord and the challenges facing the compact's formal adoption. The Migrant Acceptance Index underscores the complexity of the issue in countries where acceptance is extremely low -- but also even in places where acceptance appears to be high. Acknowledging and understanding these differences may help everyone yet find some common ground.

These results are based on telephone and face-to-face interviews with approximately 1,000 adults, aged 15 and older, conducted throughout 2016 in 138 countries and in 2017 in the U.S. and Canada. In some countries, such as India, Russia and China, sample sizes are much larger, between 2,000 and 4,000 adults. For results based on the total sample of national adults, the margin of sampling error ranges from ±2.1 percentage points to ±5.6 percentage points at the 95% confidence level. All reported margins of sampling error include computed design effects for weighting. 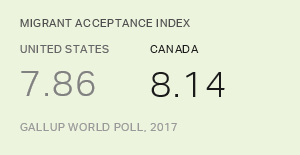 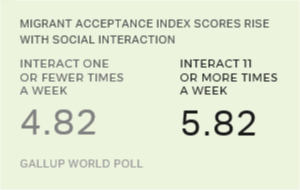