WASHINGTON, D.C. -- In a Gallup poll conducted shortly after the first round of Democratic debates, Bernie Sanders and Joe Biden continue to enjoy the highest favorability ratings of all major Democratic contenders among the party's base. Both are viewed favorably by roughly seven in 10 Democrats and Democratic-leaning independents. Eight other candidates tested in the poll fall below 60% favorability, but this is mainly because they are less well-known, not because they are disliked.

The Five Tiers of Democratic Favorability

The 10 candidates rated in the July 1-12 Gallup survey coincidentally align neatly into pairs, according to their images among rank-and-file Democrats.

The main exception to this pattern is New York City Mayor Bill de Blasio, who has one of the lowest favorable ratings but a mid-range "no opinion" score. That's because his unfavorable rating is 30%, significantly higher than the 10% to 19% range seen for the other candidates.

Biden's Rating Down Since February

Gallup has measured Democratic candidate favorable ratings three times this year -- in February, April and the latest survey, in July. Across these, the only notable change has been a decline in Biden's favorable score. This has occurred among Democrats as well as U.S. adults overall. On a longer-term basis, Biden's overall favorable rating is back below 50% for the first time since he served as Barack Obama's vice president, when he was routinely below that level. Harris, Others, No More Familiar to Democrats Since First Debate

Gallup's two most recent measures of candidate favorability span the first round of Democratic debates, held on June 26 and 27.

Despite significant media coverage of this landmark event in the 2020 campaign -- with the June debates featuring 20 of the 23 announced candidates at that time -- none of the candidates saw a boost in Democrats' and Democratic leaners' familiarity with them.

This lack of movement in familiarity includes Harris, whose sparring with Biden over his historical record on school busing dominated the news cycle for the first week after the debate. The percentage of Democrats with no opinion of her or who have never heard of her is currently 34%, similar to the 32% in April.

Thus, Harris' recent rise in nomination preference polls has likely come from Democrats already familiar with her, rather than from others learning about her from her debate performance.

Although Sanders and Biden both lead Trump in recent general election horse-race polls, Trump's favorable rating among Americans, 45%, is on par with theirs. All other Democrats' U.S. favorable ratings lag far behind, mainly a reflection of large segments of Americans being unable to rate them. (See tables linked above Survey Methods.)

Trump compares less favorably to Biden and Sanders when one takes their unfavorable scores into account. On that basis, Biden enjoys a net-positive image from Americans, and Sanders' rating is -2, while Trump's image is -7.

One reason Trump fares relatively well on the favorability meter, at least, is that he receives a higher favorable score from Republicans and Republican leaners (84%) than Biden (69%) and Sanders (72%) do from Democrats and leaners. Once the Democratic nominee is chosen, Democrats are almost certain to support that person at a level that is similar to Republicans' current support for Trump, thereby boosting the nominee's overall favorable rating.

Gallup's latest measurement of the Democratic presidential candidates' popularity, among potential Democratic primary voters as well as all U.S. adults, shows little change in the past three months -- particularly among top contenders Sanders, Warren and Harris.

Biden remains among the best-liked candidates for Democrats and Democratic leaners, but friction between him and some of the other Democratic candidates may explain why his rating among Democrats has dipped since February. Meanwhile, a mounting war of words between Biden and Trump may be what's eroding Republicans' views of him. Biden's continued front-runner status in most horse-race polls may also be making him more of a target for members of both parties who are supporting other candidates for president.

The good news for lower-ranked candidates is that their unfavorable ratings remain fairly low. The challenging news is that their favorable ratings are also fairly low, as barely half of Democrats know enough about them to rate them. This has persisted through the first round of Democratic debates, but is likely to change as the pace of those accelerates and the 2020 caucuses and primaries draw closer. 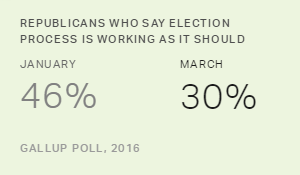 Thirty percent of Americans say the presidential election process is working as it should, down from 37% in January. The decline is driven mainly by Republicans' increasingly cynical views of the process.