This study is brought to you by the Gallup Center on Black Voices. Sign up to receive the latest insights.

WASHINGTON, D.C. -- A national conversation on racism and injustice that received renewed attention last summer has permeated virtually all areas of American society, including U.S. workplaces. As employers consider their role in the conversation and the actions they should take, the Gallup Center on Black Voices finds that about one in four Black (24%) and Hispanic employees (24%) in the U.S. report having been discriminated against at work in the past year.

These findings, derived from a large-scale Gallup web survey conducted in English Nov. 6-Dec. 1, 2020, reveal that workplace discrimination reported by Black and Hispanic workers exceeds reports of such experiences among White employees (15%) by a substantial margin. More than 8,000 respondents were surveyed, including more than 3,500 White workers, more than 2,000 Black workers and more than 2,000 Hispanic workers.

Age, however, is a significant factor in Black employees' experiences with workplace discrimination. Black workers younger than 40 (31%) are almost twice as likely as Black workers aged 40 and older (17%) to report having experienced discrimination at work in the past year. This conforms with the Center's previous findings that young Black adults experience microaggressions at greater rates.

Race-Based Discrimination the Most Common Type Experienced by Black Workers

In a follow-up question among those who perceived discrimination, 75% of Black workers indicated that the discrimination they experienced was based on their race or ethnicity -- considerably higher than figures for Hispanic (61%) and White employees (42%).

The 75% figure among Black employees is constant across gender, age and income subgroups, with similar proportions of each saying the discrimination they experienced in the past 12 months was due to their race.

Black Americans experience various mistreatments at much higher rates than other racial or ethnic groups do. And while racial discrimination in the workplace is illegal under federal law, about one in four Black employees report having been on the receiving end of discrimination at work in the past year alone.

Gallup has previously found that employee engagement "is linked to how an employee feels their employer would respond to discrimination concerns" and that engaged employees are much more confident that their employer would "do what is right" compared with those who are less engaged. Previous research from Gallup also finds that employees are less likely to feel discriminated against at work if they have great managers who build a culture of high engagement and respect.

Among young Black employees, who are early in their careers and looking to establish a professional footing, experiences of workplace discrimination are reported at an even higher rate. Early experiences in the workplace shape employees' careers -- and negative experiences can have an impact on their trajectories and future attitudes about work, as well as their opportunities to excel and feel accepted on a team.

Gallup has found that what everyone in the world wants is a good job -- but that pursuit is made harder for Black Americans, of whom one in four say they experience discrimination on the job.

Subscribe to receive email updates on Gallup's latest insights and historical findings on the experiences of Black Americans.

Results are based on a Gallup Panel web study completed by 8,360 U.S. employees, aged 18 and older, fielded Nov. 6-Dec. 1, 2020. The survey was conducted in English. Individuals without internet access were not covered by this study. 3,120 respondents were recruited from the Gallup Panel, supplemented by 5,240 respondents from a third-party sample provider (Dynata).

The Gallup Panel is a probability-based panel of U.S. adults whom Gallup selects using address-based sampling methods and random-digit-dial phone interviews that cover landlines and cellphones. Demographic targets were specified for the third-party sample provider to improve representativeness of the sample. Sample sources were integrated through propensity score matching and the combined sample for this study was weighted to be demographically representative of the U.S. adult population, using the most recent Current Population Survey figures.

For results based on this sample, one can say that the maximum margin of sampling error, which takes into account the design effect from weighting, is ±1.5 percentage points at the 95% confidence level. Margins of error for subgroups are higher. In addition to sampling error, question wording and practical difficulties in conducting surveys can introduce error and bias into the findings of public opinion polls. 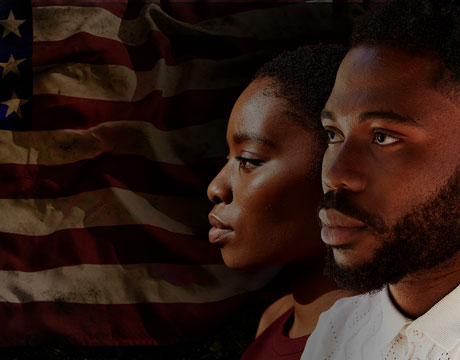 Research and Insights
Follow the Gallup Center on Black Voices
Subscribe for more findings from our ongoing, independent research on the experiences of more than 40 million Black Americans.