WASHINGTON, D.C. -- While Myanmar's military says massive voter fraud in the November elections forced it to stage a coup this week, most voters in Myanmar were highly confident in the honesty of their country's elections in 2020. More than eight in 10 adults in Myanmar (82%) surveyed between October and December -- overlapping the Nov. 8 election -- said they were confident in the honesty of elections in their country. This level of confidence in Myanmar's elections is fairly typical for the levels measured over the past several years. Faith in the honesty of elections peaked at 92% in 2016, after the 2015 election that brought now-detained Aung San Suu Kyi and her National League for Democracy (NLD) political party into power.

People's confidence in their national government remained steady at the time of the survey, with 85% of Myanmar residents expressing faith in their government, unchanged from 2019. The job approval rating of then-President Win Myint, who was arrested during the coup and detained, was similarly high at 81%.

However, while still at the majority level, confidence in the military notably slipped to a low of 65% in 2020. This dip in approval may not bode well for military leadership as it continues to tighten its grip on the country, including new lockdowns on the internet and news services. Line graph. Confidence among Myanmar residents in their national government held steady at 85% prior to the military coup. However, confidence in the military fell to 65% in 2020, down from 80% in 2019.

Like the rest of the globe, Myanmar's economy has been hit hard by the COVID-19 pandemic and associated lockdowns to control the spread of the disease. The government has attempted to cushion the blow by providing assistance to the population. However, a high of 80% of residents in 2020 said it was a bad time to find a job in their local area. In 2020, because of the COVID-19 pandemic, data collection in Myanmar switched from in-person interviewing to via telephone.

Before the military coup, levels of confidence in elections and the national government were steady in Myanmar. However, confidence in the country's military had dropped. Residents registered substantially more concern about their economic conditions.

Controlling the pandemic in Myanmar and addressing the country's economic woes will likely prove key to any effort by the military to retain power through the "state of emergency," which it declared as part of the coup. However, the population may be particularly vulnerable to international sanctions that the U.S. is currently considering.

Results are based on face-to-face interviews conducted Oct. 29-Dec. 4, 2020, with a random sample of 1,000 adults, aged 15 and older, in Myanmar. For results based on the total sample of national adults, the margin of sampling error is ±4.2 percentage points at the 95% confidence level. All reported margins of sampling error include computed design effects for weighting. 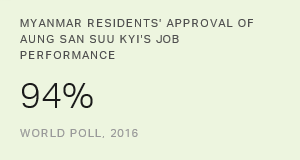 Myanmar's new civilian leader Aung San Suu Kyi, who is visiting the U.S. this week for the first time since her government took office, earns a 94% approval rating among the country's residents in 2016. 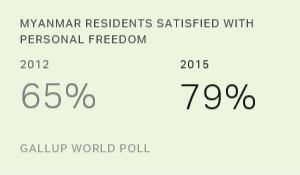