WASHINGTON, D.C. -- Gallup's most recent gender identity data find 0.6% of U.S. adults identify as transgender; that is, the gender with which they identify is different from the one they were assigned at birth. Changing one's gender identity is sharply contentious among Americans, who are slightly more likely to say it is morally wrong (51%) than morally acceptable (46%).

There are significant demographic disparities in Americans' views, including by gender, age and political ideology. Women are more likely than men to view switching genders as morally acceptable, as are younger adults more likely than older adults. The large majority of those who identify as politically liberal (78%) think being transgender is acceptable from a moral standpoint, and they are more than three times as likely as political conservatives (23%) to say as much.

Gallup has tracked Americans' views of the morality of a range of social issues since 2001. The latest update, conducted May 3-18, includes 20 issues, 16 of which have been tracked since the early 2000s. The gender question was asked for the first time this year.

A majority of Americans consider 11 of the 20 issues morally acceptable. The use of birth control ranks at the top of the list, with 90% of U.S. adults saying it is acceptable.

Fewer, though still more than half of U.S. adults, think the death penalty, buying and wearing clothing made of animal fur, doctor-assisted suicide and medical testing on animals are morally acceptable.

As is the case with views of changing one's gender, a slim majority think sex between teenagers is morally wrong, while the remaining six issues are viewed as morally wrong by larger majorities of Americans. Nearly nine in 10 U.S. adults believe extramarital affairs and cloning humans are morally wrong, and just over three-quarters view polygamy and suicide the same way. Roughly six in 10 think cloning animals and pornography are wrong from a moral perspective. 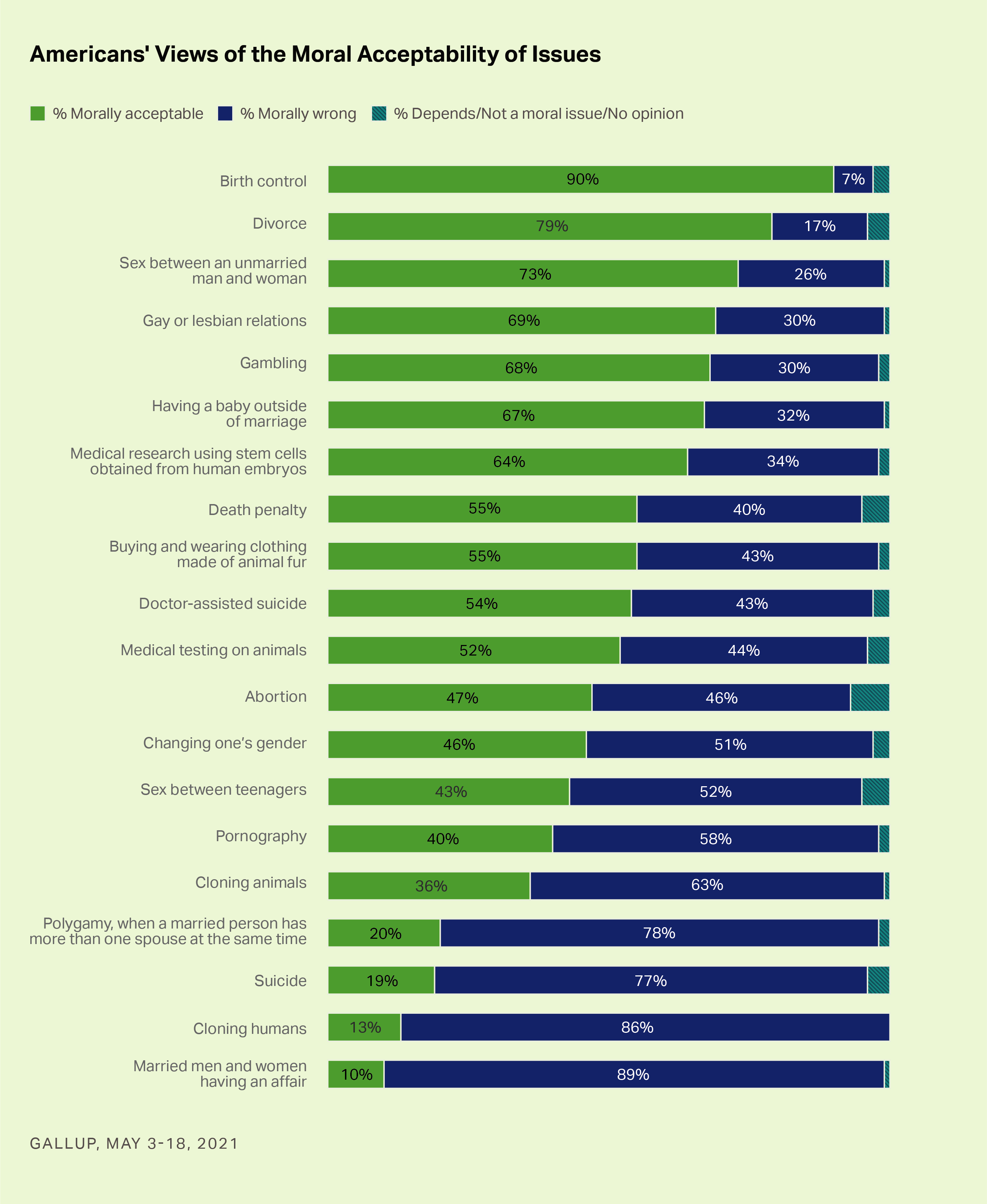 Stacked bar chart. Of 20 issues measured, 11 are considered morally acceptable by majorities of Americans -- birth control, getting a divorce, sex between an unmarried man and woman, gambling, smoking marijuana, gay or lesbian relations, having a baby outside of marriage and medical research using human embryonic stem cells, the death penalty, medical testing on animals, buying and wearing clothing made of animal fur and doctor-assisted suicide. Views on abortion are split nearly evenly and the remaining seven issues are viewed by majorities of Americans as morally wrong: extramarital affairs, cloning humans, suicide, polygamy, cloning animals, pornography and teenage sex.

Current perceptions about the morality of the issues tested are similar to readings in recent years. However, the latest data includes several notable findings from a historic perspective:

Generally speaking, Americans' attitudes have become more morally permissive on most of these issues over the past two decades.

Political Ideology Divides Views of Morality of Nearly All Issues

Americans' perspectives on morality are strongly related to (and perhaps influenced by) their own political ideology. The most polarizing issues are changing one's gender and abortion with 55- and 54- point gaps, respectively, in liberals' and conservatives' views of them as morally acceptable.

There are significant ideological differences on all issues but medical testing on animals. Even so, majorities of liberals and conservatives are on the same side of the issue in 10 of 20 cases. On almost all of the rest, liberals find the practice morally acceptable, while Republicans disagree.

Americans' views of the morality of 20 issues are little changed since last year, though from a longer-term perspective, Americans' views have shifted significantly toward more permissive attitudes. Birth control and divorce continue to be the most morally acceptable to society and extramarital affairs, and cloning humans the most morally wrong. The new addition to the list, changing one's gender, is nearly as divisive as abortion, which has typically been the most contentious issue. And the ideological divide on these two issues is the greatest seen in the poll. Transgender issues only recently emerged as a prominent topic in society, and it remains to be seen whether the public's views about changing one's gender will evolve in the way that their opinions of gays and lesbians did, or if they stay as polarized as abortion.