The data, largely collected prior to the Taliban's takeover of Afghanistan and before the subsequent terror attack on U.S. troops there, found significantly fewer Americans than in the past believing the U.S. is winning the war on terror. Likewise, confidence in the U.S. government to protect its citizens from terrorism was near a two-decade low. Concern about being a terror victim, too, was lower than in the past, although that may have changed in recent days.

These results are from Gallup's Aug. 2-17 poll, which included a series of questions relating to terrorism that were asked in the days and months following the 9/11 terror attacks and repeated in 2011 at the 10-year anniversary of the event.

U.S. adults are more likely now than at any prior point to say that Americans have permanently changed the way they live. The 64% saying this is up slightly from 58% at the 10th anniversary, and from percentages near 50% in the first few years after 9/11.

Asked about the effect on their own lives, 28% say they have permanently changed the way they live. This is unchanged from a decade ago, but slightly higher than Gallup measured between 2002 and 2006. 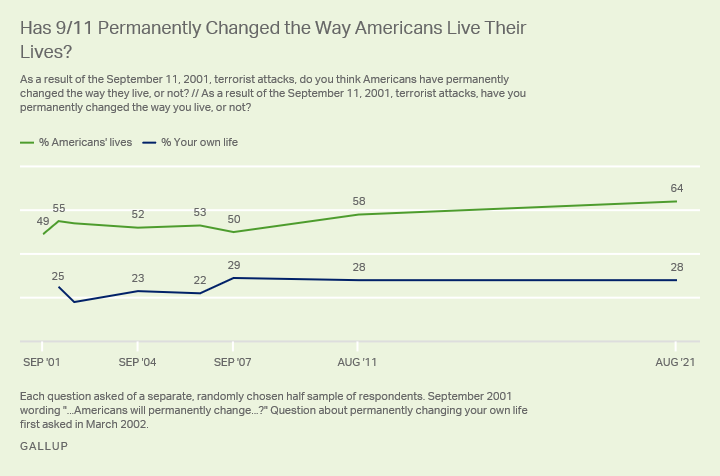 There are not meaningful differences in the percentage of U.S. adults who say they have permanently changed the way they live by gender, age, educational attainment, party affiliation and place of residence. However, more Nonwhite Americans (44%) than White Americans (21%) say their lives have been permanently altered.

Certain subgroups are more inclined than others to think that Americans have permanently changed the way they live. These include Democrats (72%), suburban residents (71%), college graduates (72%) and upper-income Americans (74%).

Reluctance to Engage in Public Activities Due to Terrorism Concerns Down

Today, fewer Americans than 20 years ago express reluctance to fly on airplanes (26%), go into skyscrapers (27%) and travel overseas (36%). However, more today (37%) than in 2001 say they are less willing to attend events where there are large crowds. The increased aversion to crowded events is not influenced by the current COVID-19 pandemic, though, because the increase was apparent in a 2017 survey conducted after two high-profile terrorist attacks on crowds in England. 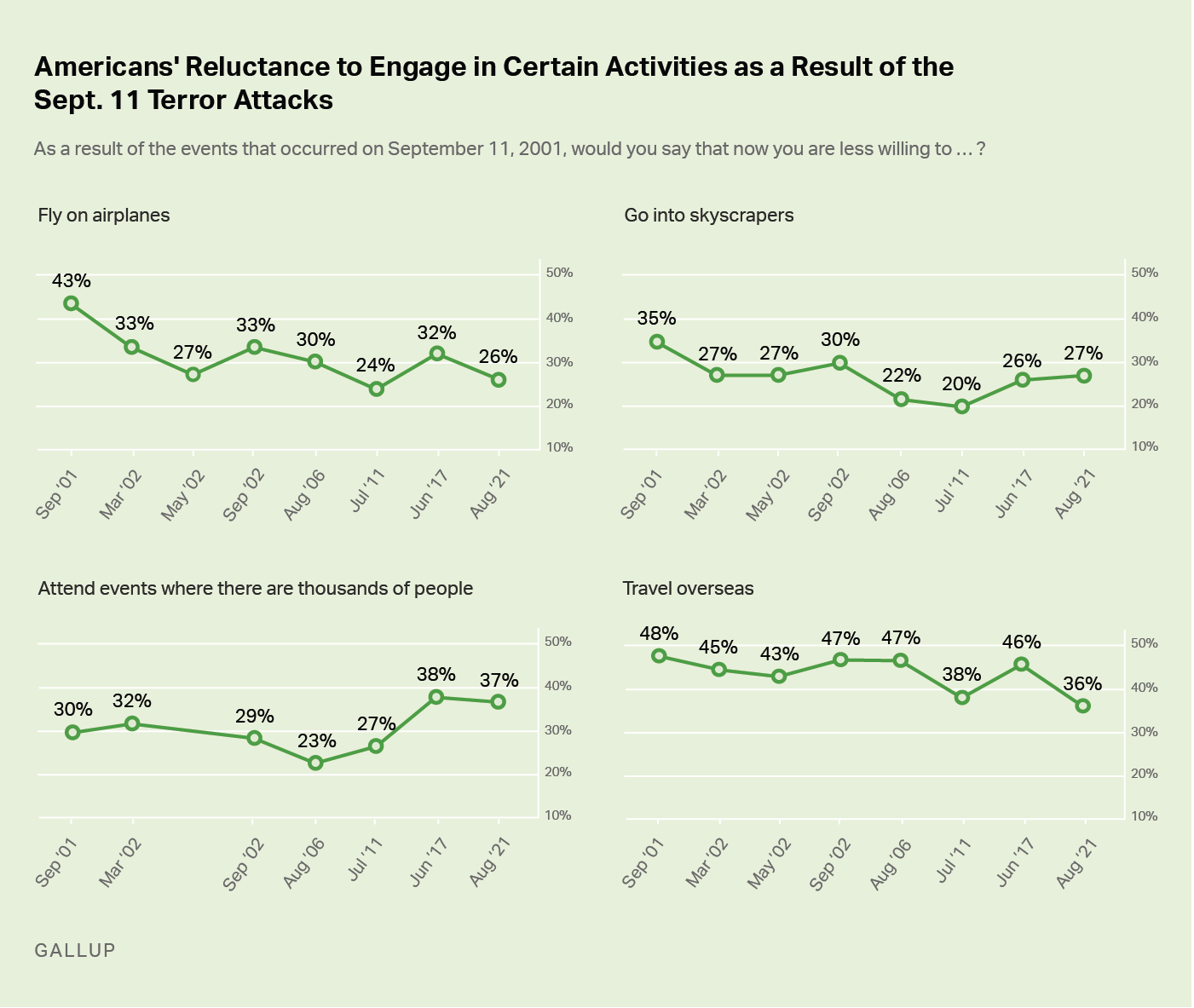 Older Americans (those aged 50 and older), lower-income Americans, and adults without a college education are among the subgroups who are most likely to say they are less willing to engage in these public activities due to the 9/11 terror attacks.

Between 2011 and mid-August, Americans became significantly less likely to say the U.S. is winning the war on terrorism -- 28% said this in the August survey compared with 42% in 2011. The most recent figure represented a new low in the trend, although it is statistically similar to the 29% measured in 2007 after the U.S. surge in troops in Iraq.

As fewer Americans believed the U.S. is winning the war, more came to believe the terrorists are. The August survey found 22% saying the terrorists are winning, up from 9% in 2011 and just one point below the high measured in 2005. The largest proportion of Americans -- 49% -- believed neither side is winning, as has been the case in the past three measurements.

In the early stages of the Afghanistan war in late 2001 and early 2002, and again after initial U.S. success in Iraq in 2003, majorities of Americans believed the U.S. was winning the war against terrorism. 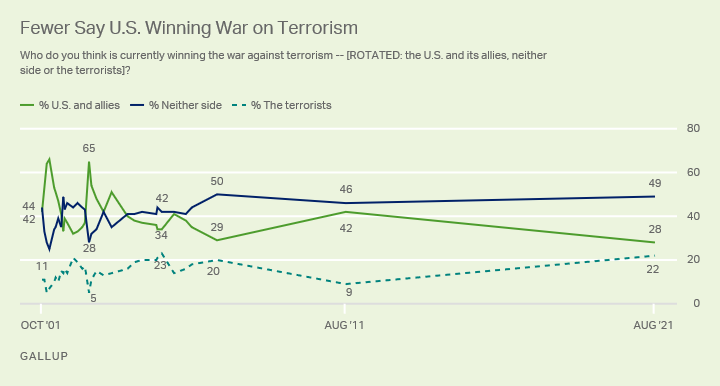 Line graph. Trend in perceptions of whether the U.S. and its allies, the terrorists or neither side is winning the war against terrorism. Currently, 49% say neither side is winning, similar to the most recent measures. Twenty-eight percent say the U.S. is winning, down from 42% in 2011 and the lowest measured to date. Twenty-two percent say the terrorists are winning, up from 9% in 2011 and essentially tied with the high of 23% in 2005.

The declining belief that the U.S. is winning the war is apparent among all party groups. The percentages of Republicans, Democrats and independents who say the U.S. is winning are all down by double-digits, while there are similar increases among each group that the terrorists are winning.

Prior to the Aug. 26 attack on U.S. troops at the Kabul airport, the majority of Americans, 59%, were very (18%) or somewhat (41%) confident the U.S. government can protect its citizens from terrorism. This level of confidence was significantly lower than in 2011 (75%) and in the immediate days after the 9/11 terror attacks (88%).

In fact, Gallup had only measured lower confidence in one other poll, 55% in December 2015, after a deadly mass shooting in San Bernardino, CA, that many regarded as a terrorist attack. 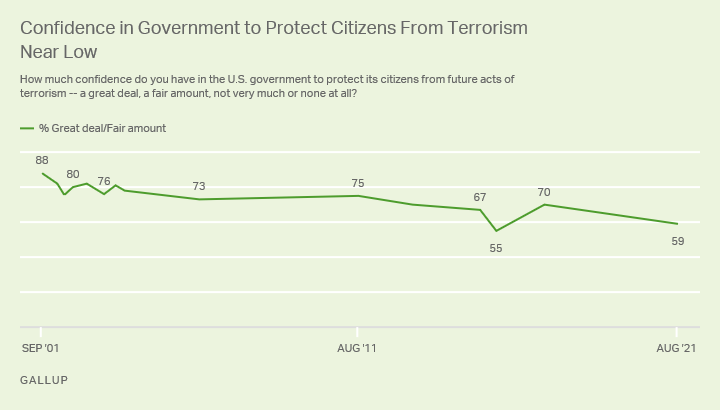 Line graph. Trend in Americans' confidence in the government to protect citizens from terrorism. Fifty-nine percent have a great deal or fair amount of confidence, which is the lowest in Gallup's trend since 2001, apart from a 55% reading in 2015. Right after the 9/11 terror attacks, 88% were confident. For most of the rest of the trend, at least seven in 10 have been confident.

In the latest survey, confidence was down from 2011 and 2017, mostly among Republicans but also independents. The poll found 41% of Republicans were confident in the government's ability to protect its citizens from terrorism, down from 77% in 2017 (when Donald Trump was president) and 73% in 2011 (when Barack Obama was). Fifty-three percent of independents were confident, compared with roughly two-thirds in 2011 and 2017, while 80% of Democrats were.

Prior to the Kabul airport terrorist attack, 36% of U.S. adults said they were very or somewhat worried about being the victim of terrorism. That is unchanged from a decade ago but well below the 51% measured the first few days after 9/11. 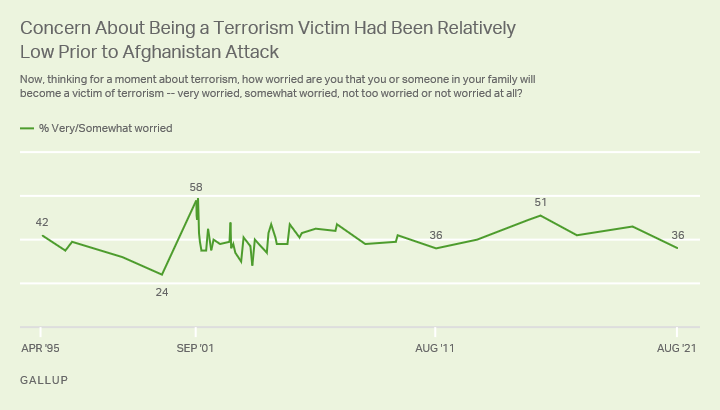 Line graph. Trend in Americans' concern about terrorism. In early August, 36% of U.S. adults were very or somewhat worried about being the victim of terrorism, among the lower points in Gallup's trend. Concern was the same 10 years ago. The high point was 58% on the night of the Sept. 11 terror attacks.

Gallup first gauged concern about being a victim of terrorism in 1995, after the Oklahoma City bombing. The high point was measured in a survey conducted the night of the 9/11 terrorist attacks. The low point of 24% was measured in April 2000. Since 9/11, the low point was 28% in January 2004.

The 9/11 terror attacks rank among the most tragic events in U.S. history. Although those events are now two decades in the past, the messy U.S. withdrawal from Afghanistan has brought terrorism back into the public consciousness. The U.S. had started military action in Afghanistan after 9/11 to attempt to protect Americans from terrorism, but the mission is ending with a deadly terrorist attack on U.S. troops helping Americans and their allies escape the country.

Even before last week's attack, Americans showed diminished confidence in the government to protect U.S. citizens from terrorism and were less inclined to believe the U.S. was winning the war against terrorism.

Two decades after 9/11, most Americans perceive that their fellow citizens have permanently changed the way they live. And while just over one in four say 9/11 has dramatically altered their own way of life, substantial minorities still express reluctance to engage in activities that recall the horror of 9/11, including flying airplanes and going into skyscrapers.