WASHINGTON, D.C. -- In the week after the deadly shootings in San Bernardino, California, Americans' confidence in the federal government's ability to protect citizens from acts of terrorism has dropped to a new low of 55%. Confidence in the U.S. government to protect citizens from terrorism is down 12 percentage points since June, and is now 33 points lower than the 88% who said they had a "great deal" or "fair amount" of confidence shortly after 9/11.

These data, collected Dec. 8-9, come just days after the San Bernardino shootings and as more details emerge about the shooters' identities and alleged connections to radical Islamic ideology.

The new low continues the gradual erosion in confidence over the past 14 years. But the peculiarities of the latest shootings may particularly affect Americans' views of what their government can do to prevent such events, because one of the shooters was a U.S.-born Muslim, while the other was a woman and a mother -- a statistical anomaly among terrorists' profiles. Most prior perpetrators of terrorist attacks in the U.S. were young males.

Despite the sharp drop in confidence in the government to protect citizens from terrorism, Americans are no more likely to worry that they or their family members will be terrorism victims than they were six months ago. About half (51%) say they are "very" or "somewhat" worried that they or a relative will be a victim, similar to the 49% in June.

The current percentage who are worried that they will be affected by terrorism is higher than all but a few figures from Gallup's trend -- and all of those came right after the 9/11 attacks, when between 51% and 59% said they worried for themselves and their family members. Although the latest figure is not significantly different from the 49% measured earlier this year, that figure in turn was higher than had been seen in recent years, most likely reflecting Americans' increasing concern about the rise of the Islamic State. The percentage of Americans who believe it is "very" or "somewhat likely" that acts of terrorism will take place in the U.S. in the next several weeks (67%) has increased sharply, by 22 points, since June. The current figure is the highest on this measure since early 2003, just after the U.S.-led invasion of Iraq began. The dramatic increase may reflect both the San Bernardino shootings and the attacks in Paris last month.

The peak for this measure was shortly after the 9/11 attacks, when 85% of Americans felt another terrorist attack was imminent. Since then, expectations for such attacks have reached the current level only at the start of the Iraq War in March 2003 and after the U.S. killed Osama bin Laden in May 2011. Americans' heightened sense of the possibility of future terrorist attacks and their weakened trust in the government's ability to combat terrorism may have, in part, prompted President Barack Obama's Oval Office address this week, when he spoke about the threat of terrorism and his administration's work against it. Still, several Republican presidential candidates have criticized the president's response to the attacks and the administration's handling of the threat of terrorism in general.

Americans' views of the likelihood of terrorist attacks have previously shot up after an attack, only to settle back down again. One key to understanding the public's views on this issue at this point will be monitoring whether that same pattern recurs, or whether this time the fear of a new attack stays high for an extended period of time.

Results for this Gallup poll are based on telephone interviews conducted Dec. 8-9, 2015, on the Gallup U.S. Daily survey, with a random sample of 1,013 adults, aged 18 and older, living in all 50 U.S. states and the District of Columbia. For results based on the total sample of national adults, the margin of sampling error is ±4 percentage points at the 95% confidence level. All reported margins of sampling error include computed design effects for weighting. 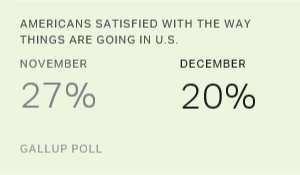 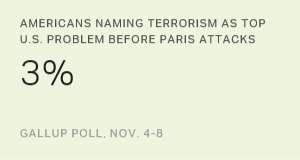