Editor's Note: This story has been updated to provide the correct methodology statement. An earlier version of the story incorrectly indicated the interviews were completed by telephone rather than web.

WASHINGTON, D.C. -- Americans' assessments of the coronavirus situation have flipped from highly positive to highly negative over the past two months. Sixty-eight percent of U.S. adults say the situation is getting worse, while 15% say it is getting better. In June, before the recent surge in coronavirus infections, 89% said the situation was getting better and 3% said it was getting worse. Last month, Americans were about equally positive and negative in their evaluations.

There have been only two other times since the pandemic began that Americans were as pessimistic about the coronavirus situation as they are now: July 2020 and November 2020. 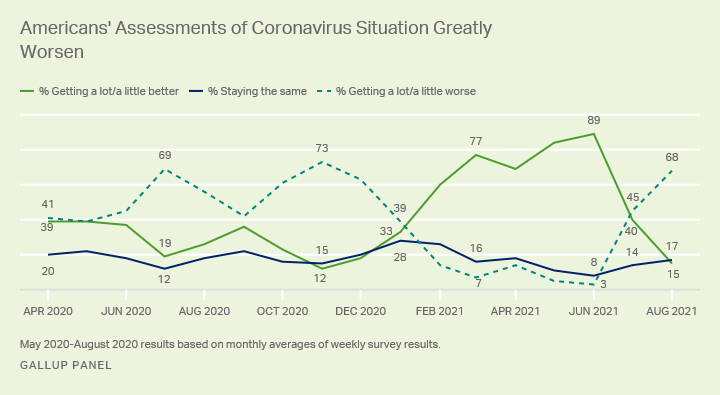 Line graph. Trend in Americans' assessments of the U.S. coronavirus situation. In the most recent survey, from August 2021, 68% of U.S. adults said the coronavirus situation was getting worse, 17% said it was staying the same and 15% said it was getting better. The current assessment is among the most negative to date. Americans have been much more optimistic than pessimistic for most of 2021.

The majority of Americans now expect the economic and societal disruptions tied to the pandemic to last beyond the end of this year. Sixty-three percent believe the disruptions will continue into next year, up from 42% in July and 17% in June.

Growing Concern About Catching the Coronavirus

Americans are becoming increasingly worried about getting COVID-19. After double-digit increases in each of the past two months from the trend's low point of 17% in June, 39% of U.S. adults are now very or somewhat worried about getting the coronavirus. Concern has not been this high since February, though it remains well below where it was before vaccines were available. The monthly high point in worry was 58% in November. 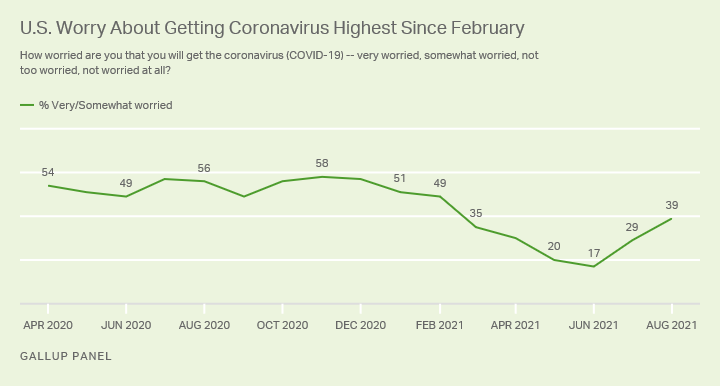 Line graph. Trend in Americans' concern about getting the coronavirus. Thirty-nine percent are very or somewhat worried about getting the coronavirus in August 2021, up from 17% in June and 29% in July. The current figure is the highest since 49% were worried in February 2021. Concern was consistently near or above 50% from April 2020 through February 2021. Starting in March, concern began to decline, hitting a low in June before increasing the past two months.

Social Distancing Activity Picking Back Up

In July, as COVID-19 cases were rising and people increasingly saw the situation as getting worse, they were not yet adjusting their behavior to reflect the changing conditions. That has changed now, albeit modestly and not to the same level seen earlier in the pandemic.

The August survey finds that 24% of U.S. adults are "completely" or "mostly" isolating themselves from people outside their household, the first meaningful upward movement in this trend since November. Fewer, however, are practicing strict social distancing now than were in April, when many Americans who planned to be vaccinated had not yet gotten their shots. At the beginning of the pandemic, three-quarters of Americans were doing so. 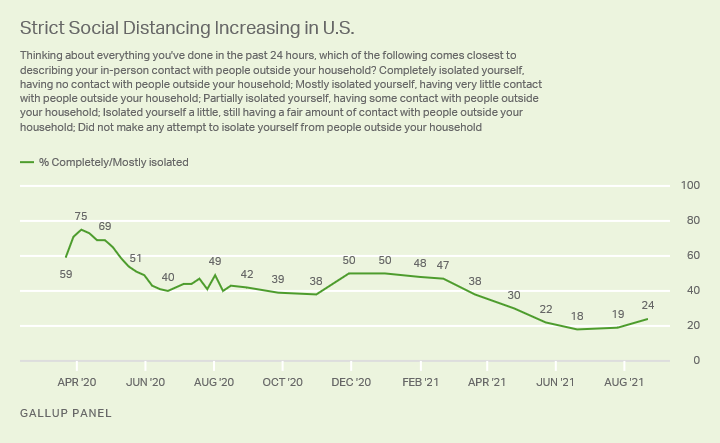 Likewise, more Americans than in July are practicing a variety of COVID-19 prevention measures, including avoiding large crowds, avoiding public places, avoiding small gatherings, and wearing face masks in public. Still, the use of masks is the only activity that a majority of Americans are currently doing.

All of these practices remain far less common today than they were earlier this year, before vaccination became widespread and coronavirus cases steadily declined.

The survey also asks people which types of public places they have visited in the past 24 hours, such as their workplace, various types of stores or a doctor's office. The percentages reporting visiting public places have generally been stable over the past few months. However, in August, compared with July, slightly fewer Americans say they visited someone else's house (down from 33% to 28%) or a restaurant (39% to 35%) in the past 24 hours.

Just a couple of months after it looked like the coronavirus pandemic might be coming to an end, infections have come roaring back in the U.S., fueled by the virus' delta variant, particularly in states with lower vaccination rates. Americans are more likely now than at almost any other point in the pandemic to say the situation is getting worse. And while concern about getting the virus has been growing and coronavirus avoidance behaviors are starting to rise, they remain well below where they were before much of the population was vaccinated.

Results for this Gallup poll are based on self-administered web surveys conducted Aug. 16-22, 2021, with a random sample of 3,553 adults, aged 18 and older, who are members of the Gallup Panel. Gallup uses probability-based, random sampling methods to recruit its Panel members.