WASHINGTON, D.C. -- Germans' ratings of their lives are in a tailspin as they head to the polls on Sunday and prepare to face a future without longtime Chancellor Angela Merkel. Four in 10 Germans surveyed this spring rated their lives positively enough to be considered thriving. This is lower than the ratings Germans have given their lives at most points throughout Merkel's 16 years in office and is a sharp departure from their ratings over the past few years, suggesting Germans may be ready for change. 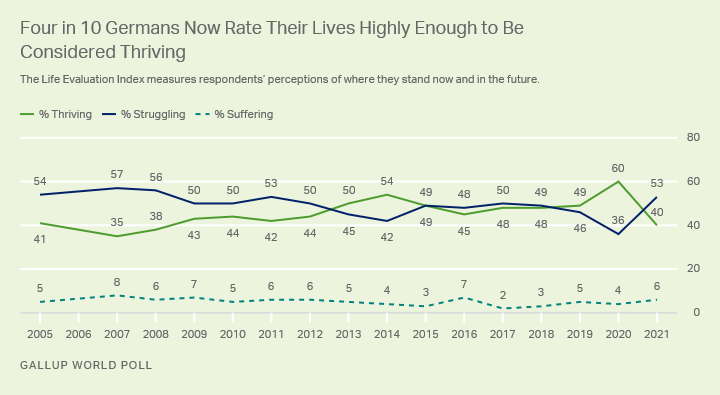 Line graph. Trend from 2005 to 2021 in the percentages of Germans who, based on their life ratings, are considered thriving, struggling and suffering. In 2021, 53% are considered suffering, 40% thriving and 6% suffering.

Gallup classifies individuals as "thriving," "struggling" or "suffering" according to how they rate their current and future lives on a ladder scale with steps numbered from 0 to 10, based on the Cantril Self-Anchoring Striving Scale. Those who rate their current life a 7 or higher and their anticipated life in five years an 8 or higher are classified as thriving.

The latest data for Germany come from a survey conducted from May to June of this year, as the German government was lifting lockdown restrictions for fully vaccinated individuals. As Germany emerged from months of restrictions, 40% of Germans classified their lives highly enough to be considered thriving. This was down substantially from the 60% who were considered thriving in 2020, when the government had instituted COVID-19 control measures but the pandemic had not affected Germany as badly as other European countries.

Germans go to the polls on Sunday to vote in the country's parliamentary elections, which, for a generation of Germans, will be their first election without Merkel. Her political party, the Christian Democratic Union (CDU), is reportedly trailing in the polls. The party has suffered losses in several recent elections, most notably in 2017, when the CDU had a series of defeats in the states that make up the former East Germany.

There have been persistent divisions between East and West Germans' evaluations of their lives. Through most of Gallup's trend, people in the former East Germany[1] have rated their lives worse than those in the rest of the country (West Germany)[2]. For instance, in September 2019, before the pandemic, 55% of West Germans were thriving, compared with 39% in the East. However, during the pandemic, the gap narrowed substantially, and this past spring, East Germans were modestly more likely than those in the West to be thriving, 45% vs. 39%.

Germans' Confidence in Government Up Under Merkel

In late 2005, a coalition government of the CDU and the Social Democratic Party (SPD) was formed, bringing Merkel to office. Earlier in 2005, Germans' confidence in their national government was low, with 66% saying they did not have confidence and 32% reporting they did. For the first six years of her administration, confidence in the institution fluctuated. However, beginning in 2012, Germans' confidence in their national government generally trended upward, peaking at 65% during the pandemic in 2020. As Merkel exits, there has been a modest decline to 60%. But that is still 28 percentage points higher than when she took office. 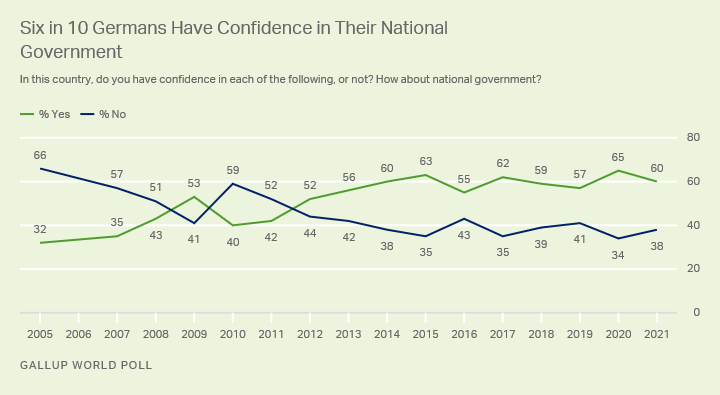 Gallup first asked Germans if they approved of the job Merkel was doing as chancellor in 2008. At that time, 63% approved, while 32% disapproved. Merkel's job approval would dip after that, but it never fell below the 51% measured in 2011. Since 2012, at least 60% of Germans have consistently approved of the job Merkel is doing as chancellor. Merkel's approval peaked at 76% during the pandemic in 2020 and slid modestly to 71% this spring. 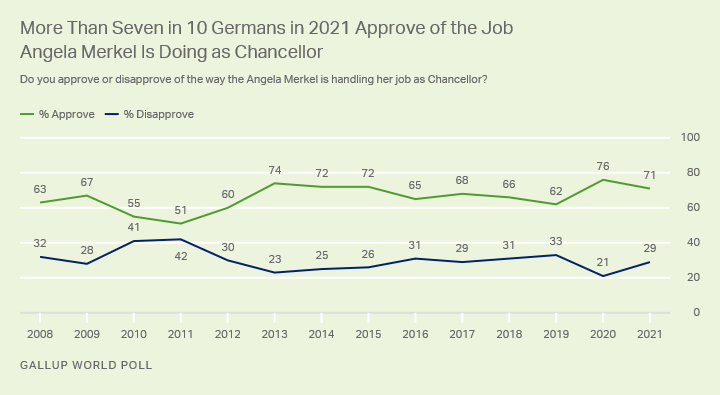 As Merkel prepares to leave office, roughly the same percentage of Germans are thriving as when she took office in November 2005. The percentage of thriving Germans may have been higher had the COVID-19 pandemic not occurred. The downturn in life evaluations may help explain the trouble her party appears to be in. This is potentially exacerbated by her exit, which may affect trust in the country's national government -- a metric that has nearly doubled during her time as chancellor.

Merkel has defined German politics for the last decade and a half, and a large majority of Germans continue to approve of the job she's doing in her last year in office. What comes next is clearly the biggest question for the country. While any successor to Merkel would institute change, there is likely to be more of it under a chancellor of a different party. The extent of the change will have a substantial impact, not just on Germany, but on the European Union and German global leadership.

[1] East Germany is made up of the German states of Brandenburg, Mecklenburg-Vorpommern, Saxony, Saxony-Anhalt and Thuringia.

These results are based on landline and mobile telephone interviews with 1,000 adults, aged 15 and older, conducted in Germany May 3-June 10, 2021. For results based on the total sample of national adults, the margin of sampling error is ±4.6 percentage points at the 95% confidence level. The margin of error reflects the influence of data weighting. In addition to sampling error, question wording and practical difficulties in conducting surveys can introduce error or bias into the findings of public opinion polls.