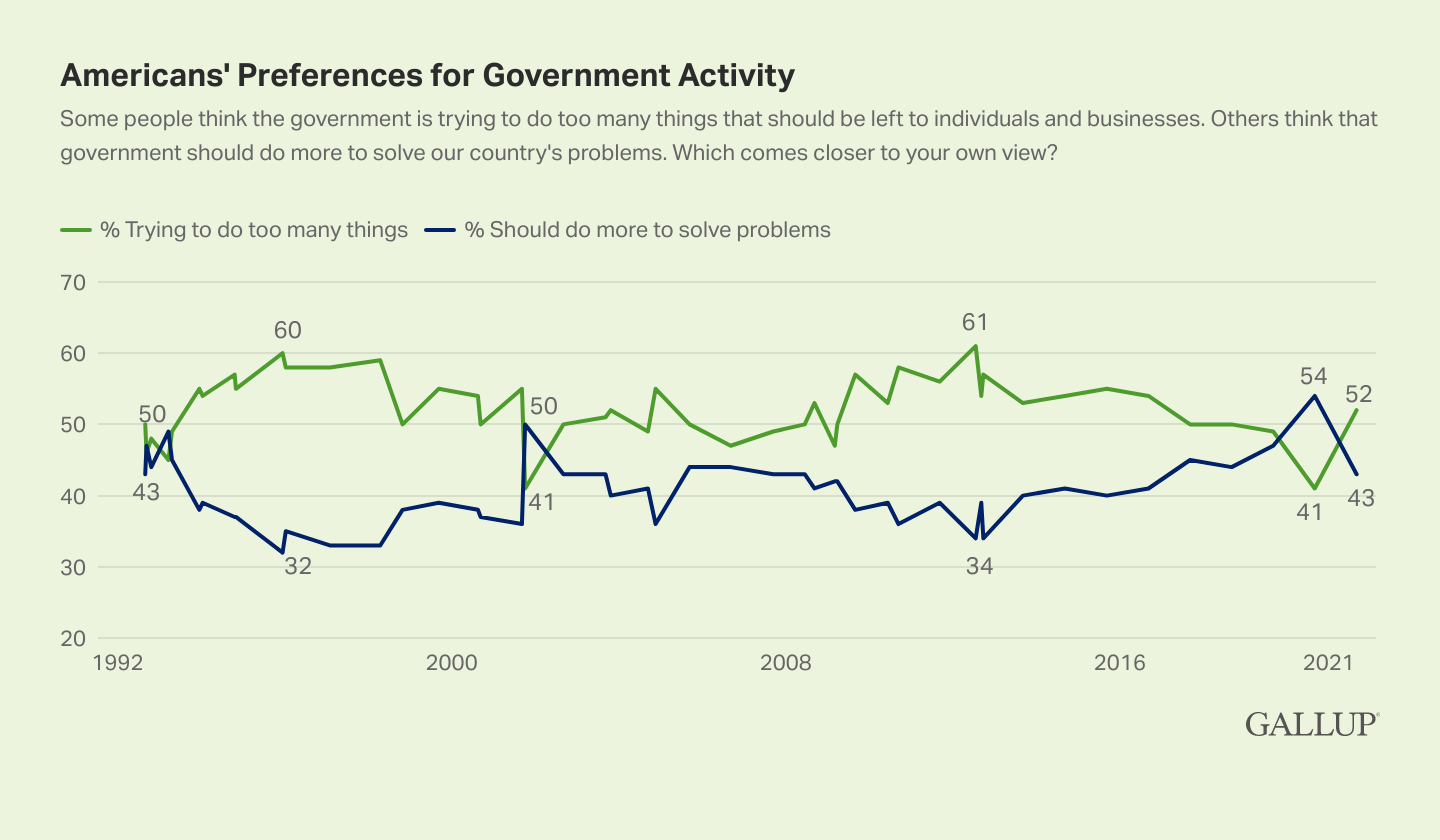 Line graph. Trend in Americans' preference for government activity. Fifty-two percent of U.S. adults say the government is doing too many things that should be left to individuals and businesses while 43% say the government should do more to solve the country's problems. Last year, opinions were reversed, but the current figures are in line with what Gallup has typically measured since 1992.

Gallup's question on the proper government role is asked as part of its annual Governance survey, conducted Sept. 1-17 this year. The shift toward favoring a more active government role in 2020 was seen among Democrats and independents but not Republicans -- likely a response to the coronavirus pandemic and in particular to then-President Donald Trump's approach to handling it. Trump generally opposed government efforts designed to slow the spread of the virus, such as face mask requirements and business and school closures.

Last year marked only the second time in Gallup's 29-year trend that at least half of Americans endorsed an active role for the government on this item. The other pro-government response came in the weeks after the 9/11 terror attacks amid heightened concern about terrorism and a surge in trust in government.

All party groups are less likely now than a year ago to favor a more active government role, but independents' opinions have changed the most. In 2020, 56% of independents wanted the government to do more to solve problems, compared with 38% now. Independents are even less inclined to want a more active government role today than they were in 2019 before the pandemic began, when 45% held that view. The same is true of Republicans, whose opinions did not show meaningful change last year.

In the five times Gallup has asked this question since 1993, the preference for lower taxes and fewer services has consistently prevailed, held either by pluralities or majorities of Americans, including a high of 56% in 2011. Only as many as 25%, in 2019, have said they wanted higher taxes and more services. 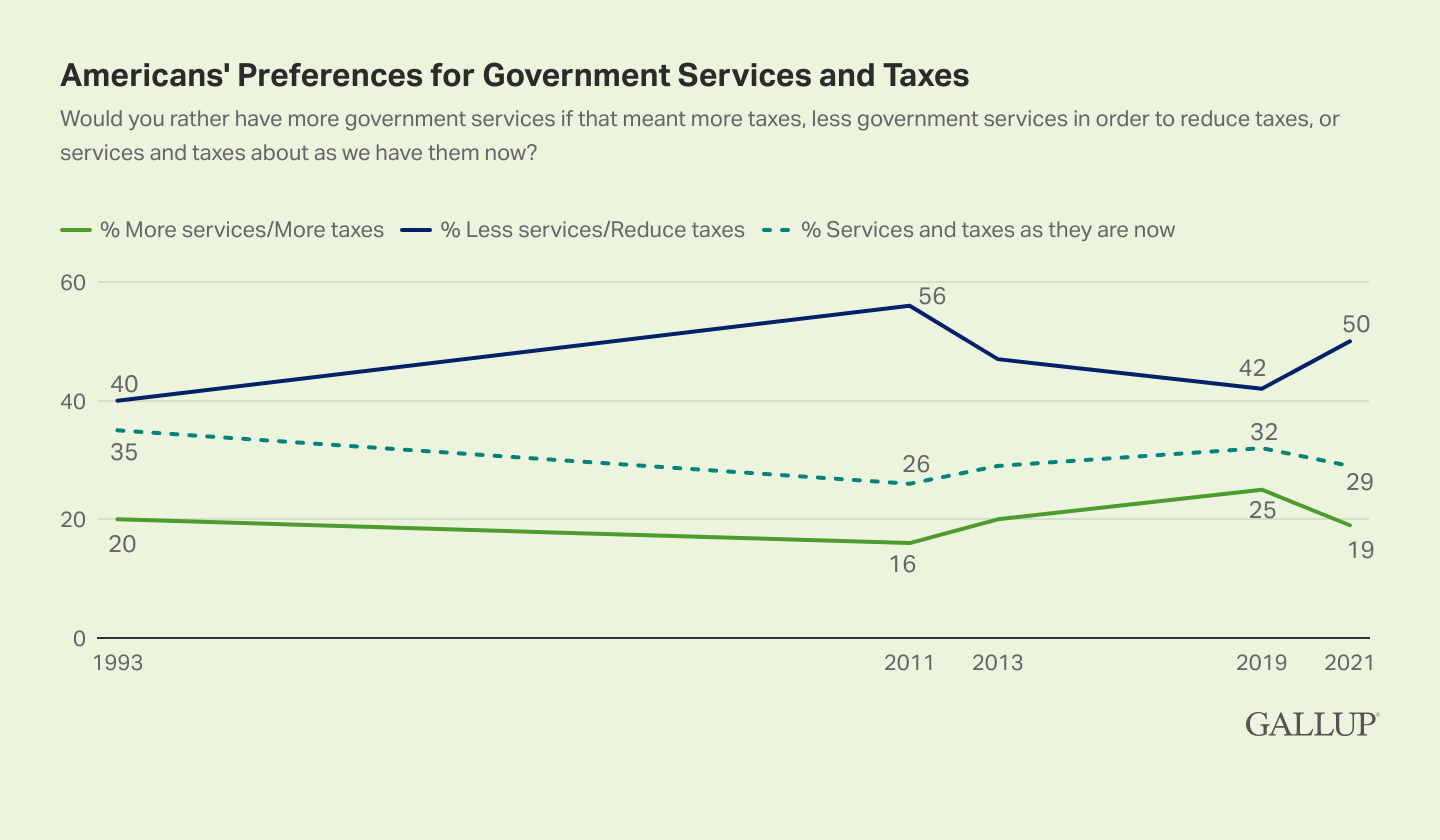 Gallup did not ask this "taxes versus government services" question last year, so it is not possible to know how opinions on the issue might have changed in a year when Americans said they wanted government to do more to solve the nation's problems.

Democrats are mostly split between wanting more services and more taxes (37%) and keeping taxes and services where they are now (40%). Nineteen percent of Democrats prefer lower taxes and fewer services.

Majority Continues to Say Government Has Too Much Power

Consistent with their preferences for lower taxes and fewer services and their belief that the government is doing too many things, 54% say the federal government has too much power. This is essentially unchanged from 56% the last time the question was asked in 2019. 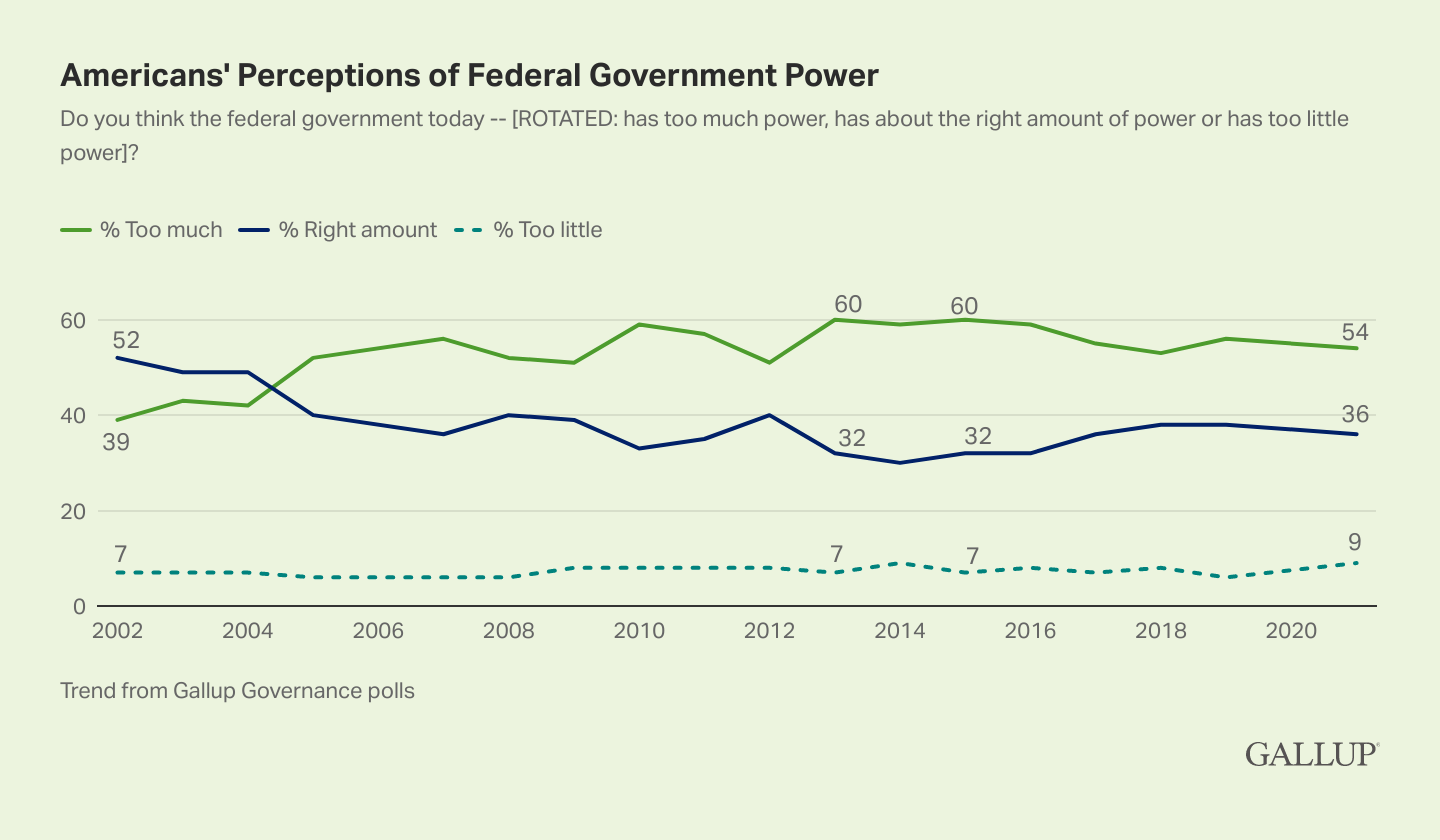 Although Americans' opinions about federal government power are essentially unchanged since 2019, partisans' views have changed as the presidency switched from Republican Trump to Democrat Joe Biden. Two years ago, the party differences were much smaller than they are today, with 61% of Republicans, 57% of independents and 51% of Democrats saying the government had too much power.

Americans More Inclined to Say Government Regulating Business Too Much

This shift is consistent with the last time the presidency changed from Republican to Democratic control. Spanning the transition from Republican George W. Bush to Democrat Barack Obama between 2008 and 2009, the percentage saying there was too much government regulation also increased seven points, from 38% to 45%.

Opinions moved in the other direction after the White House transitioned from Obama to Trump, though the change was not evident until Trump's second year in office in 2018. In 2016, 47% of U.S. adults thought the government regulated business too much, compared with 45% in 2017 and 39% in 2018. 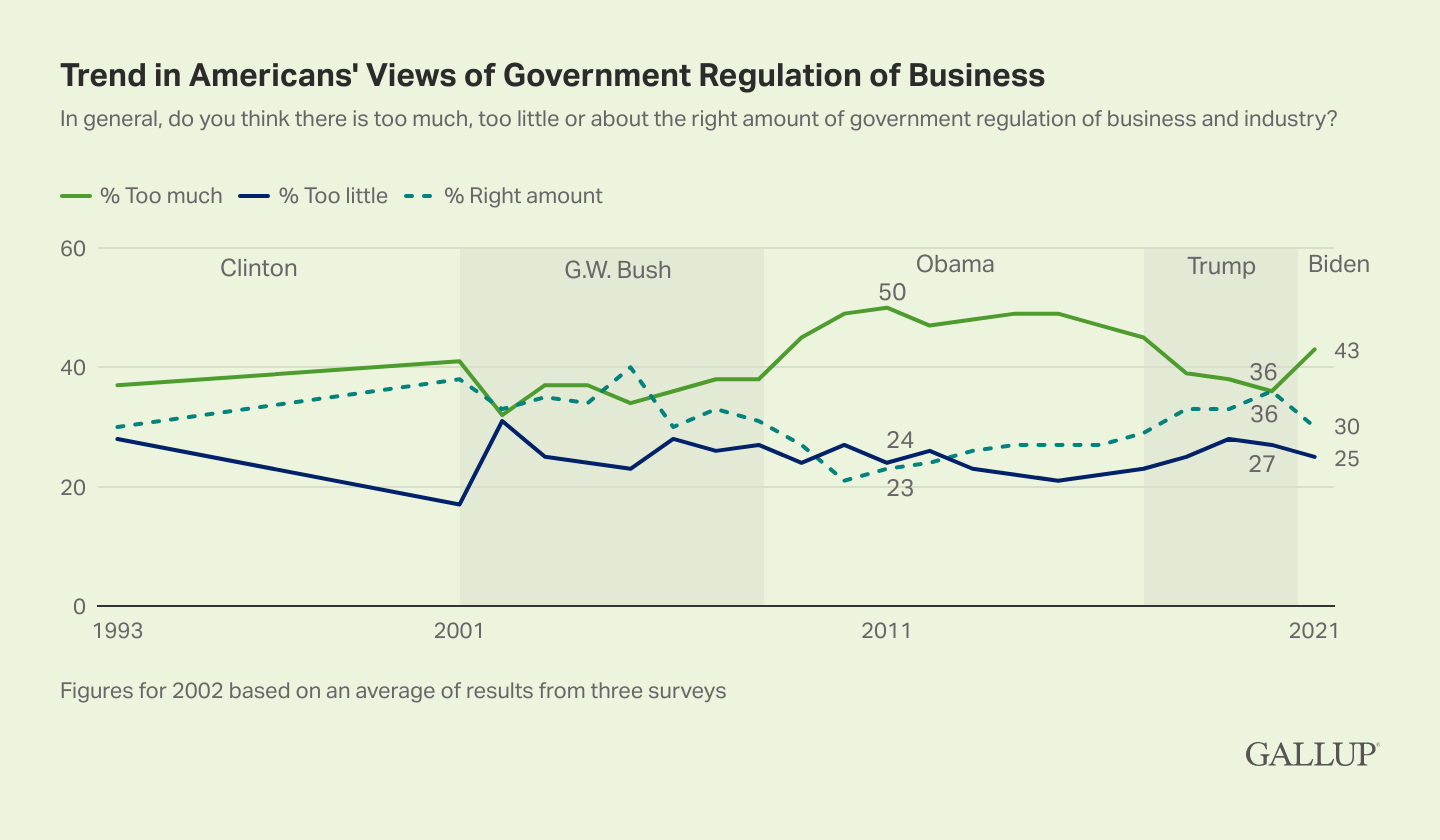 More Americans typically prefer a limited government role to an active one, think there is too much rather than too little regulation of business and believe the government is too powerful. The COVID-19 situation and the Trump administration's response to it in 2020 may have briefly changed Americans' views on the proper government role, but whatever effect it had has now disappeared. That could reflect changing government policy on the issue as Biden has been more assertive in using government power to take steps to mitigate the spread of the disease than Trump did. For example, Biden has imposed face mask and vaccine mandates for situations in which his administration believes the federal government has the authority to do so. Those steps have been controversial, and the controversy might have swayed some people -- particularly independents -- into thinking such a strong government response is not ideal.

But the reversal in opinions on government activity also may simply reflect a return to normal attitudes, similar to what occurred after 9/11 when Americans at least briefly advocated for a more active government role to deal with a national challenge, before reverting to favoring a more limited approach.