WASHINGTON, D.C. -- Americans by significant margins now view the Republican Party as better than the Democratic Party at protecting the nation from international threats (54% to 39%, respectively) and at ensuring the nation remains prosperous (50% to 41%). The 15-percentage-point GOP advantage on security matters is its largest since 2015, while its nine-point edge on prosperity is its largest since 2014. Last year, the GOP had a narrow advantage on international matters while the parties were essentially tied on economic matters. More of this change has come from declines in Americans perceiving the Democratic Party as better on these issues than from increases for the Republican Party.

Meanwhile, the public is narrowly divided (41% Republican Party, 38% Democratic Party) as to which party can better handle whichever issue it deems the most important facing the country. Americans most commonly name the coronavirus pandemic or the government itself as the most important problem.

The latest results are from Gallup's annual Governance survey, conducted Sept. 1-17. The survey was conducted just after the chaotic U.S. withdrawal from Afghanistan and amid heightened numbers of coronavirus infections and a weaker-than-expected U.S. employment report.

The 39% of Americans saying the Democratic Party will do a better job in the next few years of protecting the U.S. from terrorism and other international threats is down significantly from 46% last year. At the same time, there has been a smaller increase in the percentage of U.S. adults perceiving the Republican Party as better in this area, from 50% to 54%. 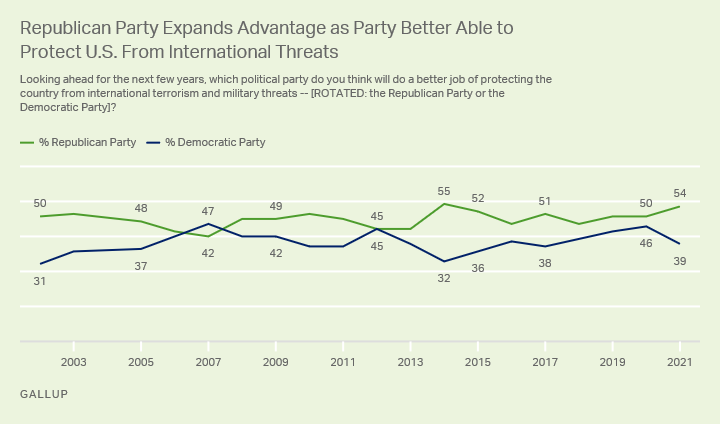 Line graph. Americans' perceptions of which political party can better protect the United States from international terrorism and other military threats. In 2021, 54% say the Republican Party is better and 39% say the Democratic Party is. The Republican Party has led most years except 2007 and 2012. Its advantages had typically been in the single digits from 2016 through 2020 before expanding this year to 15 points.

Americans typically see the Republican Party as more capable on national security matters, but the 15-point gap in favor of the GOP this year is the largest since a 16-point advantage in 2015. The party had an even larger 23-point gap in 2014, a time when the Obama administration was struggling to deal with the rise of the Islamic State in Iraq and renewed Middle East violence, among other issues.

As is the case on international matters, there has been a seven-point drop in the percentage of Americans who say the Democratic Party is better able to keep the U.S. prosperous, from 48% to 41%. Now, 50% say the Republican Party is better, compared with 47% in 2020.

Republicans have had at least a small advantage on this for most of the past decade, with the current nine-point lead tying 2011 and 2014 as the largest for the GOP during this period. The only years since 2010 that Republicans have not led are 2012 and 2020, the two years in which Democratic candidates were elected president.

The last time that at least half of U.S. adults said the Republicans were better at keeping the country prosperous was in 1989, although there have been several measures of 48% or 49% since then. 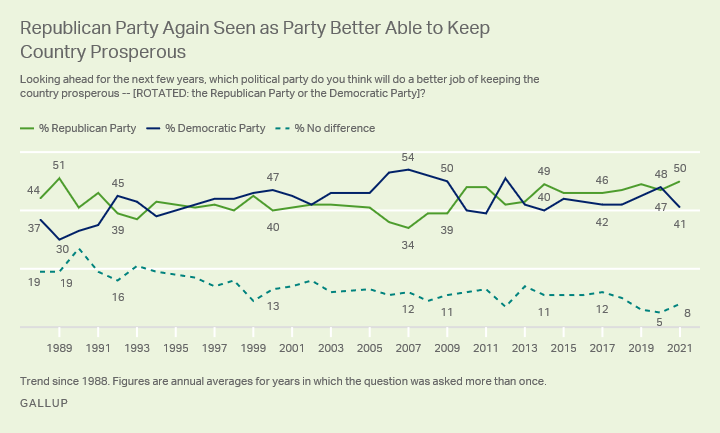 From 1992 through 2009, Americans typically said the Democratic Party was better at keeping the country prosperous, including advantages ranging between 11 and 20 points the last four years of that period. Those latter years spanned the housing market crash, the financial crisis and the Great Recession, which began while Republican George W. Bush was president.

Handling the 'Most Important Problem'

By 41% to 38%, U.S. adults say the Republican Party rather than the Democratic Party can better handle whichever problem they name (in an open-ended question format) as the most important facing the country. Last year, 47% said the Democratic Party and 39% said the Republican Party could better address the most important problem, when the coronavirus pandemic, the government and race relations were most commonly named as that issue.

This year, again, the coronavirus pandemic and government rank as the top two problems.

In both 2020 and now, those identifying the coronavirus as the most important problem widely say the Democratic Party can better handle it, including a 57% to 28% Democratic edge this year.

By contrast, those naming the government as the top problem are much more inclined to say the Republican Party can better handle it (60% to 19%), whereas last year, when President Donald Trump was in office, more said the Democratic Party could (51% to 44%). To a large degree, this shift reflects wide party differences this year in perceptions that the government is the most important problem, with 31% of Republicans but only 9% of Democrats naming it. Last year, 29% of both Democrats and Republicans said the government was the most important problem.

Historically, Democrats have more often had an edge in terms of being perceived as better able to handle whichever problem Americans think is most important. However, opinions have mostly been closely divided. The largest advantage for either party came in 2006 and 2007, when Democrats held leads of 17 and 15 points, respectively, at a time when Americans considered the war in Iraq to be the top problem. 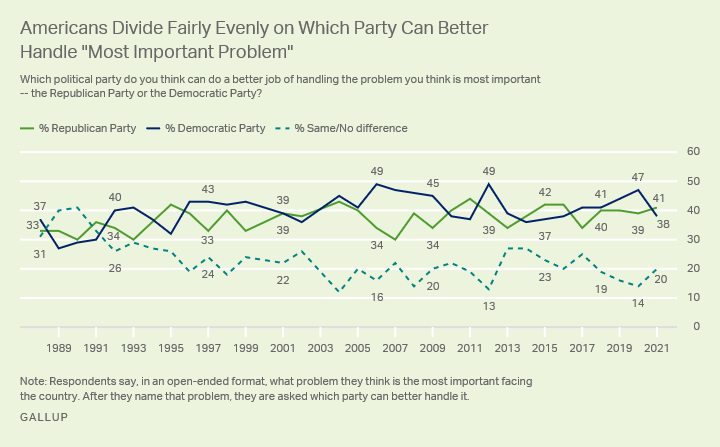 Line graph. Americans' perceptions of which political party can better handle whichever problem they think is the most important facing the country. Forty-one percent say the Republican Party can better handle that problem, while 38% say the Democratic Party can and 20% do not see either party as better. Democrats have usually led on this though the advantages have been small in most years.

As might be expected, Republicans and Democrats overwhelmingly view their preferred party as better able to handle the most important problem, to keep the country safe from international threats and to keep the country prosperous. Thus, when perceptions of which party is better able to handle these issues change, as occurred this year, independents are usually behind those shifts.

Since last year, there have been double-digit declines in the percentages of independents who say the Democratic Party is better at handling the most important problem (from 42% to 31%), at keeping the nation secure (from 43% to 31%) and at keeping the nation prosperous (from 47% to 35%).

Republicans' gains on these same issues have been smaller, as some independents have shifted to saying neither party is better able to handle these issues. There has been an eight-point increase among independents in saying the Republican Party is better at keeping the country prosperous (from 43% to 51%), a five-point increase for keeping the nation secure (from 48% to 53%) and a nonsignificant two-point change on the most important problem (from 29% to 31%).

Americans now generally see the Republican Party as better than the Democratic Party at handling two key government objectives -- protecting citizens from international threats and promoting a strong economy. Despite these issue advantages, the Democratic Party still maintains a slight edge in overall favorability, as it has for nearly all of the past decade even as the GOP has typically led on these issue measures. These results, therefore, suggest the Republican Party has not been able to translate its competence edge on key issues to a more positive image of the party overall.

While advantages in party favorability and perceived issue competence are desirable heading into next year's midterm elections, it is not clear that either will be necessary to achieve success. In the last three midterm elections, neither party had a significant edge in favorability, but Democrats had a strong showing in 2018 and the Republicans did in 2010 and 2014. And while Republicans had advantages in perceived handling of national security and the economy in 2010 and 2014, they also did in 2018.

Most often, performance in midterm elections hinges on the popularity of the incumbent president at the time of the election. With Joe Biden in office and his approval rating slumping, unless it improves substantially over the next year, Republicans would likely gain seats in Congress in next year's elections, and control of one or both chambers of Congress.