WASHINGTON, D.C. -- Sharply more U.S. gun owners today than in the 2000s say they own a gun for protection against crime. Eighty-eight percent of gun owners cite crime protection as a reason they own a gun, compared with two-thirds giving this reason in 2000 and 2005 surveys.

Meanwhile, similar proportions of gun owners now versus in the past have a gun for hunting or target shooting. 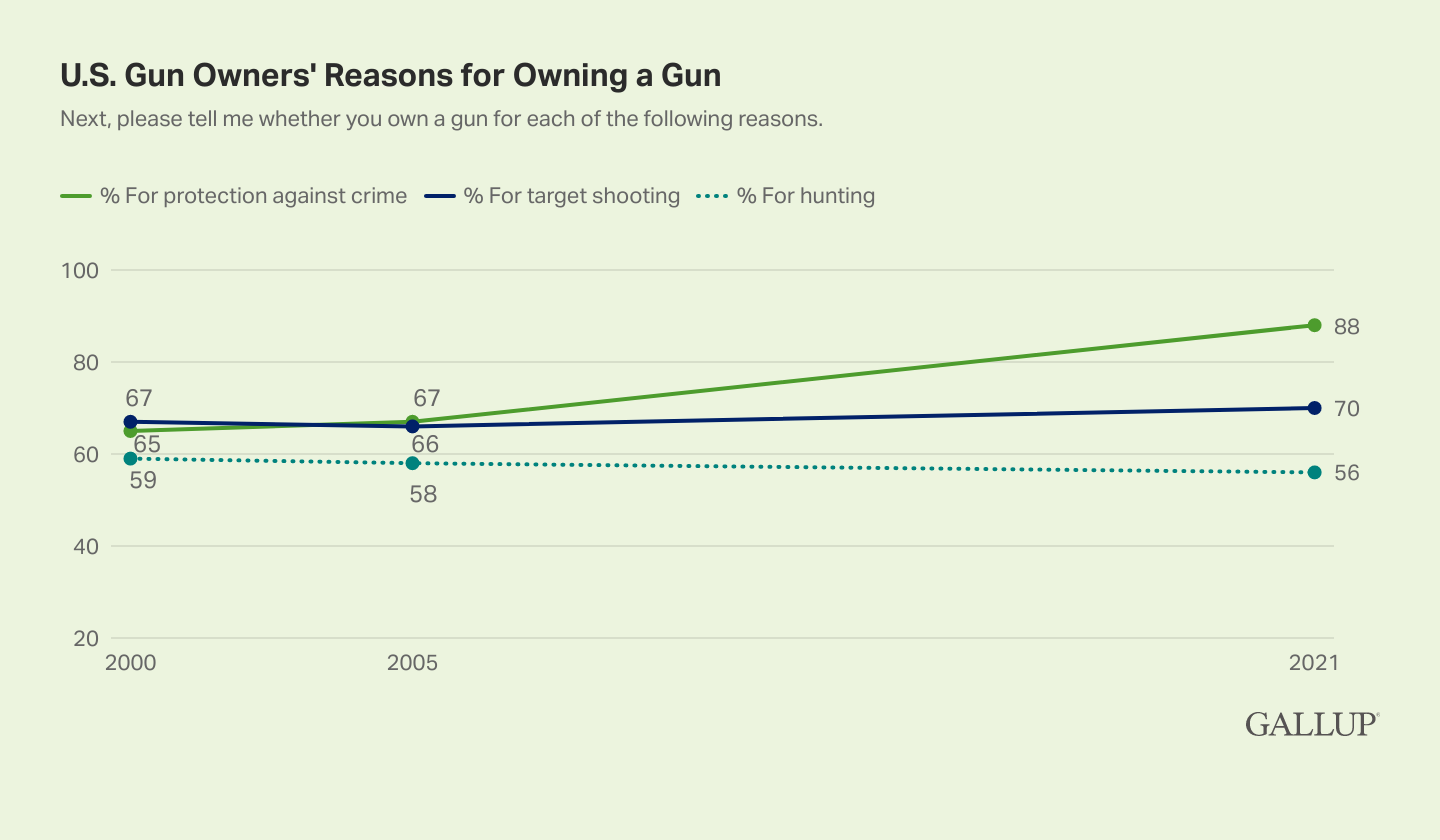 The latest results are based on Gallup's annual Crime survey, conducted Oct. 1-19. Gallup last asked gun owners why they owned guns, using this question format, in 2005. At that time, roughly as many gun owners said they owned a gun for target shooting (66%) as for crime protection (67%), with fewer having guns for hunting (58%). But crime protection has now emerged as the dominant reason.

Polling was done shortly after the FBI's annual crime report documented a record one-year increase in the murder rate between 2019 and 2020, which may have made personal protection more salient in gun owners' minds than in past years. Gallup finds that Americans perceive increased crime in their area and in the U.S., more generally. While perceptions of increased crime are more common today than when Gallup asked about gun ownership in 2000, they are similar to what they were in 2005. Crime victimization rates are also similar today to what they were in 2000 and 2005, if not slightly lower.

The shift toward crime as the most likely reason for owning a gun likely occurred well before now. U.S. gun owners also primarily mentioned protection against crime when Gallup in 2013 and 2019 asked, in an open-ended format, why they owned guns. In the open-ended questions, owners mentioned reasons beyond protection or sporting activities, including that they have guns that are family heirlooms, use a gun as part of their job or are exercising their Second Amendment rights.

Nearly One-Third of U.S. Adults Own a Gun

Thirty-one percent of U.S. adults say they personally own a gun. Personal ownership has generally held around 30% since Gallup first measured it in 2000.

Another 13% of U.S. adults say a household member other than themselves owns a gun. At 44%, household gun ownership is down slightly from where it was in the early 1990s, when between 50% and 54% of Americans said they had a gun in their home or on their property. Household gun ownership has generally been in the low to mid-40% range since 1996. 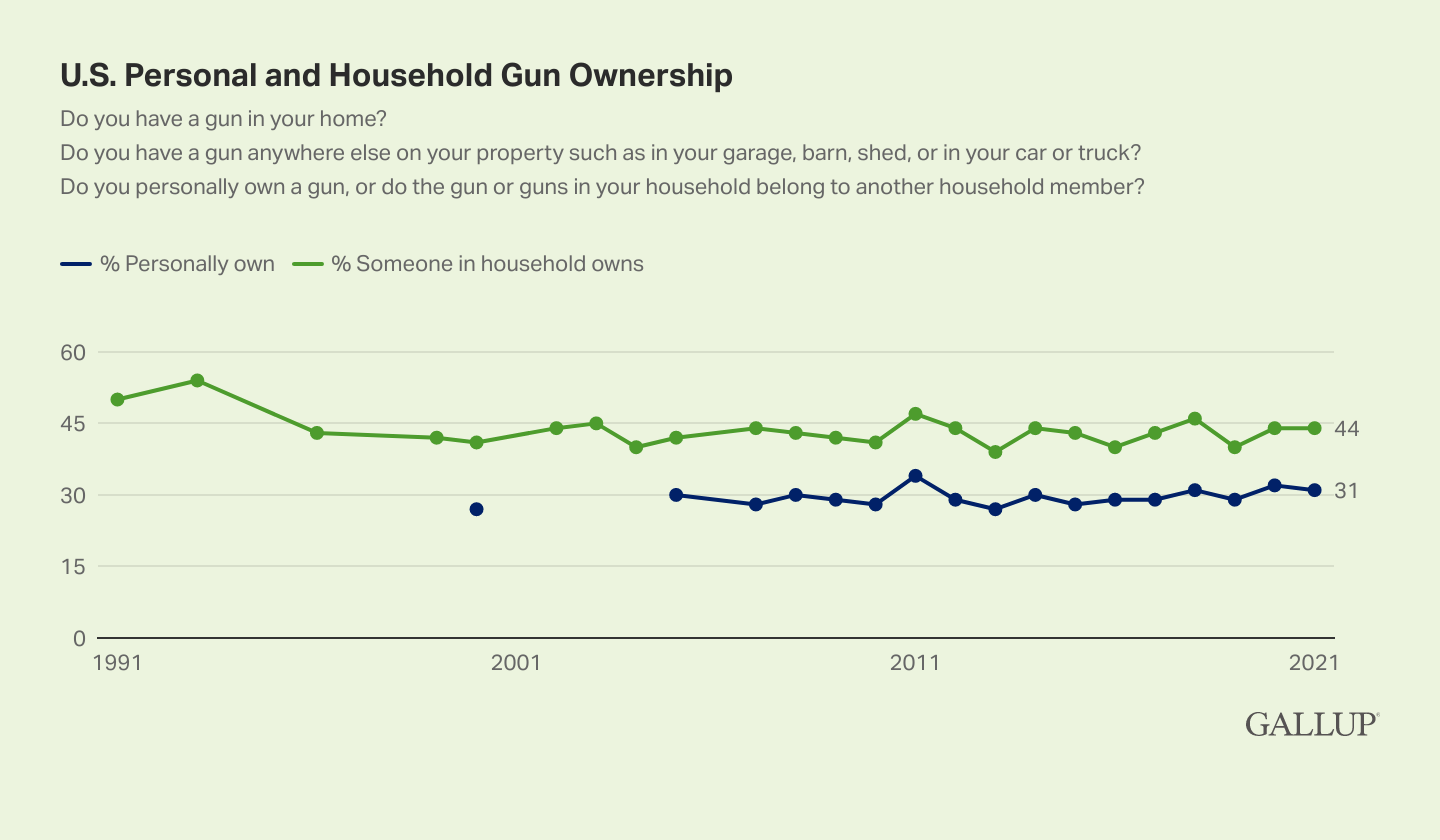 Although U.S. gun ownership has remained relatively stable over the past 20 years, crime protection has surged among gun owners as the reason they own one. The vast majority of gun owners now say they purchased a firearm to protect themselves against crime. While crime protection has been a commonly cited motivation for owning a gun in the past, it was nowhere near as dominant a reason as it is today, and not much more common than other reasons such as target shooting or hunting.

Americans' attitudes about gun ownership have become more permissive in the past year, with fewer now calling for stricter gun laws and a record low in favor of a ban on handguns.

Results for this Gallup poll are based on telephone interviews conducted Oct. 1-19, 2021, with a random sample of 823 adults, aged 18 and older, living in all 50 U.S. states and the District of Columbia. For results based on the total sample of national adults, the margin of sampling error is ±4 percentage points at the 95% confidence level.

For results based on the total sample of 290 gun owners, the margin of sampling error is ±7 percentage points at the 95% confidence level.