WASHINGTON, D.C. -- Americans' perception that crime in their local area is getting worse has surged over the past year. Fifty-one percent, up from 38% in 2020, say there is more crime in their area than a year ago. Meanwhile, U.S. adults' belief that crime is up nationally remains high, at 74%, little changed from 78% in 2020. Both figures are at or near their peak levels for the past 25 years. 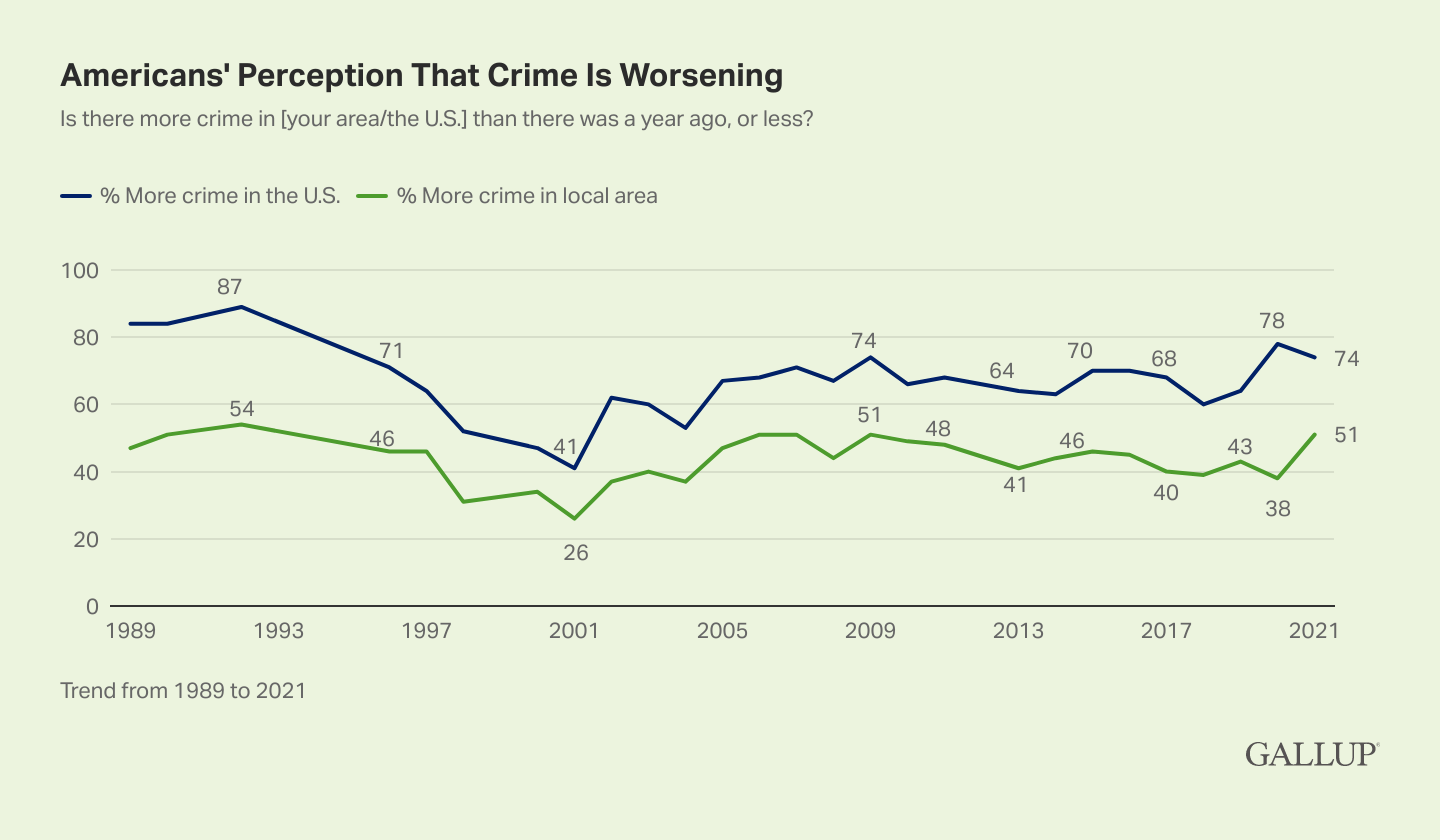 The latest results are based on an Oct. 1-19 poll, conducted shortly after the FBI released its final 2020 crime rate statistics, showing a sharp increase in murders at the same time property crimes declined. However, that likely only confirmed what Americans already knew from preliminary reports, as well as ongoing news of a continued violent crime wave in 2021, particularly in U.S. cities.

The last time a majority of Americans perceived crime as being up in their area was in 2009, and the last time it exceeded today's 51% was in 1992 (then 54%). That is also the high point in this long-term Gallup trend dating back to 1972.

A much higher percentage of adults typically say that crime is worsening in the U.S. than say this about their local area. While on par with the 78% last year saying crime was up nationally, the 74% recorded today is on the high end of the 41% to 78% range seen since 1996.

The low points for both figures were recorded in October 2001. This closely followed the 9/11 attacks, which led to a rally in pro-America sentiments and may have also caused people to view traditional crime as less serious by comparison with terrorism.

Republicans Mostly Responsible for Surge in Concern About Local Crime

This year's increase in Americans' belief that there is more crime in their area than a year ago is mostly explained by a surge among Republicans, rising 29 points from 38% in 2020 to 67% today. There has also been a nine-point increase to 47% among independents, while it has barely changed among Democrats, at 40%.

Related to these partisan differences, the perception that crime is up locally rose more sharply in towns/rural areas (up 20 points) and in the suburbs (up 17) than in big or small cities (up five).

While women are slightly more likely than men to believe crime has worsened where they live, the perception is up by the same amount among both genders -- 13 points -- in the past year.

The recent trend among Republicans could have political implications, as it indicates a level of intensity on the issue not seen for at least two decades.

As a result, the 67% of Republicans now perceiving there is more crime in their area is by far the highest recorded since the start of this trend in 2000. 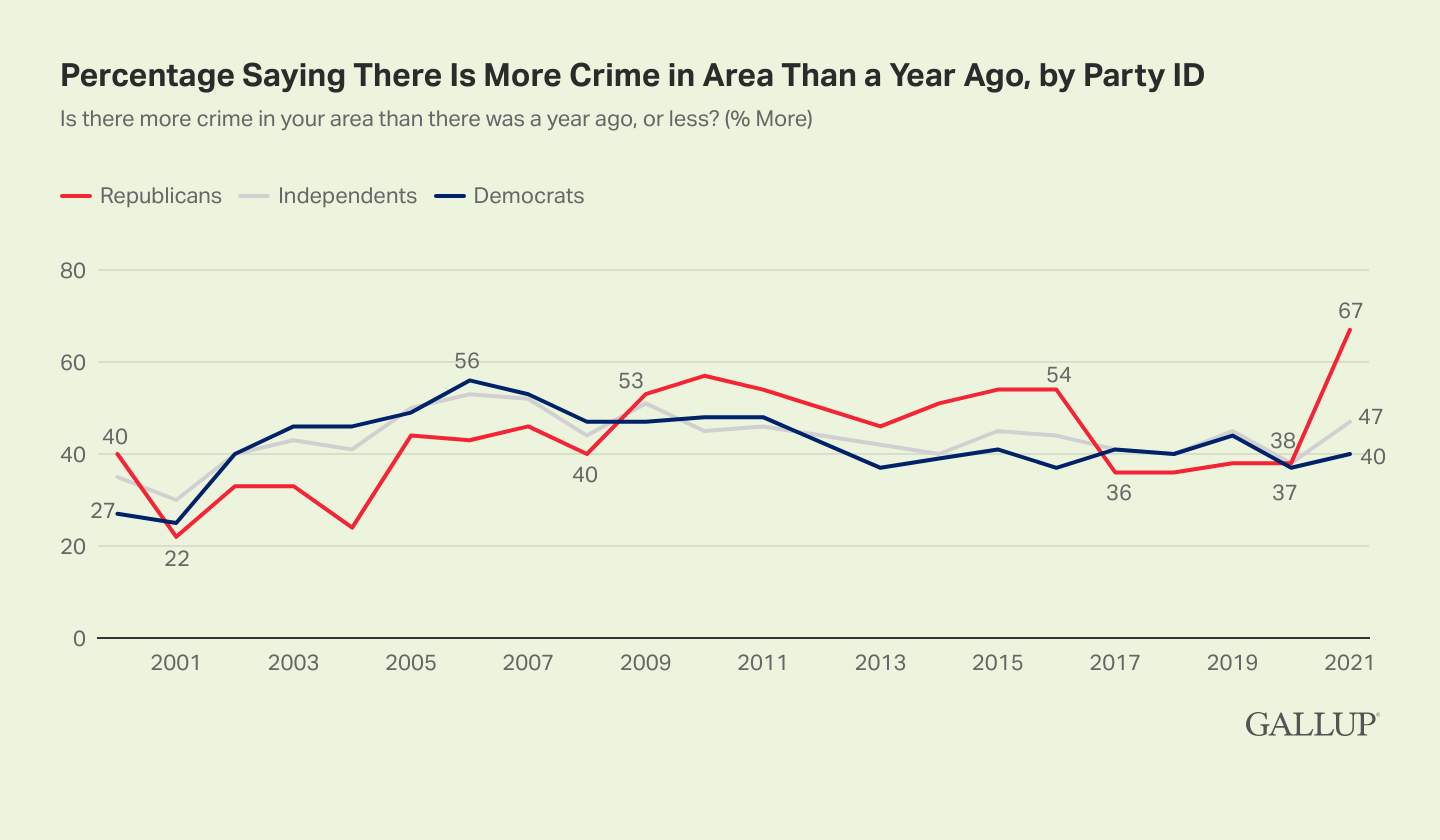 Fear for Personal Safety Back to Normal Level After 2020 Low

Thirty-seven percent of U.S. adults say there is an area near where they live -- "that is, within a mile" -- where they would be afraid to walk alone at night. This is up from 29% last year, the all-time low in Gallup's trend dating back to 1965.

Despite their perception that local crime is up, Americans' personal sense of safety where they live is back to a normal level compared with recent years. Today's 37% who would be fearful is similar to the average 35% across Gallup's yearly measures since 2005. It was consistently higher than that from 1972 to 1993, a period of rising crime and when U.S. violent crime rates were significantly higher than they are today. 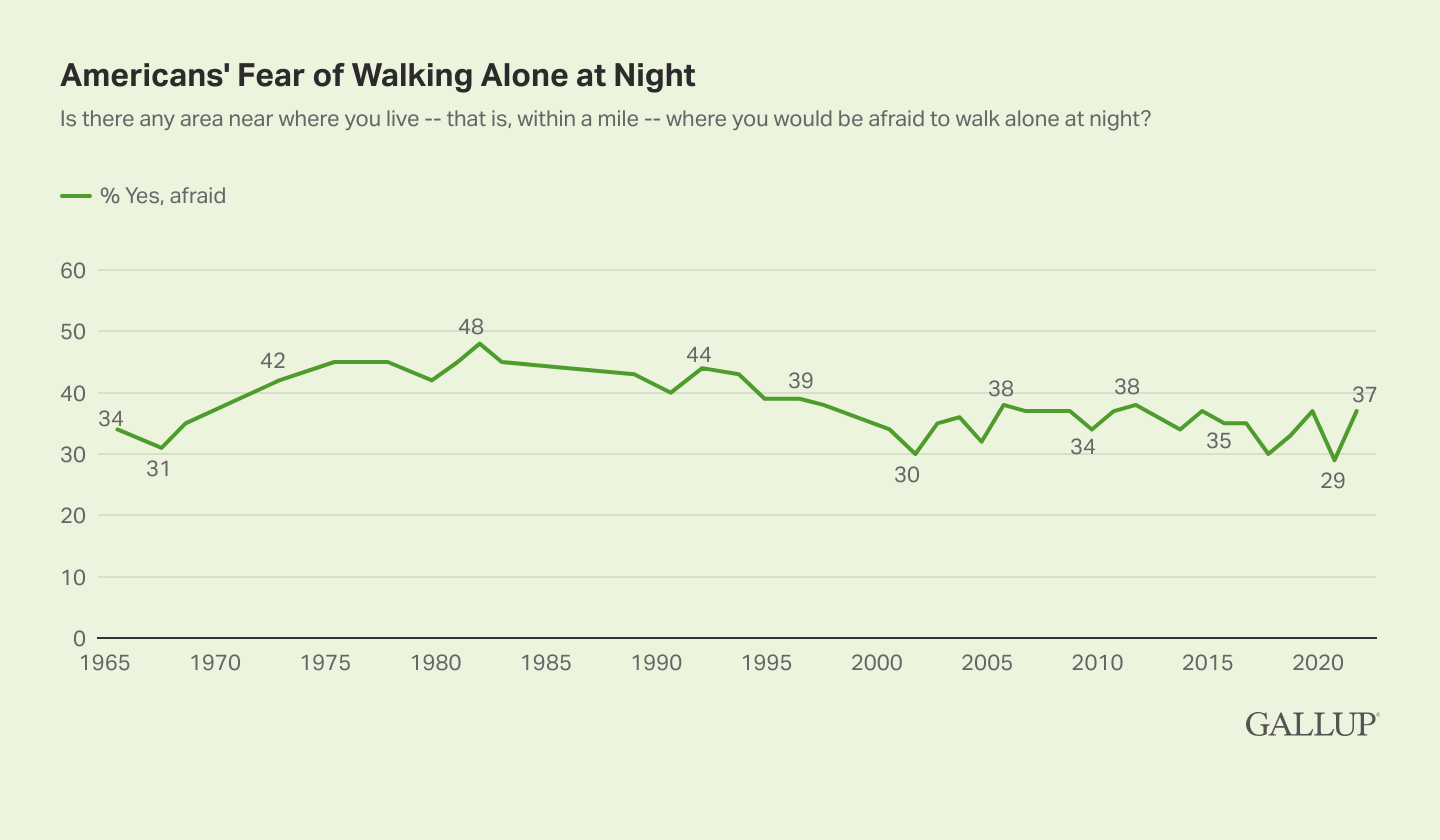 Partisanship is less of a factor in this measure than in perceptions of local crime. Currently, 37% of Republicans, 38% of independents and 38% of Democrats say there is an area near where they live where they would be afraid to walk alone at night.

Separately, Gallup asks Americans to rate the seriousness of the crime problem where they live as well as in the U.S. These perceptions have been largely stable over time, including the last three years. A slight majority today say the crime problem nationally is extremely or very serious (54%), versus 14% saying this about the crime problem in their area. 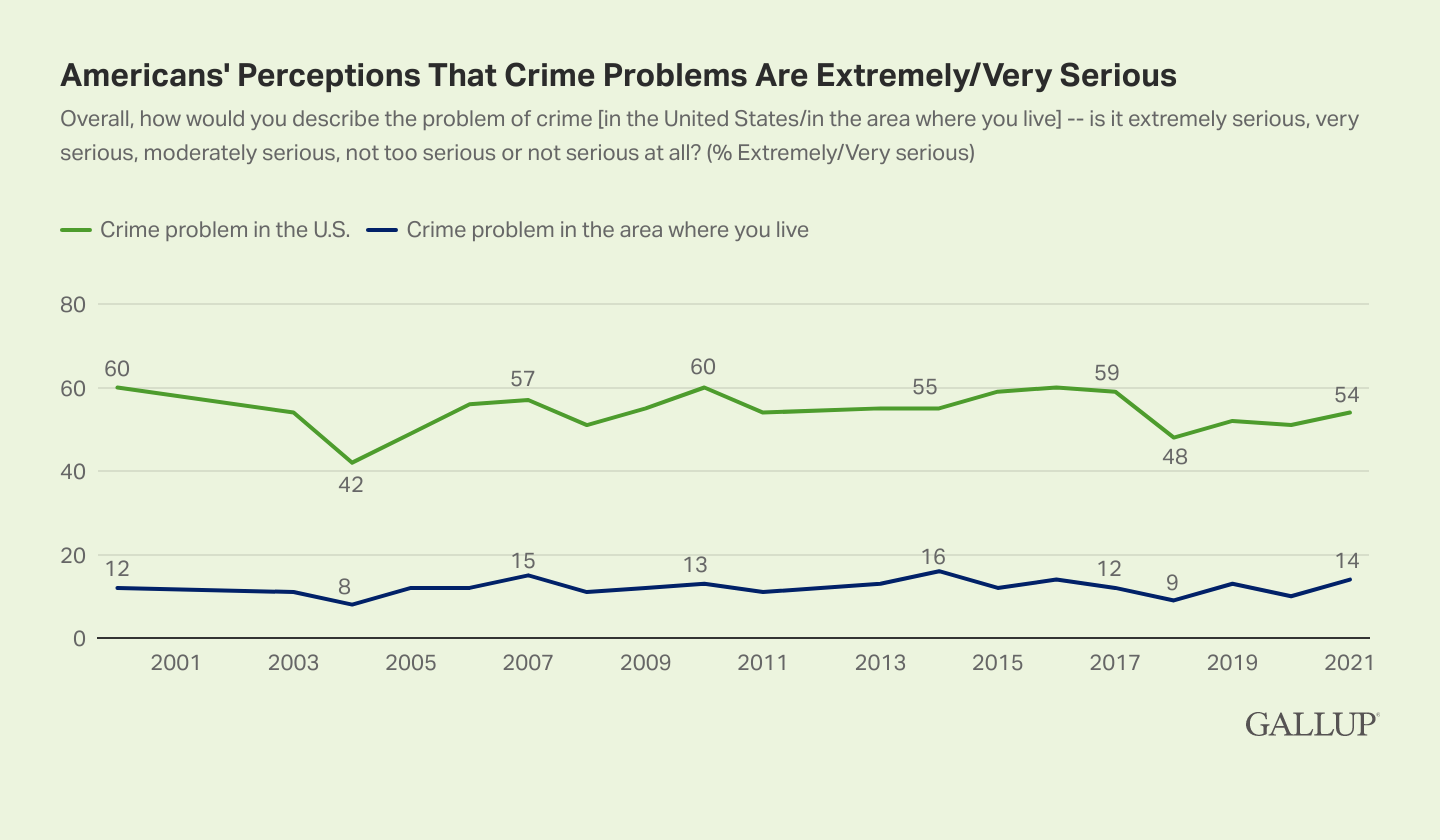 Line graph. Trend from 2000 to 2021 in Americans perception that the crime problem in the U.S. and, separately, the crime problem in the area where you live, is extremely or very serious. In 2021, 54% say the U.S. crime problem is extremely/very serious, whereas 14% describe local crime this way. These figures have been fairly steady over time. The percentage rating the national crime this seriously has ranged from a lot of 42% in 2004 to 60% in 2000 and 2010. The percentage rating local crime this seriously has ranged from a low of 85 in 2004 to a high of 1% in 2014.

Recent news about rising violent crime may be affecting how Americans -- particularly Republicans and, to a lesser degree, political independents -- view the crime problem in their local area, with both groups believing crime is worse where they live. At the same time, public perceptions about national crime haven't changed much, likely because Americans' belief that crime in the U.S. is worse was already high.

So far, the more widespread belief that local crime is worse than a year ago hasn't caused more Americans to describe their local crime problem as highly serious than typically do. It also hasn't translated into extraordinary fear among Americans about walking alone at night in their area, although fear is higher than last year. And as Gallup reports separately, Americans' worry about being the victim of several specific types of crime, including getting mugged and having their home burglarized, has increased but has mainly returned to 2019 levels after dipping in 2020.

Should the murder rate remain high into 2022, that could compel more of a shift in Democrats' views as well as intensify Republicans' concerns, likely making crime an important issue in next year's midterm elections.

Find out Tuesday how safe and secure the world feels in Gallup's 2021 Global Law and Order report.