Fourteen percent of U.S. adults said they, personally, were victimized by a crime, essentially unchanged from last year's 13%. Personal crime victimization rates ranged from 15% to 19% between 2009 and 2016. 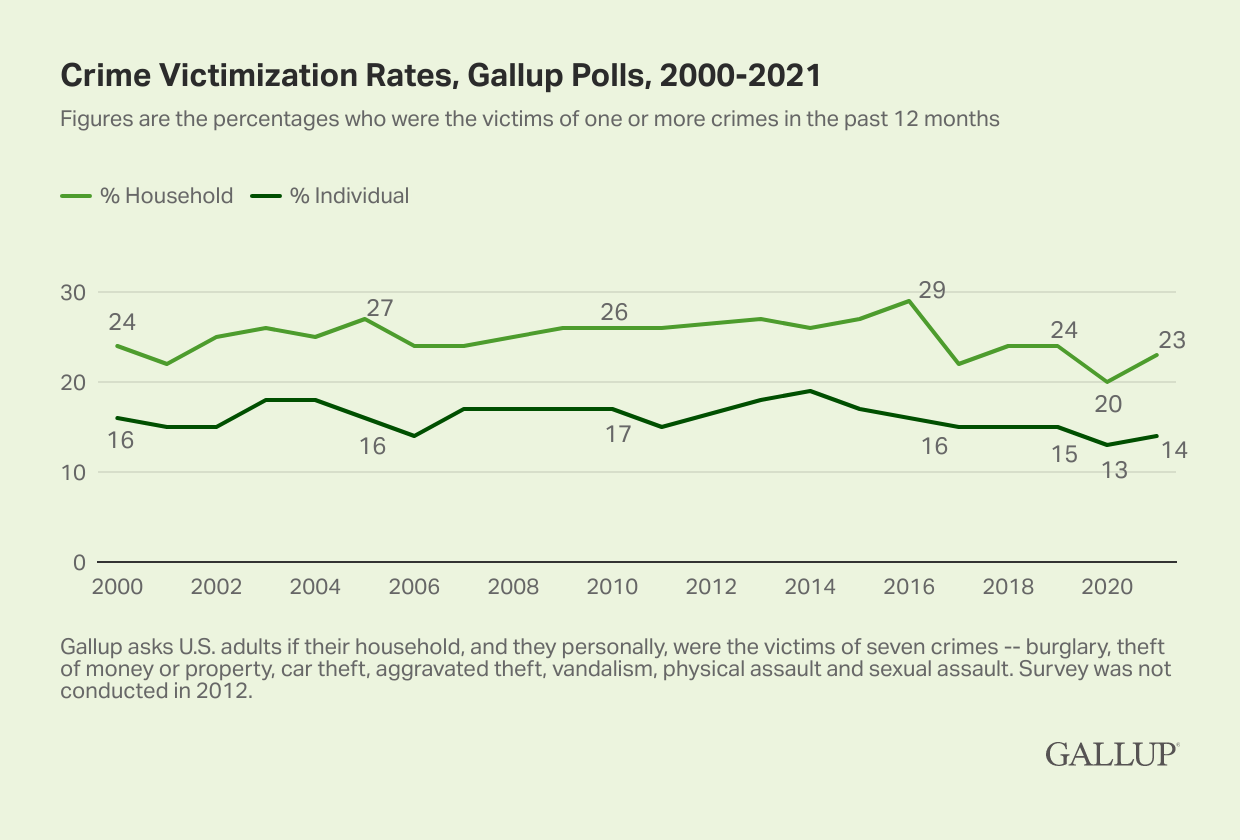 Gallup's annual Crime survey, conducted Oct. 1-19, asks U.S. adults to say whether they or another member of their household has been the victim of each of seven different crimes. These include burglary, property theft, car theft, vandalism, aggravated robbery, physical assault and sexual assault.

Of these, Americans are most likely to have experienced theft, with 14% saying money or property was stolen from them or another household member in the past year. Vandalism, at 12%, is also one of the more common crimes. Americans are least likely to say a member of their household has been the victim of any of the three violent crimes asked about in the survey, which include physical assault (3%), sexual assault (2%) and aggravated robbery (2%).

The incidence of these crimes has not varied much in recent years, but all crimes are now at least as common, if not more common, than in 2020. The biggest increase observed this year was three percentage points for burglary, with 5% saying their home or apartment was broken into in the past year.

Longer term, fewer Americans today than in the 2009 through 2016 period say they were victimized by property theft and vandalism.

Recent crime reports based on 2020 data collected by the FBI suggest a decline in major crimes between 2019 and 2020, though there was a slight increase in violent crime (including homicides) and a record one-year increase in the homicide rate.

Gallup finds that 5% of U.S. households and 3% of U.S. adults were victimized by at least one of the three violent crimes measured in its Crime survey. Both figures are unchanged over the past three years.

Americans who say they live in a "big" or a "small" city are significantly more likely today than in 2020 to indicate their household was victimized by crime. Thirty percent of city residents, up from 22% in 2020, say a member of their household was the victim of one or more of the seven crimes. The current figure is also higher than in 2019 (26%).

Nineteen percent of both suburban and town or rural residents say their household was victimized by crime in the past 12 months. Both figures are lower than what Gallup measured in 2019, though for rural residents it is slightly higher than in 2020.

Apart from Gallup's crime victimization index that covers traditional crimes, Gallup has in recent years sought to measure Americans' experience with internet crimes on its annual Crime poll. Gallup first asked about identity theft in 2009 and theft of personal or financial information by computer hackers in 2017. Americans are more likely to report being the victim of these computer-based crimes than most of the traditional physical and property crimes.

This year, 17% say someone in their household was the victim of identity theft, tying the 2016 measure as the highest to date. Additionally, 28% say a computer hacker stole personal, credit card or financial information from a member of their household, up significantly from 20% a year ago and also the highest Gallup has measured. 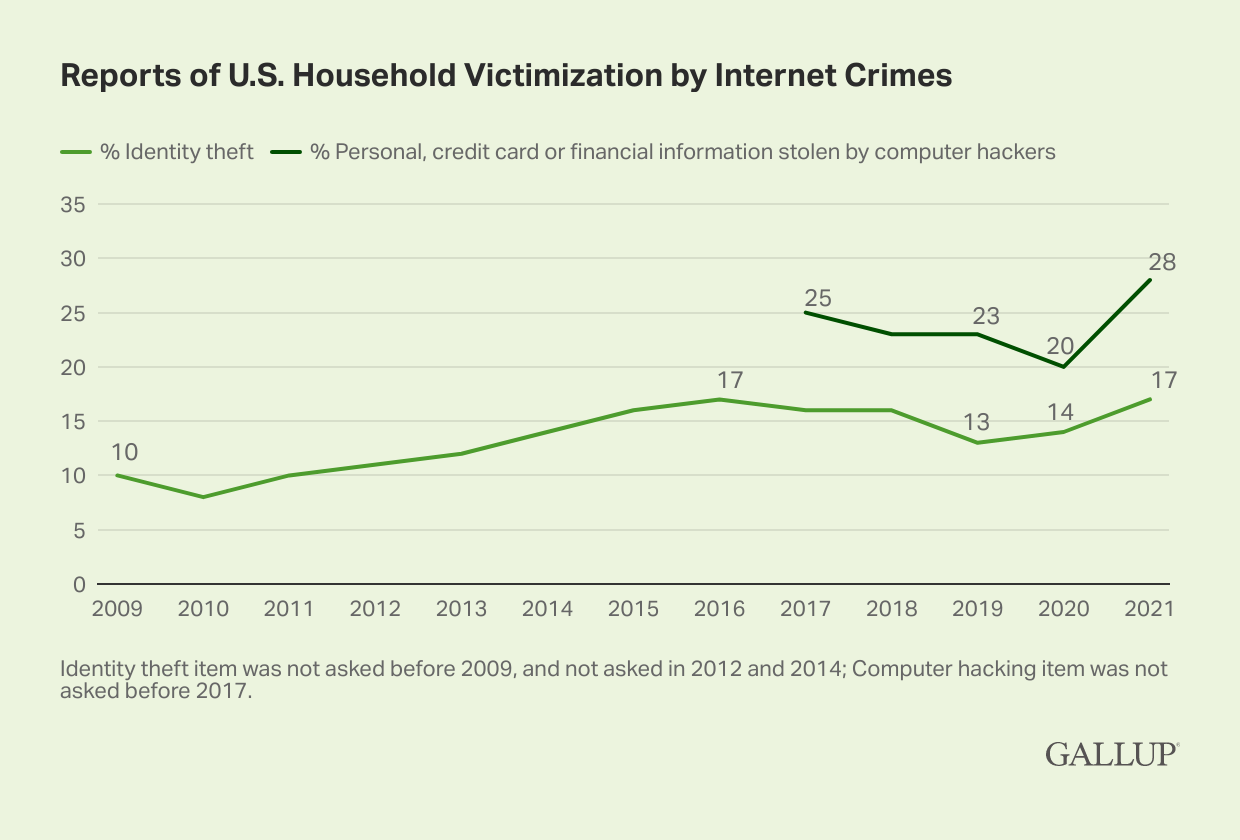 Line graph. Reports of household victimization by identity theft or theft of personal, credit card or financial information by computer hackers. Seventeen percent of U.S. adults say someone in their household has been the victim of identity theft in the past 12 months, tying 2016 as the highest in Gallup's trend since 2009. A new high of 28% of U.S. adults say a computer hacker stole personal, credit card or financial information from a member of their household in the past 12 months. This is up from 20% in 2020 and the highest in Gallup's trend dating back to 2017.

Crime has been a key issue this year with the FBI documenting a record increase in the murder rate between 2019 and 2020. Gallup's broader measure of crime remains lower than it has been in past years, but not as low as the 2020 measurement. Perceptions of a worsening crime situation may be a factor in the recent decline in President Joe Biden's job approval rating and in Americans' continuing low level of satisfaction with the way things are going in the United States.