WASHINGTON, D.C. -- President Joe Biden's job approval remains entrenched in the low 40s, having registered 42% or 43% in four separate Gallup polls since September, including 43% in a new December survey. 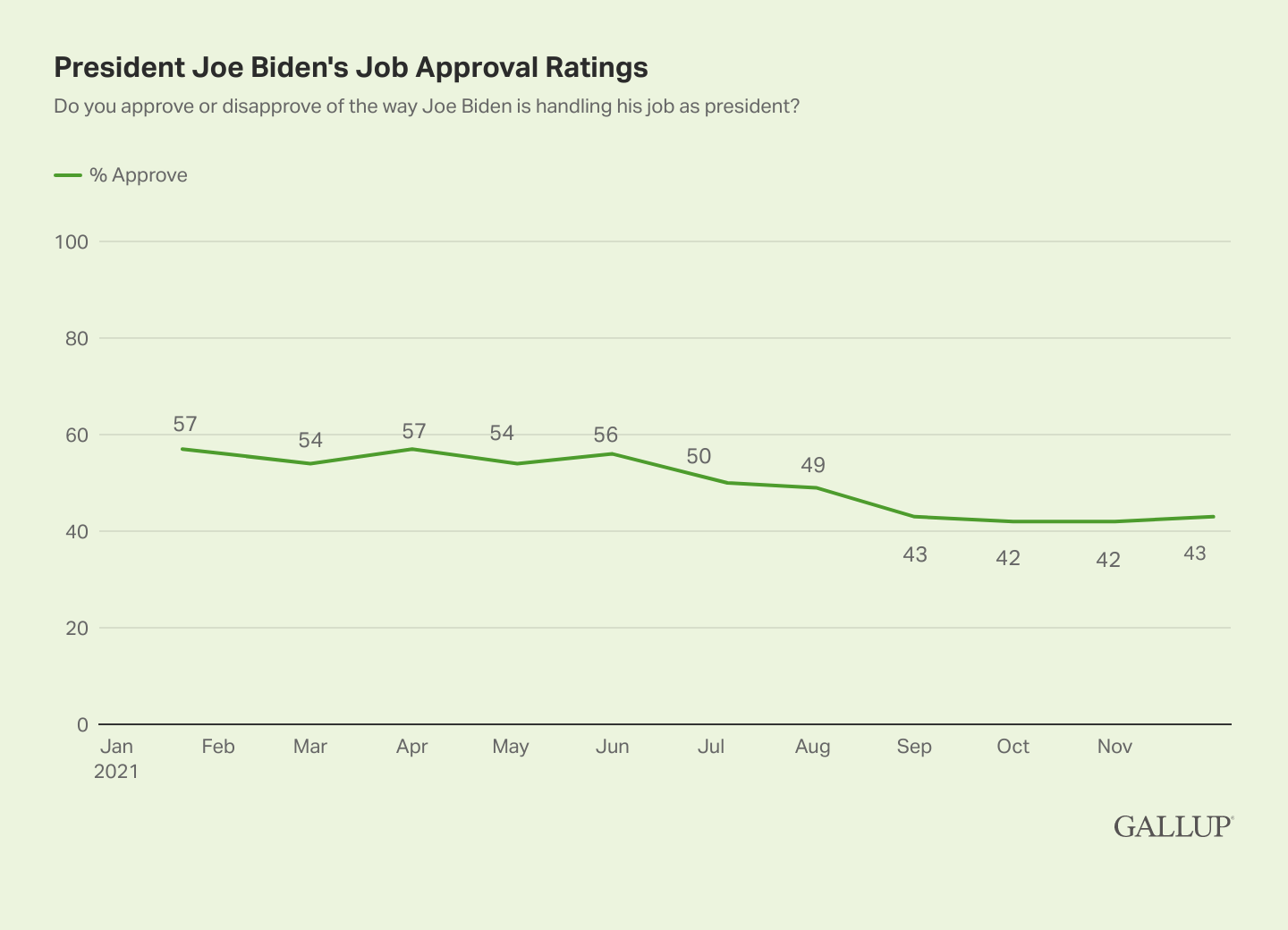 Line graph. Trend in President Joe Biden's job approval rating. In December 2021, 43% of U.S. adults approve of the job Biden is doing as president, similar to the past three months but lower than in readings taken in January through August.

Biden began his term with relatively strong approval in the high 50s and stayed above the 50% mark through June. In July, when U.S. coronavirus cases surged, his approval fell to 50% and stayed at about that level in August. Then, after the U.S. withdrawal from Afghanistan, it dropped to the low 40s, where it has remained since.

The new Dec. 1-16 poll was conducted as the U.S. was facing a renewed increase in coronavirus infections of both the delta and omicron variants of the virus. Inflation in the U.S. has reached levels not seen in decades, likely overshadowing positive economic indicators such as declining unemployment, solid economic growth and historically high stock values.

Though Biden's overall approval number is steady, his ratings by political subgroup have shown some movement, most notably among Democrats. Their 78% approval is significantly lower than in prior Gallup surveys, when it registered 90% or higher. It is unclear at this point if the current reading among Democrats represents an actual decline in approval among his party base or a one-time statistical outlier. Some other polls have recently shown declining Biden approval among Democrats.

While the current Gallup survey measured lower-than-usual Biden job approval among Democrats, his rating from independents, 40%, is slightly higher than it has been. In the September to November surveys, between 34% and 37% of independents approved of the way Biden was handling his job.

The president's 5% approval among Republicans is similar to recent measures among this group.

As is typically the case, Congress has a lower job approval rating -- 23% -- than the president does. In the past three months, Congress' approval rating has slumped after being in the mid-20s to mid-30s earlier this year. This included a 36% reading in March, which was the highest Gallup has measured for the institution since 2009. 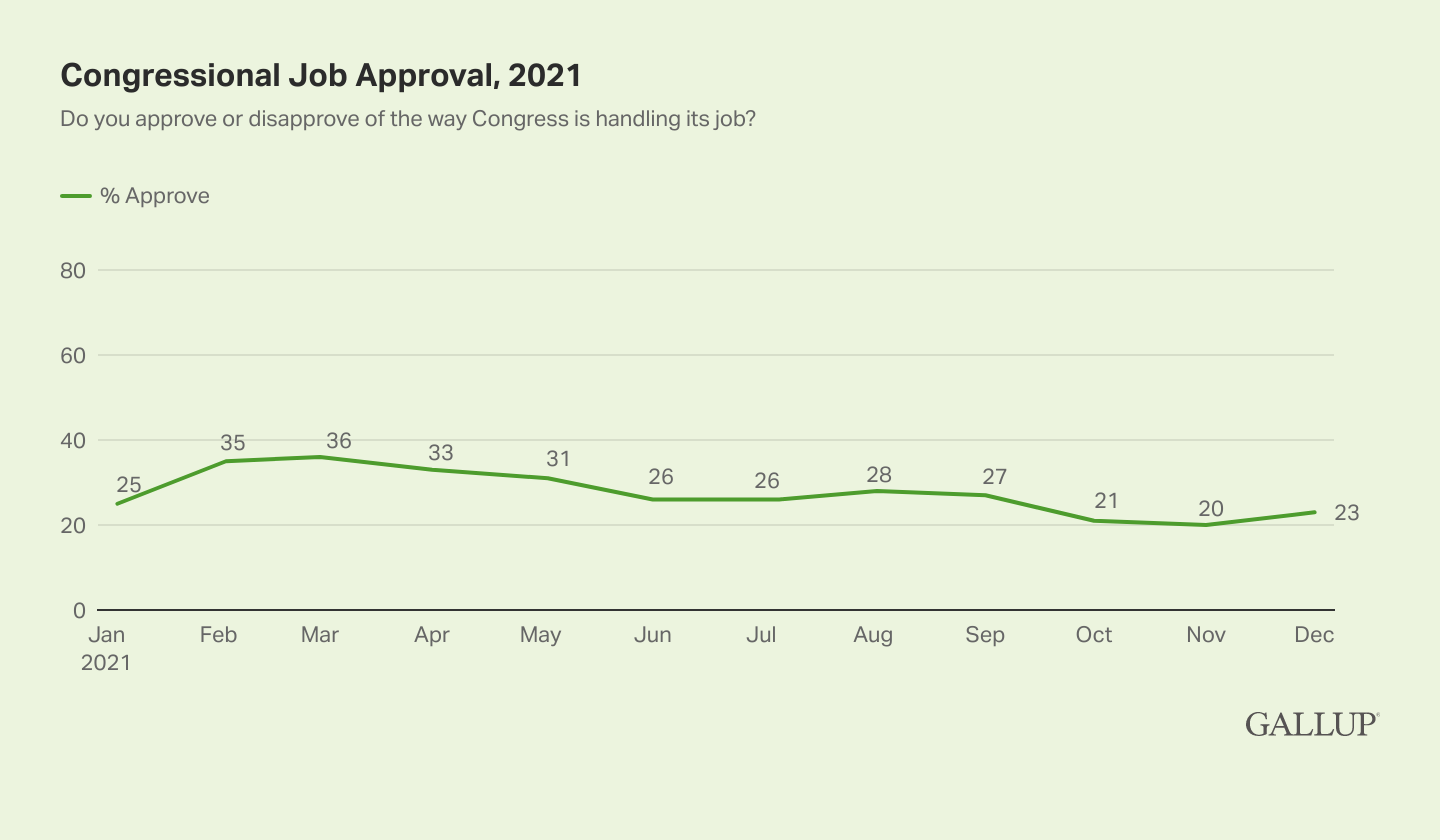 Line graph. Job approval of Congress in 2021. From February through May 2021, more than 30% of Americans approved of the job Congress was doing. Between June and September, approval was slightly lower, ranging between 26% and 28%. Since October, approval has dipped to between 20% and 23%.

The retreat in congressional approval ratings is being led by Democrats. Earlier this year, as many as 61% of Democrats approved of Congress, including 55% in September. During the past three months, Congress' approval among Democrats has been in the 30% range, including 36% this month.

Though Congress last month passed the bipartisan infrastructure bill after lengthy negotiations in the House, the "Build Back Better" legislation that focuses on climate change and social spending programs has stalled in the Senate after the House passed a version of the bill in November. Passage of that latter bill appears to be in jeopardy, with Sen. Joe Manchin, the swing vote in the Senate, announcing this week that he would not vote for it.

Twenty-two percent of independents and 7% of Republicans currently approve of the way Congress is handling its job.

After Americans were generally positive about Biden's performance at the start of his presidency, they have been much more critical since September. His approval ratings in the low 40s are similar to those registered by former Presidents Donald Trump and Barack Obama for long stretches of their presidencies. The three most recent presidents have governed in an era of heightened partisanship, in which supporters of the opposition party are loath to express positive opinions of the Oval Office occupant, making it difficult for these presidents to register high overall approval ratings. Much of the movement that does occur in job ratings occurs among political independents. The group can be hard to win back once things go in a negative direction, as occurred for Biden in the late summer and early fall.

Results for this Gallup poll are based on telephone interviews conducted Dec. 1-16, 2021, with a random sample of 811 adults, aged 18 and older, living in all 50 U.S. states and the District of Columbia. For results based on the total sample of national adults, the margin of sampling error is ±4 percentage points at the 95% confidence level.

For results based on the total sample of 223 Democrats, the margin of sampling error is ±8 percentage points at the 95% confidence level.

For results based on the total sample of 311 independents, the margin of sampling error is ±7 percentage points at the 95% confidence level.

For results based on the total sample of 259 Republicans, the margin of sampling error is ±7 percentage points at the 95% confidence level.