WASHINGTON, D.C. -- Americans' concern about the economy, as measured by the percentage who mention any economic issue as the most important problem facing the U.S., has reached a high point during the pandemic. Twenty-six percent of Americans now cite an economic concern -- such as inflation, unemployment or the economy in general -- as the top problem.

While at a high point for the pandemic, the percentage raising economic concerns as the nation's most important problem remains relatively low in Gallup's historical trend dating back to 1991. The high point was 86% in February 2009, during the Great Recession and financial crisis. Even in relatively good economic times in the past, it was common for more than 30% of Americans to name an economic issue. 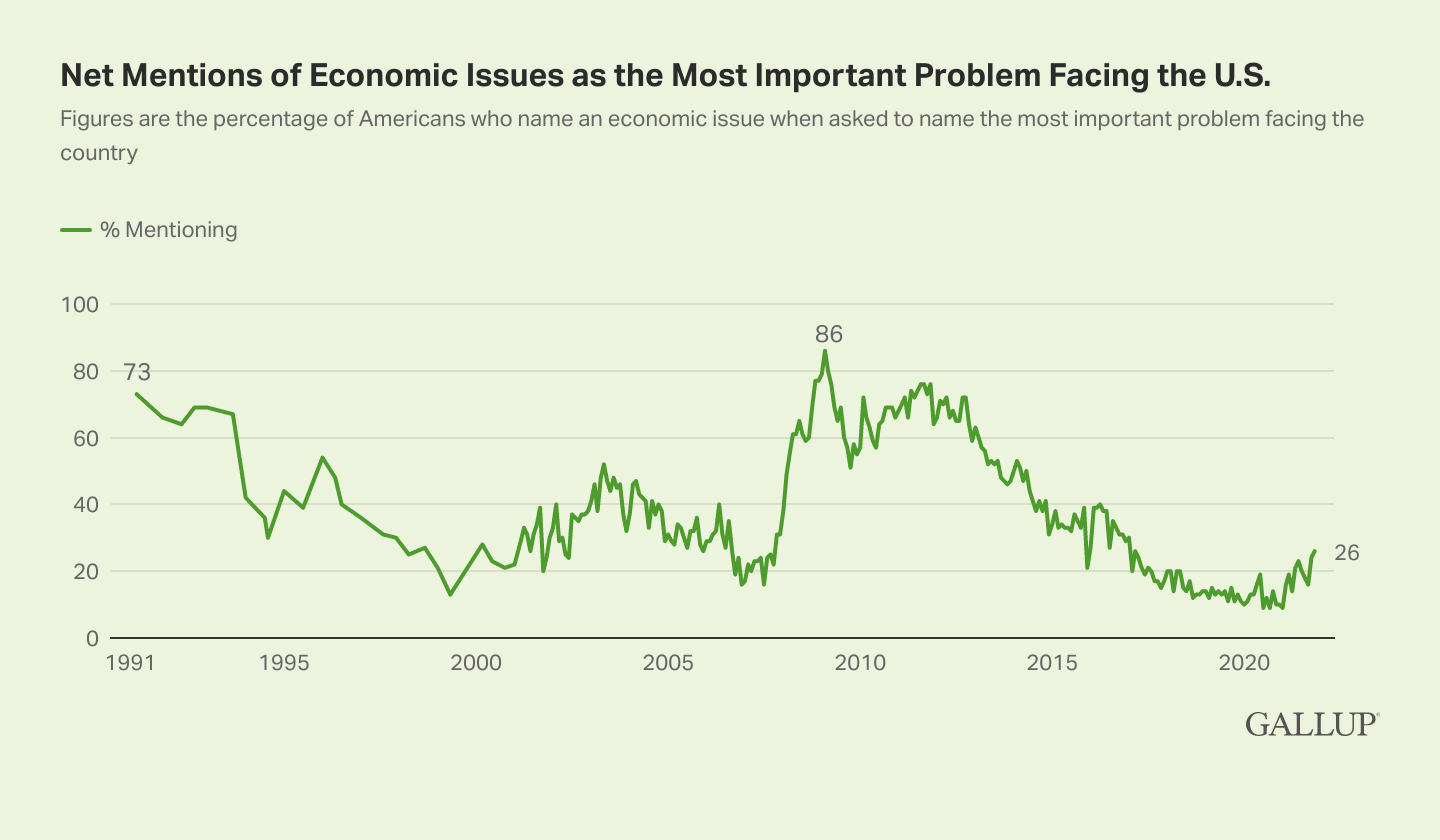 The Nov. 1-16 poll finds that Republicans (30%) and independents (29%) are about equally likely to raise an economic concern when asked to name the most important problem, while Democrats are less likely to do so (18%).

The most frequently mentioned specific economic issues are the economy in general terms (10%), inflation (7%) and unemployment (5%). No other economic matters, such as the federal budget deficit, income inequality, or fuel or oil prices, exceed 1%.

In recent months, the percentage naming the economy in general terms and inflation, specifically, have crept up.

It has been more than 20 years (April 2001) since inflation was named as the most important problem by at least 7% of Americans. The last time mentions of inflation were significantly higher than now was in May 1985 when it registered 11%.

Republicans (11%) and independents (7%) are far more likely than Democrats (1%) to say inflation is the most important problem facing the country. There are smaller but still meaningful partisan differences in mentions of the economy in general as the top problem -- 13% of Republicans, 10% of independents and 7% of Democrats give this response.

Government Most Often Mentioned as the Top Problem

Neither inflation nor the economy in general is the most frequently mentioned issue overall. In fact, more than twice as many Americans name the government (21%) as the top problem than name either of those two economic issues. More Americans also mention the coronavirus (13%) than the two top economic issues.

Concerns about the coronavirus have eased in recent months, with the percentage down from 26% in August during the summer surge in COVID-19 cases. In the early stages of the pandemic, in April 2020, 45% named the coronavirus as the top problem.

Other specific issues commonly mentioned as the most important problem in the new survey are immigration (9%), unifying the country (6%) and race relations or racism (5%).

Gallup's Economic Confidence Index, which measures Americans' assessments of current U.S. economic conditions and whether the economy is getting better or worse, is -29 in November. The current reading is similar to October's -25 score, as well as the -33 registered in April 2020, the worst so far during the pandemic. Economic confidence has improved at various points in the pandemic, but has not been able to sustain the improvement for long. 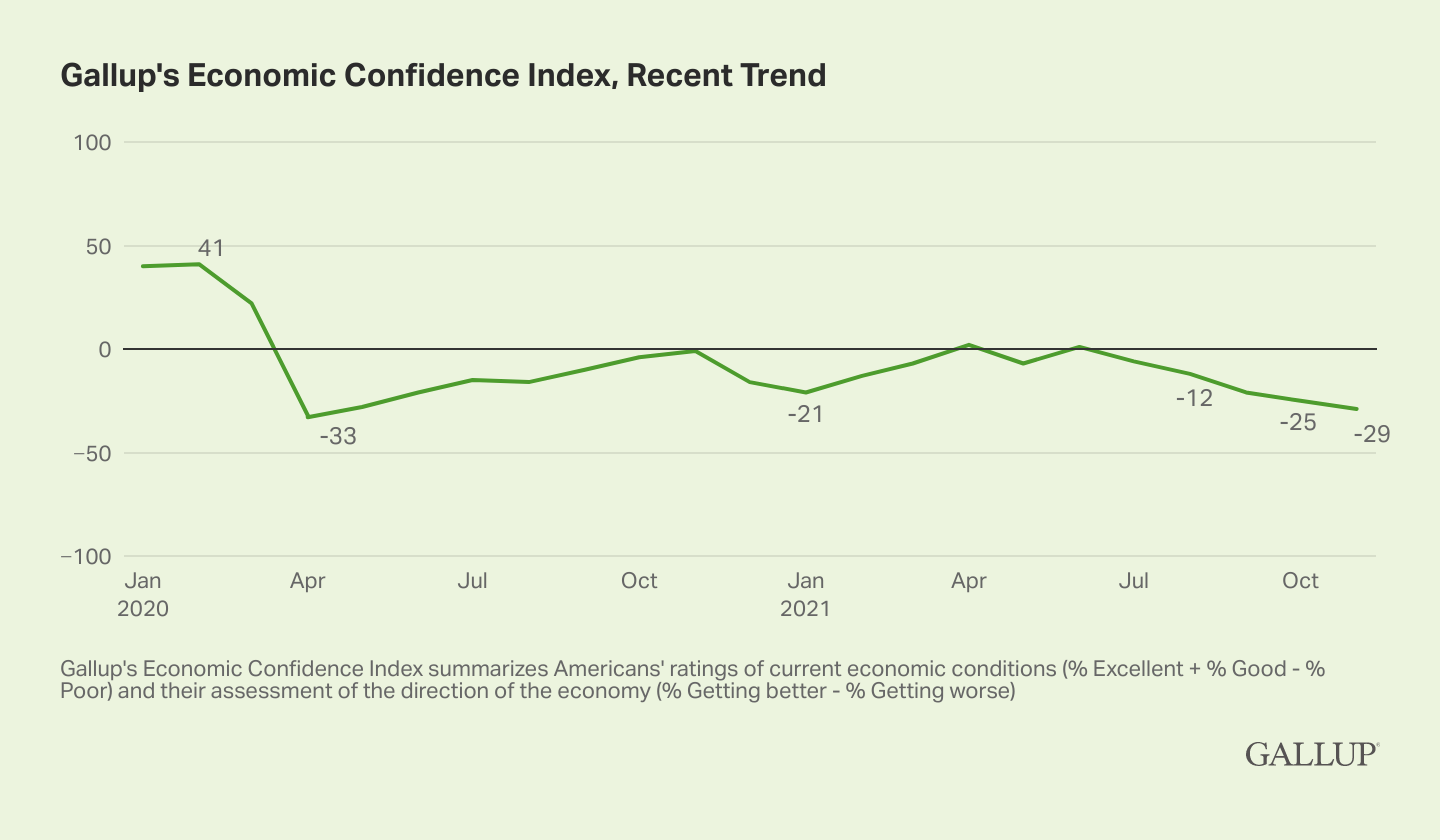 Line graph. Gallup's Economic Confidence Recent Trend. The index fell from +41 before the pandemic to -33 after it first began. Confidence began to improve reaching -1 in November 2020 before falling back in December and January. Confidence once again increased between February and June 2021 but has declined since then, currently sitting at -29, the lowest since the -33 reading in April 2020.

The current pessimism largely stems from Americans' belief that the economy is getting worse (70%) rather than better (26%). As recently as June, Americans were divided in their economic outlook. 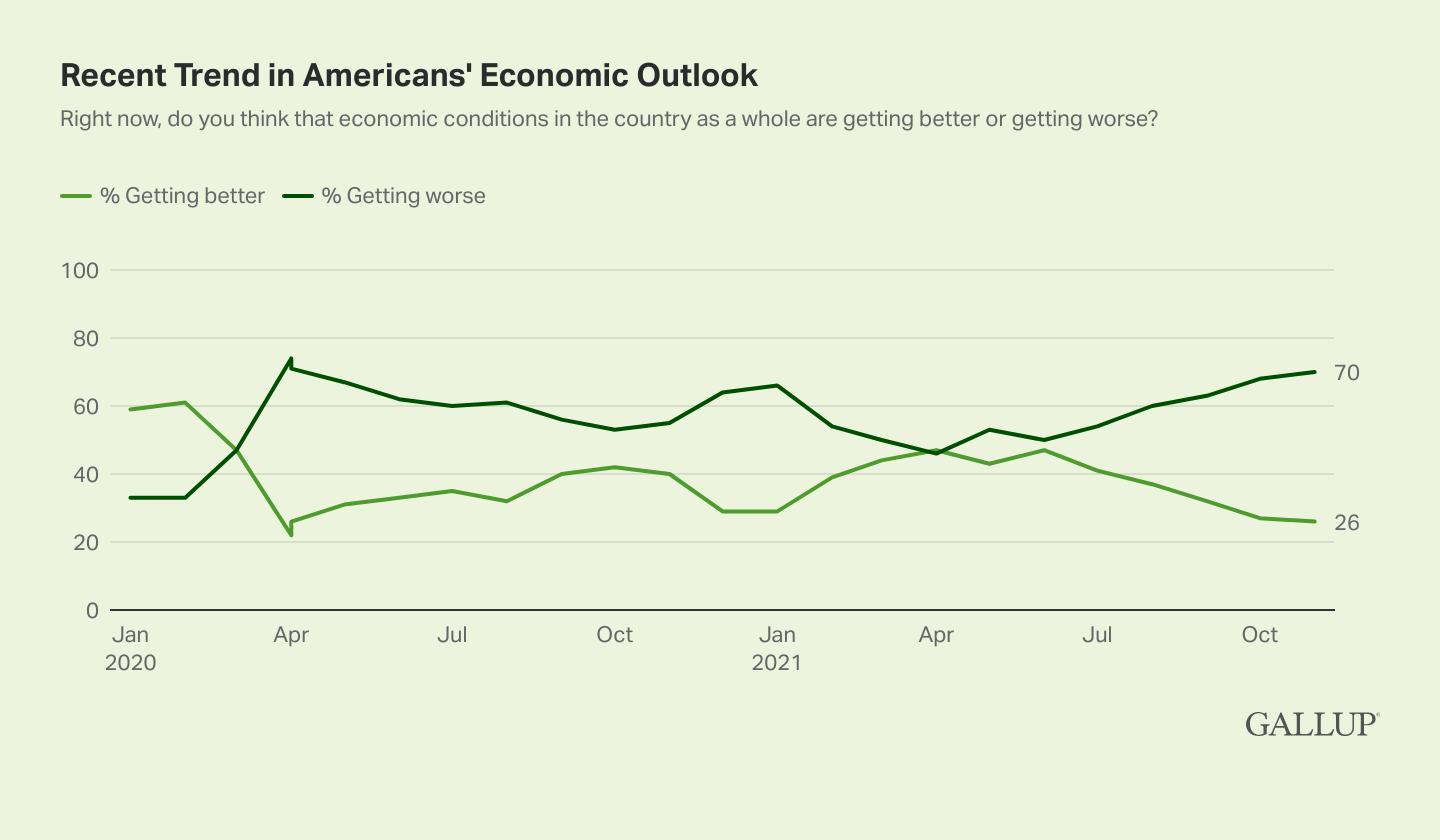 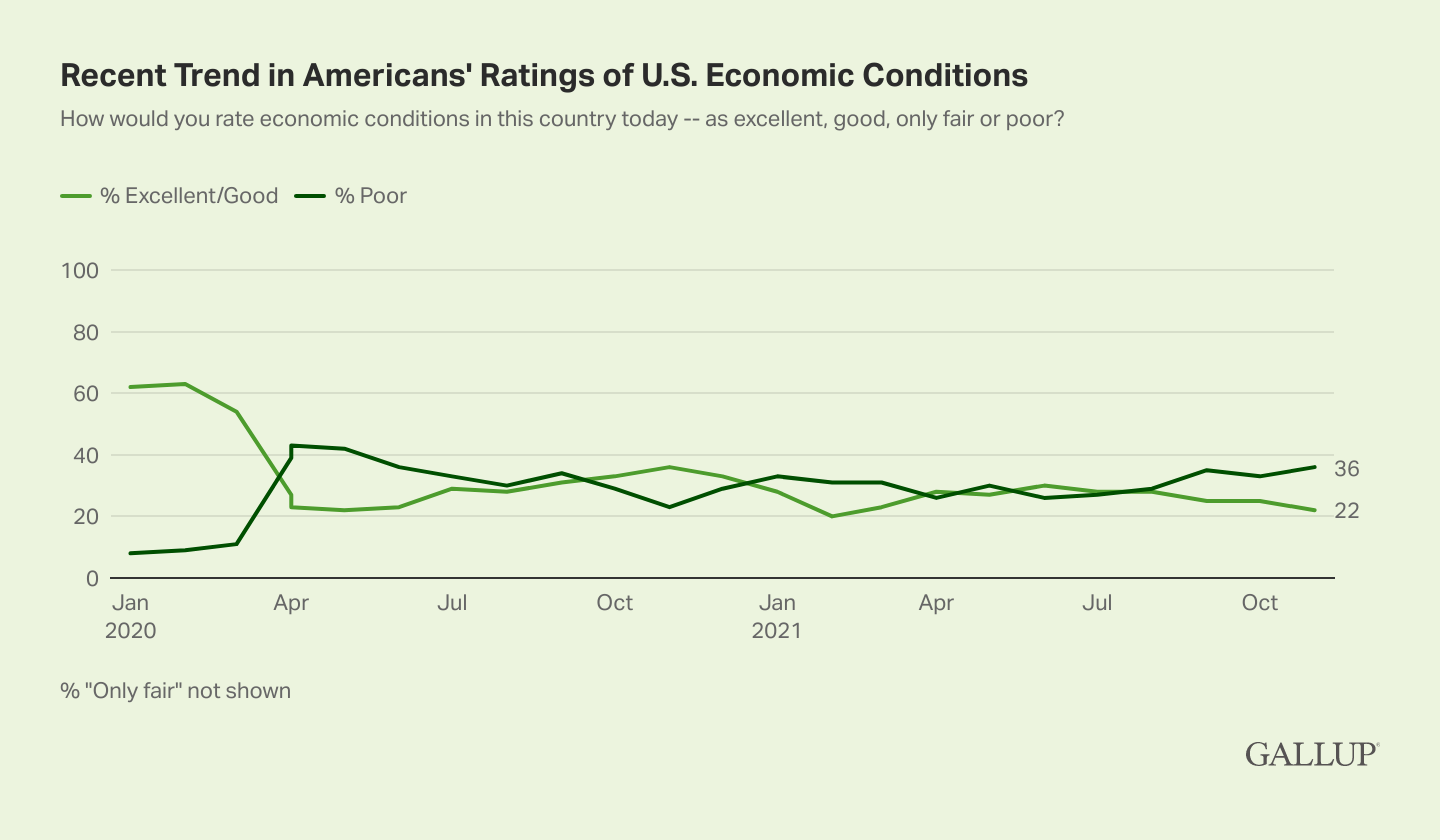 Line graph. Recent Trend in Americans' Rating of Current Economic Conditions in the U.S. In November 2021 22% of U.S. adults rate current economic conditions as excellent or good while 36% rate them as poor. Before the pandemic began, many more rated them positively than negatively. Since the pandemic began, about as many Americans rated current economic conditions positively as negatively, except for in the first few months of the pandemic, between April and June 2020, and since September of 2021.

The economic recovery from the brief recession last year tied to COVID-19 has been uneven. Economic growth, as measured by gross domestic product, slowed in the third quarter after posting a strong second quarter. The latest unemployment report showed robust job growth after a couple of sluggish months. However, sharply rising inflation and labor and supply shortages are holding back economic activity. When Americans net it all out, they evaluate the economy more negatively than positively.

Increasingly, the public views the economy as the nation's top problem, though they are far less likely to see it that way than at times in the past. Americans also give President Joe Biden relatively poor marks for handling the economy, and his overall approval rating is only marginally better.

The fact that Americans rate the economy negatively overall suggests that the weaker aspects of it -- inflation and shortages -- are weighing more heavily in their evaluations than the positive aspects are. As such, Biden's ability to improve his economic and overall job approval ratings appear to be tied to his ability to address inflation and shortages, if the stronger parts of the economy can remain that way.