WASHINGTON, D.C. -- Gallup's initial measure of Americans' 2021 Christmas spending intentions finds consumers planning to spend an average $837 on gifts this season. That is statistically similar to the $805 they estimated spending for the 2020 holiday season at the same time a year ago. Both pandemic-era estimates are lower than what Gallup found in the preceding few years, including the record-high $942 recorded in 2019. 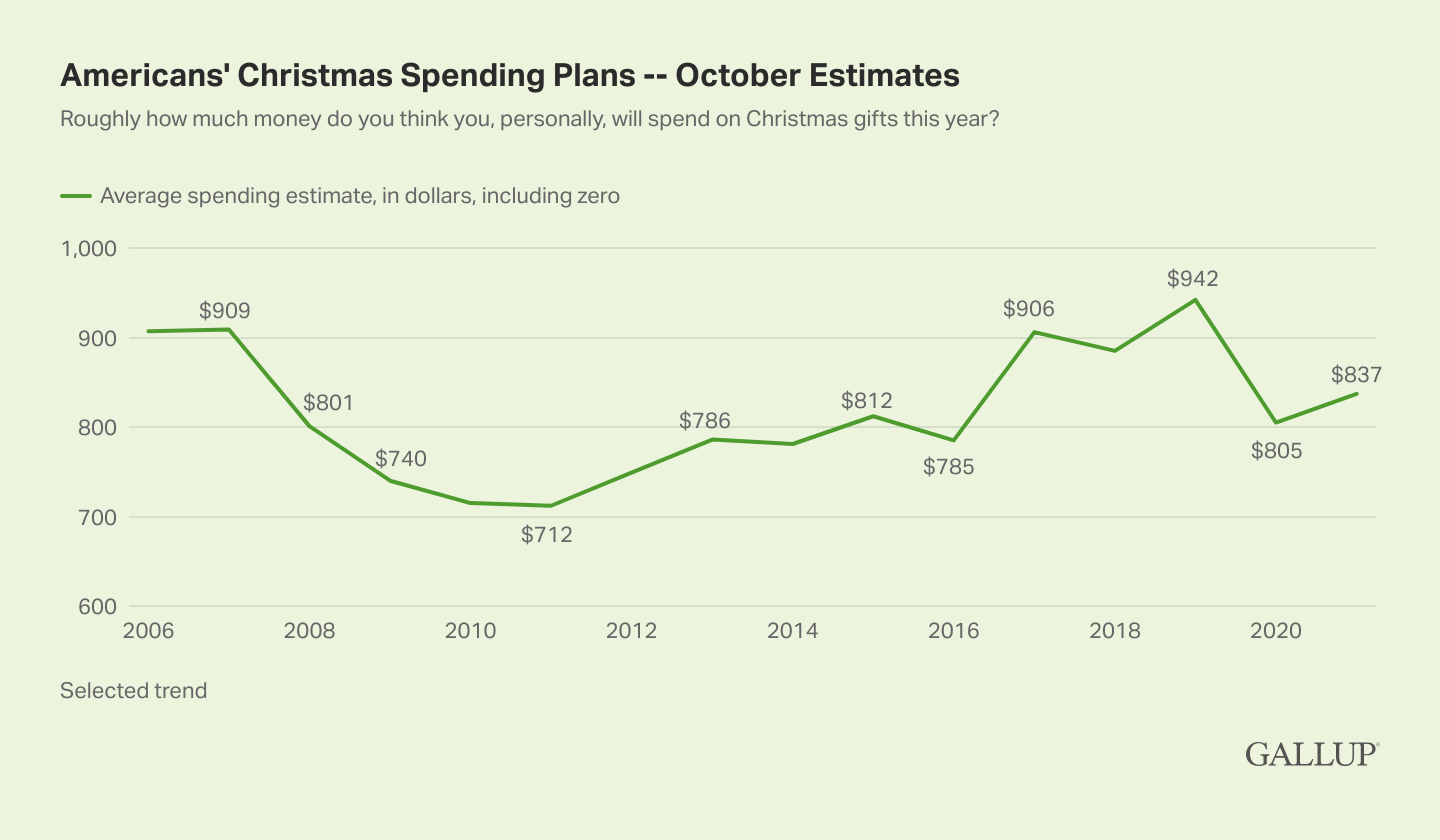 Gallup first asked Americans about their Christmas spending intentions in October 1989 and has measured it every October and November except one (2012, measured only in November) since 2006. The October readings provide an initial look at consumers' holiday spending mindset, indicating the likely strength of that year's holiday retail sales. Gallup's follow-up measure in November captures any changes that may occur in consumers' estimates as their spending is further along.

Holiday sales typically increase year-over-year, rising 3.4% on average since 2000, according to figures compiled by the National Retail Federation, with sales up 5% or more in strong years and around 2% in weak years. Since 2000, the change in holiday sales has been worse than that only twice -- in 2008 and in 2009, when the economy was dealing with the effects of the global financial crisis and 2007-2009 recession.

Based on Gallup modeling, the relative steadiness in Americans' estimate this year compared with October 2020 suggests that the 2021 increase in holiday sales will be about average.

Most Consumers Also Expect Their Spending Will Be Steady 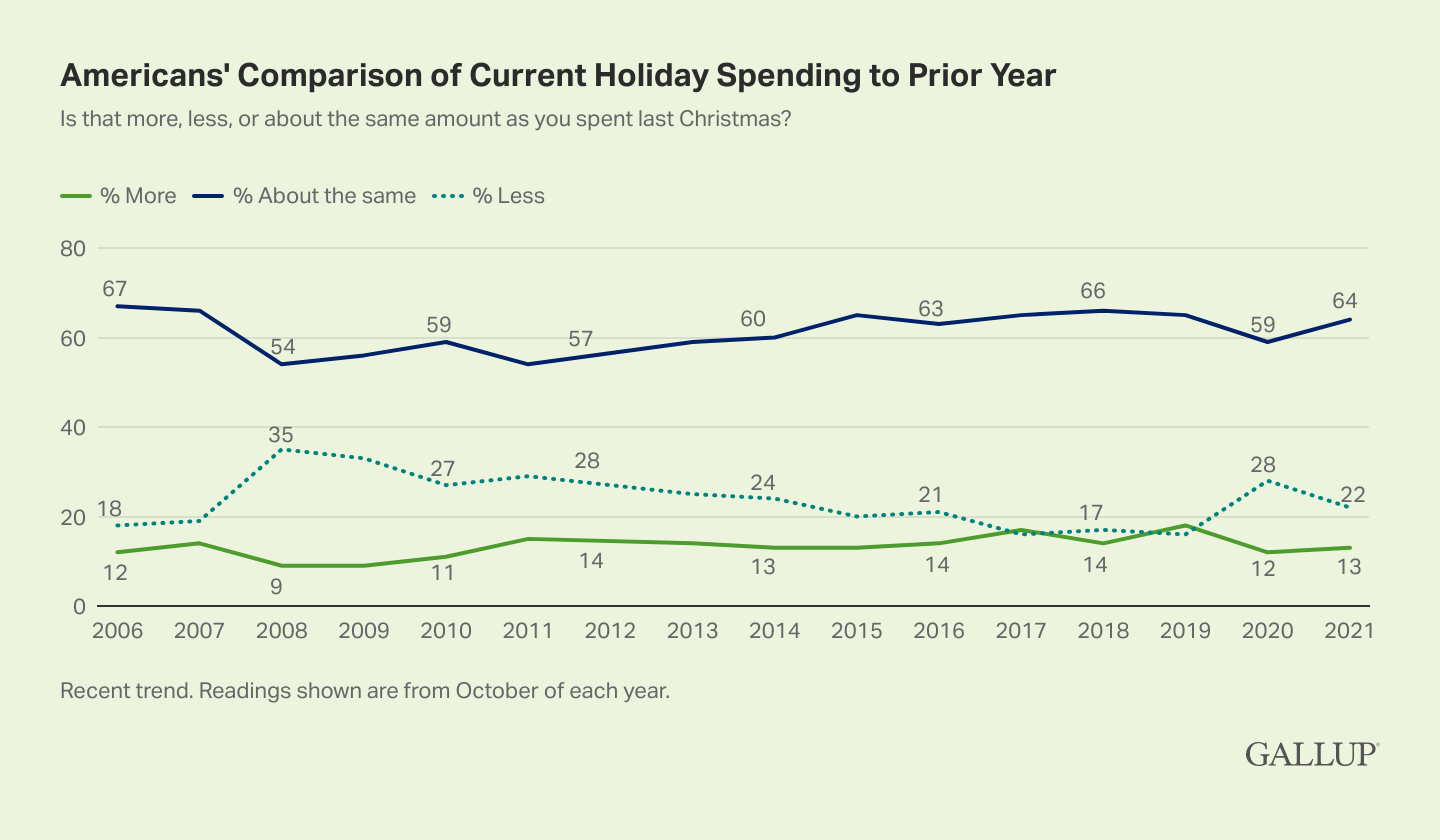 Today's nine-percentage-point gap between those planning to spend less rather than more is about average for the trend.

Gallup's measure asking Americans to estimate their total spending on Christmas gifts has been a good harbinger of holiday retail sales in most years. While that is particularly true for the November estimate, the October measure sets the baseline for where things are headed. For now, it appears consumers are gearing up to spend enough to give retailers an average, if not great, holiday season.

Caution is always warranted in interpreting the October figures, as Americans' spending intentions can change as the season progresses. Changes in national economic metrics like the stock market and unemployment reports can affect consumers' psychology, as can policy actions out of Washington and, more recently, of course, the pandemic.

This year, passage of President Joe Biden's infrastructure and spending bills in Congress, should that occur, could alter -- negatively or positively -- how consumers feel about their pocketbook come November. And inflation is a bit of a wild card. If consumers start to feel more stretched because of increases in gas prices and the cost of other basic goods, that could dampen their holiday spending. On the other hand, if they decide to proceed with buying gifts for everyone on their list, they may wind up spending significantly more than they initially expected.

Gallup will release its second and final holiday spending forecast in mid-November.

Results for this Gallup poll are based on telephone interviews conducted Oct. 1-19, 2021, with a random sample of 823 adults, aged 18 and older, living in all 50 U.S. states and the District of Columbia. For results based on the total sample of national adults, the margin of sampling error is ±4 percentage points at the 95% confidence level. The margin of error for the spending estimate is ±$69 U.S. All reported margins of sampling error include computed design effects for weighting.

U.S. employees worked remotely as much in September as they did over the summer. Nearly all want to continue that way, and their employers mostly seem amenable.