WASHINGTON, D.C. -- Eighty-one percent of Americans say they donated money to a religious or other charitable organization in the past year, and 56% volunteered time to such an organization. After dipping in April 2020 during the early stages of the pandemic, charitable donations have rebounded and are essentially back to the level measured in 2013 and 2017 surveys.

Volunteer activity also dropped in 2020 but, in contrast to charitable giving, remains lower than it was in pre-pandemic surveys. While lower today than in recent years, the rate of volunteering has been at its current level in the past, most notably during the Great Recession. 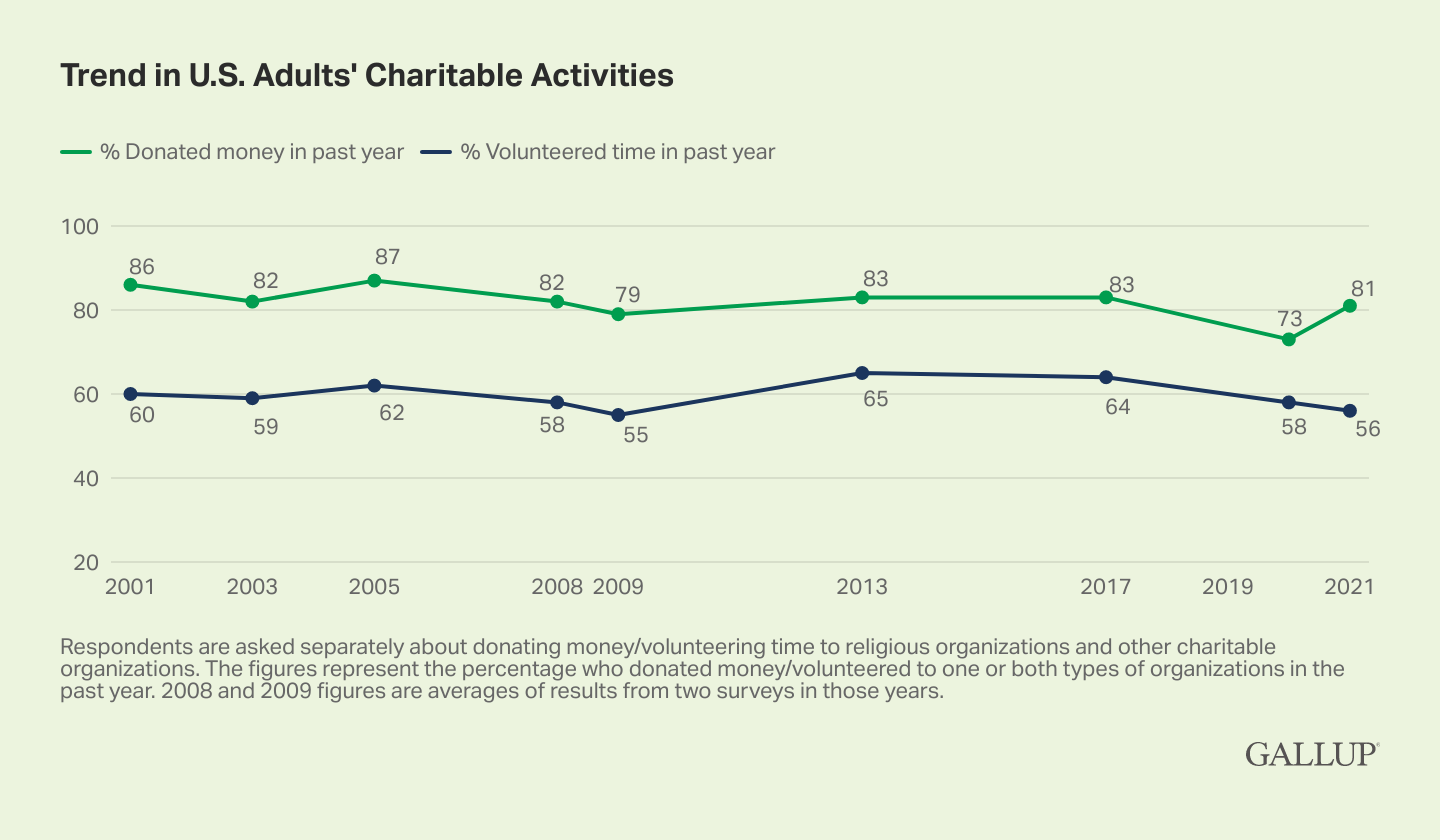 The decline in donations was seen among all income groups in 2020, but more so among those in lower- and middle-income households. Charitable donations are back up among those in all income brackets, with upper-income Americans now returning to pre-pandemic rates. Giving rates among lower- and middle-income Americans are only slightly below where they were in 2017.

Gallup has asked about charitable activities periodically since 2001, usually in December surveys, including the most recent Dec. 1-16 poll. Each respondent is asked about their donations and volunteering for religious organizations, and separately, for any other charitable cause or organization.

No Recovery in Donating to Religious Organizations

With respect to donations, the bounce back from 2020 appears to be confined mostly to secular giving. Forty-four percent of Americans say they gave money to religious organizations in the past year, unchanged from 2020, which was the lowest in Gallup's trend by a significant margin. 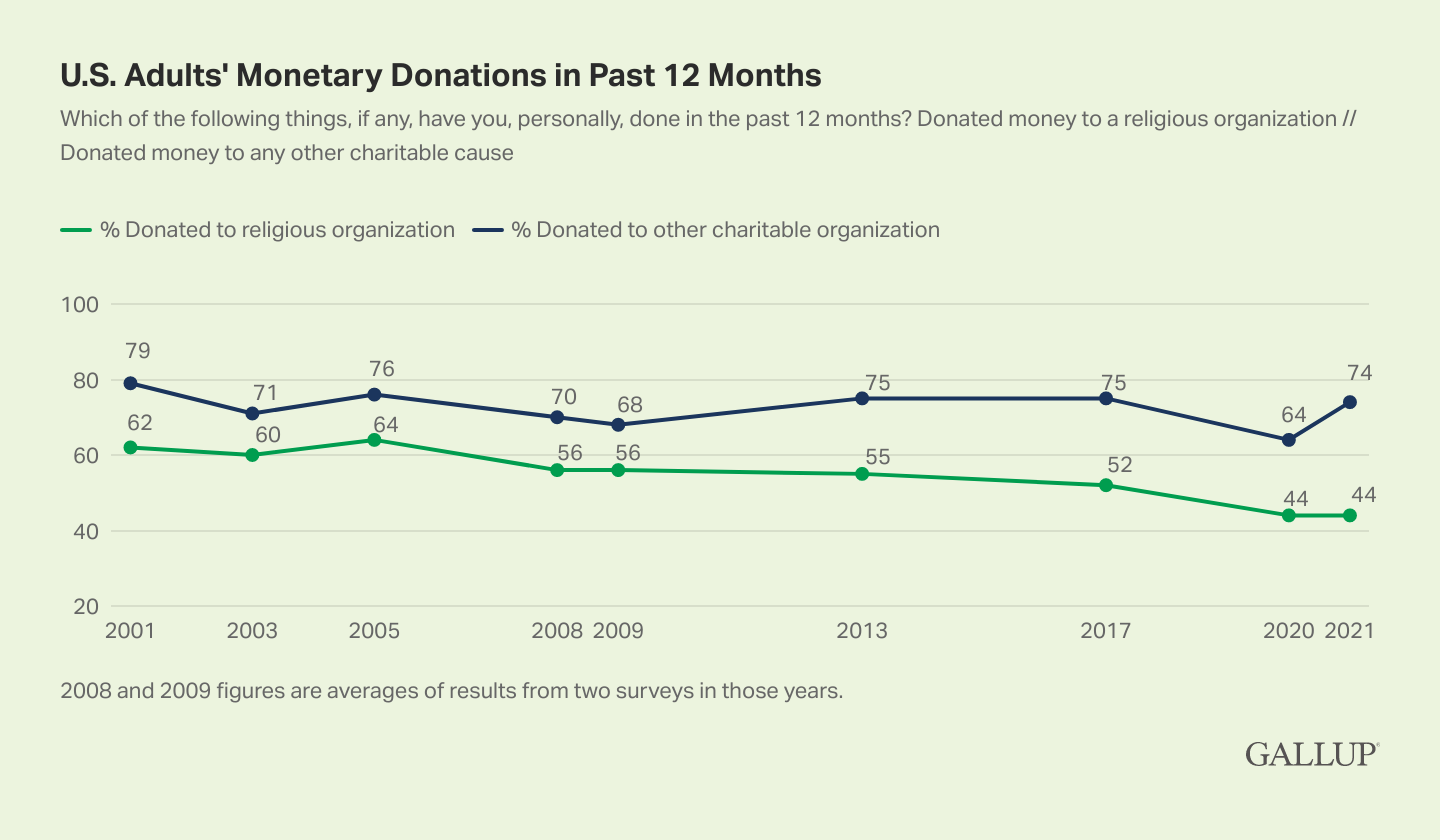 Volunteering is not yet back to pre-pandemic levels for either religious organizations or other charities. Thirty-five percent of Americans report volunteering for a religious organization in the past year, down slightly from 38% in 2020 and well below the 44% from 2017. The current figure is the lowest in Gallup's trend, although not meaningfully different from 37% readings in 2008 and 2009.

Forty-seven percent of Americans say they volunteered their time for a secular charity in the past year. That is slightly higher than the 43% measured in 2020 but still down from 50% in 2017. 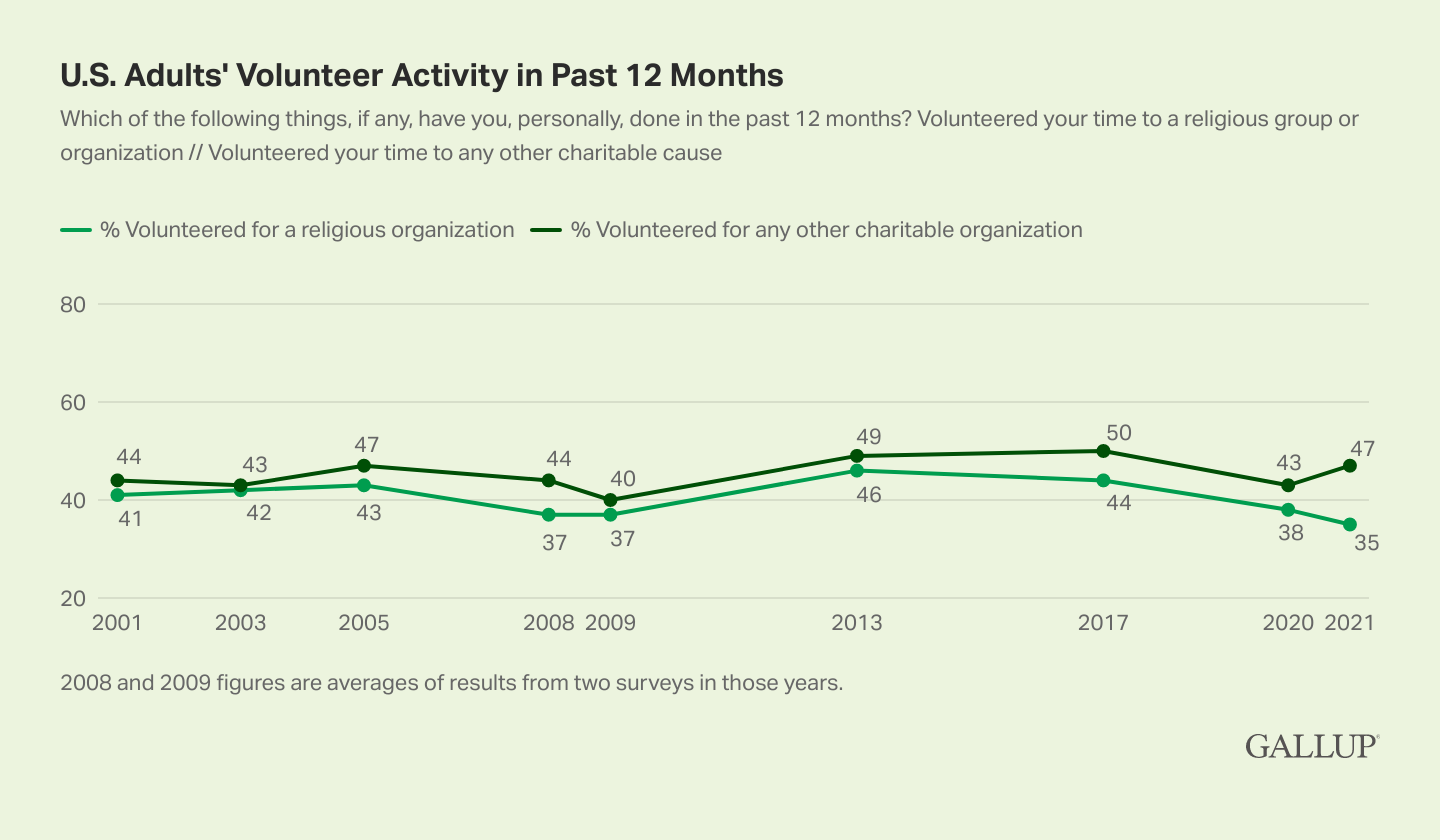 Amid economic uncertainty and restrictions on public activity in the initial stages of the pandemic, Americans' charitable activity declined. More than a year later, monetary charitable donations are mostly back to their pre-pandemic levels, while volunteerism still lags.

The increase in donations is consistent with Americans' intentions in the 2020 Gallup survey when more U.S. adults said they planned to increase (25%) rather than decrease (7%) the amount of money they gave to charity in the coming year. Two-thirds planned to maintain their level of giving.

Donating may have been aided by the growth in income for Americans in 2020 and 2021, from government payments designed to boost the economy and savings from reductions in spending on travel, entertainment and other public activities.

A recovery in volunteering may be more elusive as concerns about COVID-19 exposure and public health safety measures limit Americans' willingness and ability to perform volunteer work. While there was hope earlier in 2021 that COVID-19 vaccines would allow Americans to return to their normal activities, the unpredictable nature of the virus and emergence of new variants has forced leaders and citizens to reconsider when -- or if -- the pandemic will end.