skip to main content
The Short Answer
How Religious Are Americans?

WASHINGTON, D.C. -- The vast majority of Americans have a religious preference -- predominantly a Christian one -- though that percentage is declining. At the same time, much smaller proportions of Americans say that religion is "very important" to them, that they belong to a church or that they regularly attend religious services.

Most Americans Identify With a Religion

Seven percent identify with a non-Christian religion, including 2% who are Jewish, 1% Muslim and 1% Buddhist, among others.

Twenty-one percent of Americans said they have no religious preference, and 3% did not answer the question. 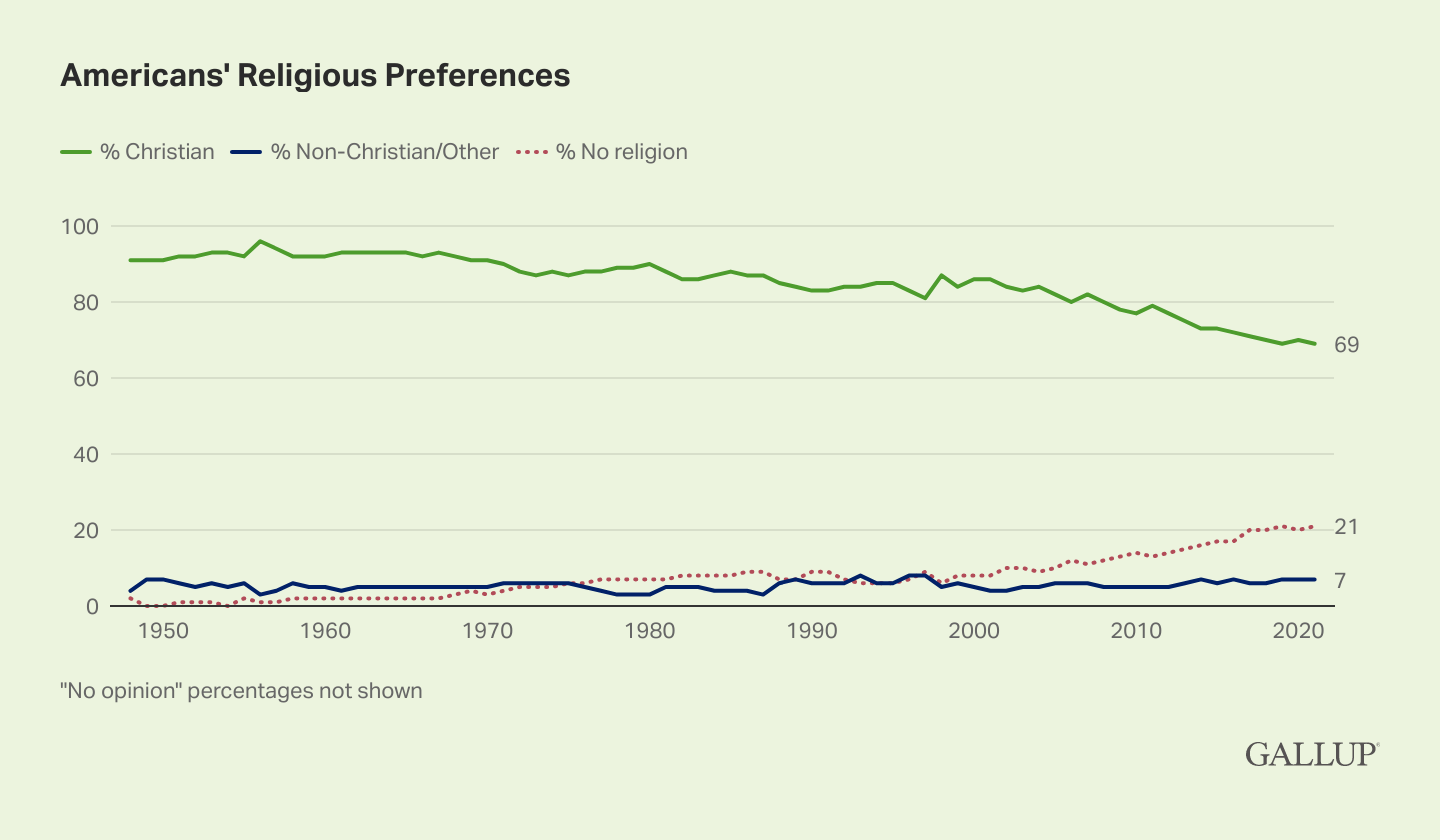 Fifty years ago, in 1971, 90% of U.S. adults identified with a Christian religion, 6% were non-Christian or another religion, and 4% did not have a religious preference. Thus, much of the change in the U.S. has been a shift away from Christian religions to no religion at all.

Religion 'Very Important' to About Half of Americans 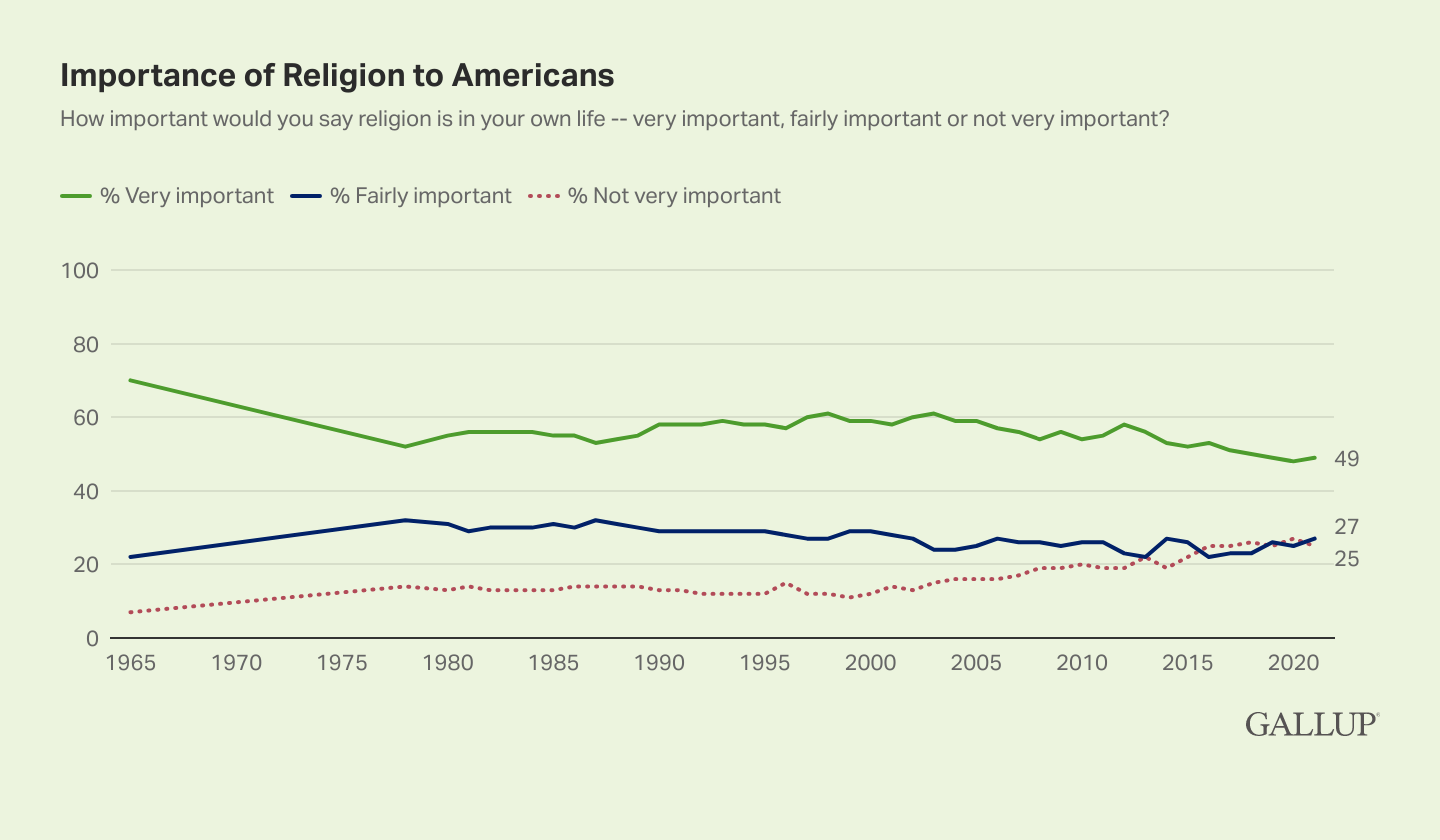 Even though most Americans have a religious preference and say religion is at least fairly important to them, much smaller proportions regularly attend religious services. 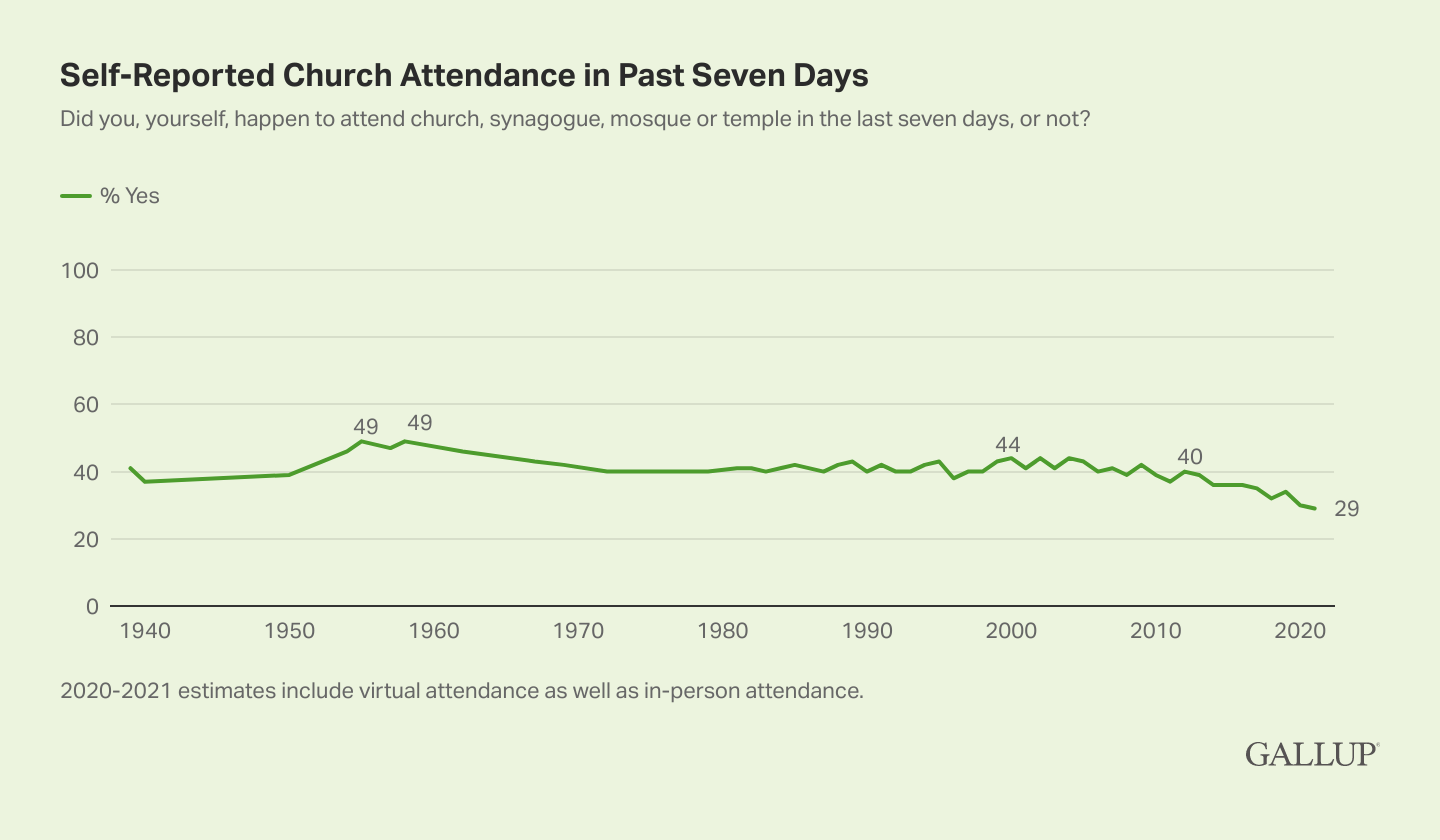 Line graph. Self-reported church attendance in past seven days, 1939 through 2021. At its peak in the mid-to-late 1950s, 49% of U.S. adults said they had attended church in the past seven days. The percentage generally stayed above 40% until 2012, and has been below that level since, including a new low of 29% in 2021. The 2021 question, which asks about attending church, synagogue, mosque or temple, also accounts for virtual attendance as well as in-person attendance.

The long-term decline in church attendance is linked to a drop in religious identification in general -- particularly for Protestant religions -- but also to decreasing weekly attendance among U.S. Catholics.

Gallup trends on this measure of church attendance date back only to 1992, at which time 34% of U.S. adults said they attended church every week.

Additionally, less than half of Americans, 47%, belong to a formal house of worship. Church membership has been below the majority level each of the past two years. When Gallup first asked the question in 1937, 73% were members of a church, and as recently as 1999, 70% were. 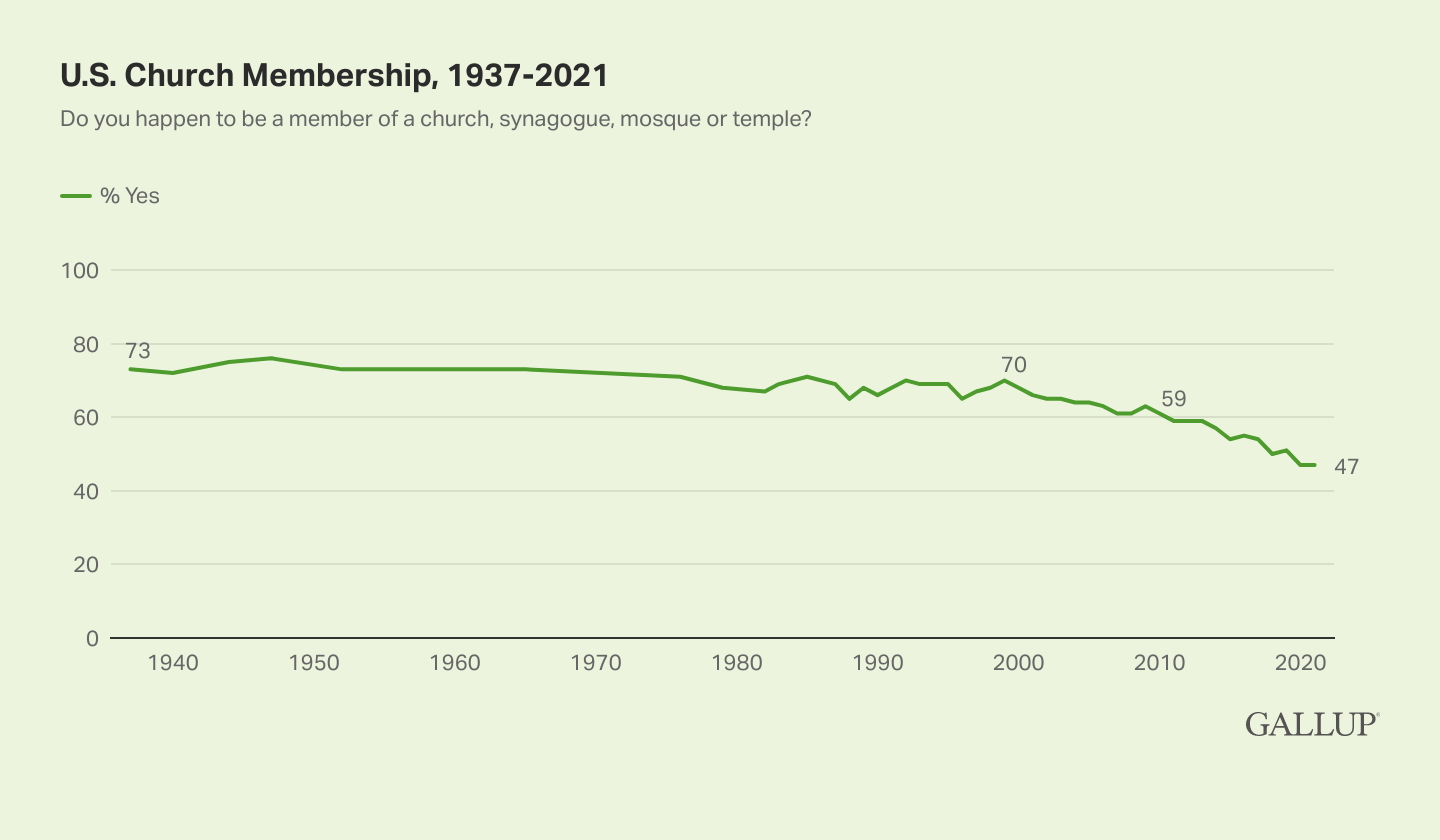 Line graph. U.S. Church Membership. When Gallup first asked about church membership in 1937, 73% of Americans said they were a member of a church. The percentage stayed near 70% for much of the next few decades, and was 70% as recently as 1999. By 2011 the figure had dropped below 60%, and has continued to decline to 47% in each of the past two years.

The decline in formal church membership has largely been driven by younger generations of Americans. About one in three U.S. young adults have no religious affiliation. Further, many young adults who do identify with a religion nevertheless do not belong to a church. But even older adults who have a religious preference are less likely to belong to a church today than in the past.

Gallup measures religious attitudes and behaviors each year as part of its Gallup Poll Social Series.

Results for this Gallup poll are based on telephone interviews conducted May 3-16, 2021, and Dec. 1-16, 2021, with a random sample of 1,837 adults, aged 18 and older, living in all 50 U.S. states and the District of Columbia. For results based on the total sample of national adults, the margin of sampling error is ±3 percentage points at the 95% confidence level. All reported margins of sampling error include computed design effects for weighting.