WASHINGTON, D.C. -- During his first year in office, an average of 48.9% of Americans approved of the job President Joe Biden was doing. Biden's job approval ratings started relatively strong at 57%, but by September had plunged to 43%. A new Gallup poll finds 40% of U.S. adults approving of the job he is doing, his lowest to date.

Gallup measured Biden's job approval ratings on 13 occasions during his first year in office, including the most recent update from a Jan. 3-16 poll.

His ratings ranged between 54% and 57% from January through June 2021, as the U.S. saw a steep decline in COVID-19 infections and deaths when millions of American adults got vaccinated against the disease. Biden's public support first showed signs of decline in July amid a surge in infections in the summer, tied to the delta variant of the virus.

After a messy U.S. withdrawal from Afghanistan in late August, marred by a terrorist attack at the Kabul airport that killed 13 U.S. troops, his approval fell further and has yet to show signs of improvement. In the latest survey, 40% of Americans approve and 56% disapprove of the job he is doing, as the U.S. is plagued by the highest inflation in four decades and another surge of COVID-19 cases, this time fueled by the omicron variant of the coronavirus. 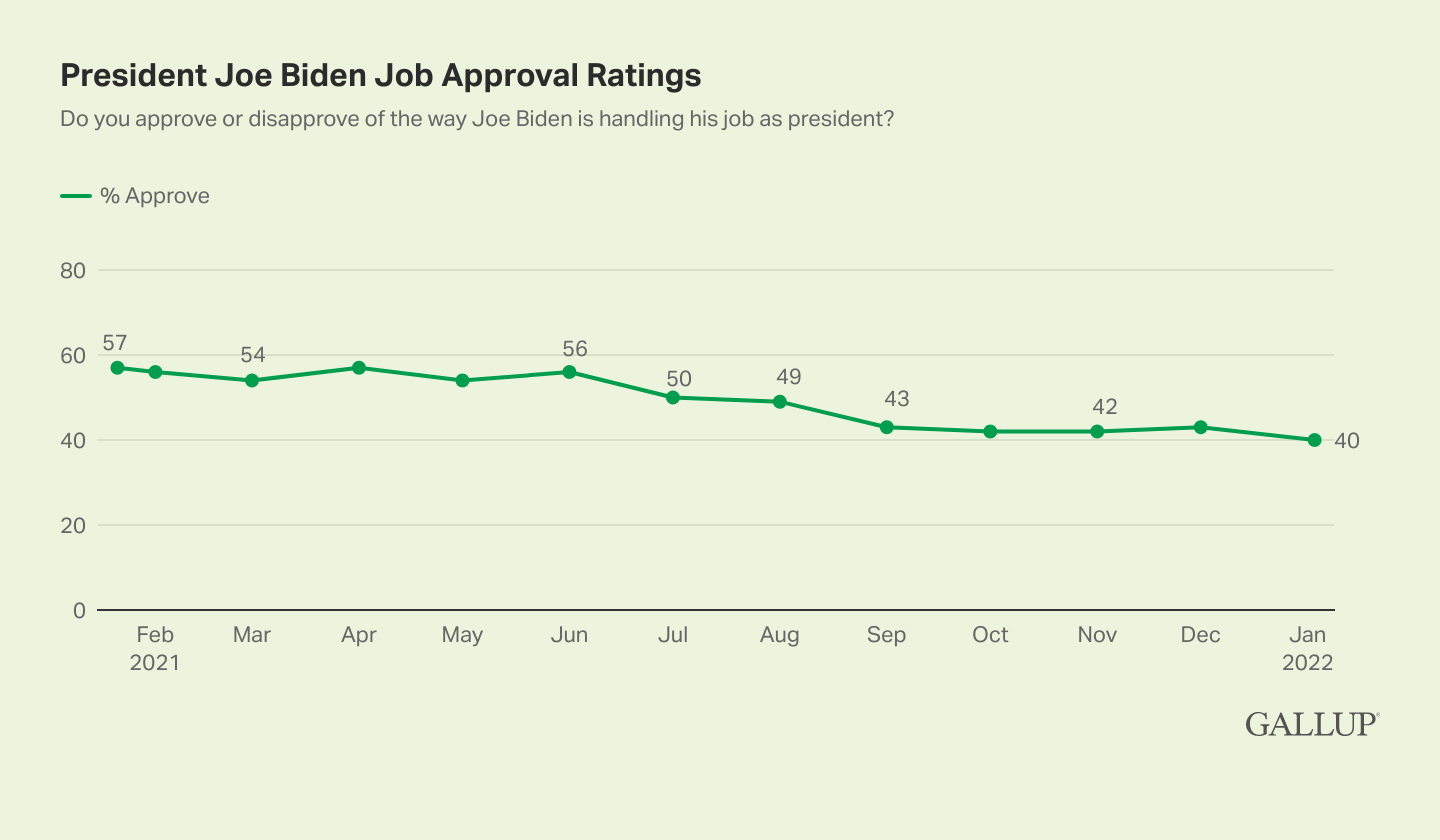 Line graph. Trend in President Joe Biden's job approval rating. Forty- percent of U.S. adults approve of the job Biden is doing as president, similar to the past four months but lower than in readings taken in January through August.

For Biden's most recent quarter in office, his fourth, which spanned from October 20 through January 19, an average of 41.7% of U.S. adults approved of Biden. Only Trump's fourth-quarter average was lower than Biden's, at 36.9%. All other presidents had fourth-quarter averages of 50% or above, with Barack Obama (50.0%), Ronald Reagan (50.8%) and Clinton (51.0%) closest to that mark. George W. Bush's 85.7% fourth-quarter average is the highest, as Americans rallied around his presidency after the 9/11 terrorist attacks.

Biden Has Lost Most Support Among Independents

The decline in Biden's approval over the course of 2021 has mostly been seen among political independents, among whom 33% approve of the president now compared with ratings of 50% or higher during the first six months of his presidency.

However, the last two Gallup polls show the president's support among his fellow Democrats is also slipping, to around 80% from 90% or higher prior to December.

Republicans' approval of Biden has been exceedingly low, typically below 10%, while Democrats' approval has generally been high. 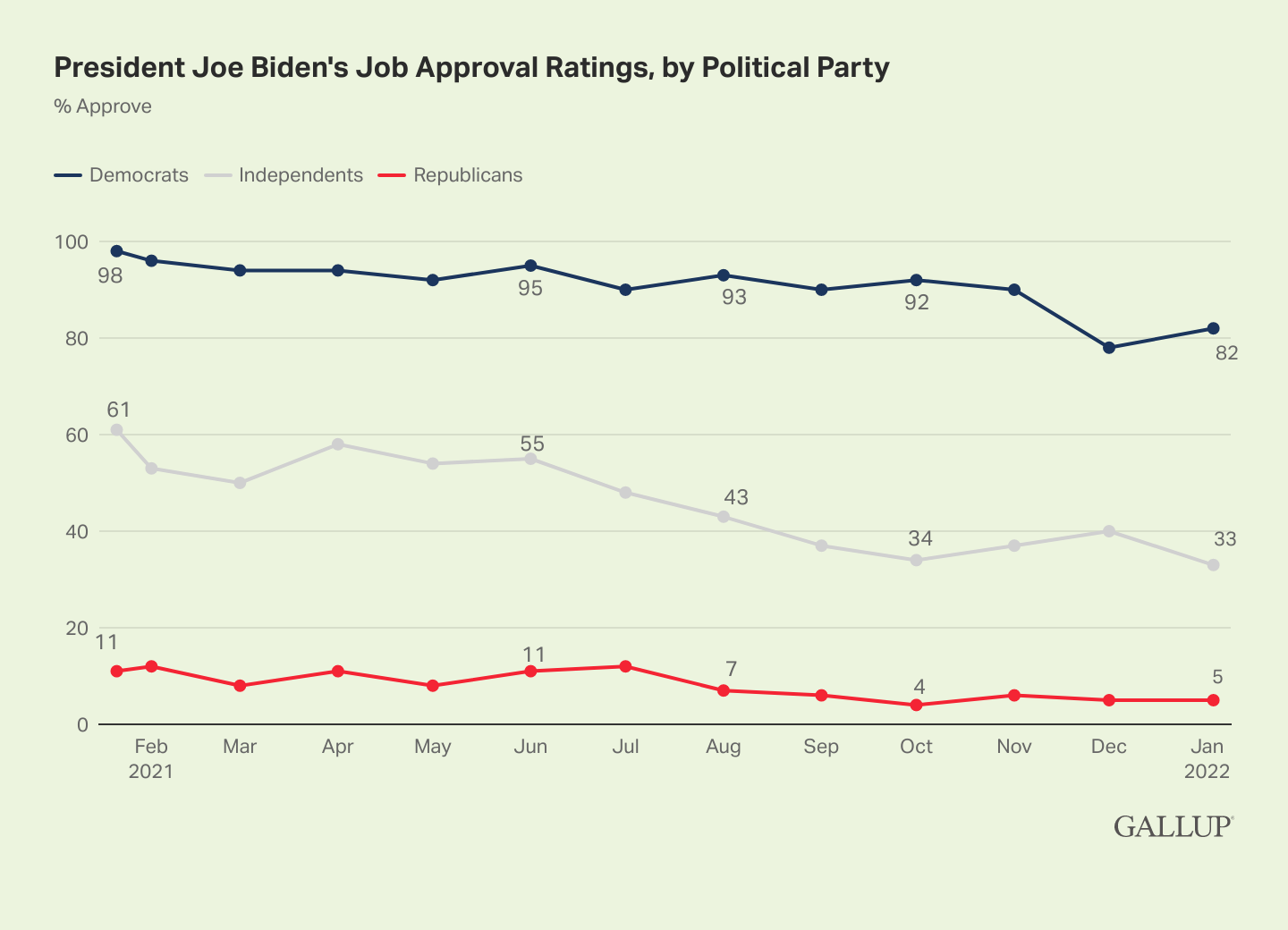 Line graph. Trend in Biden's job approval ratings by political party. Currently, 82% of Democrats approve of how Biden is handling his job as president, down from readings above 90% between January-November 2021. Biden's approval among independents is 33%. It was 61% in the first Gallup poll measuring Biden job approval and in the 50s through June, before dropping to 43% in August. It has been mostly in the 30s since then. Biden's approval among Republicans is 5% in the latest poll and has been mostly in the single digits since he became president.

Record Polarization for a First-Year President

Biden's extremely low approval ratings from Republicans throughout 2021, and the extremely high ratings from Democrats, led to levels of political party polarization beyond any for a first-year president and only exceeded once previously in any presidential year.

On average during his first year as president, Biden averaged 91% approval among Democrats, 46% among independents and 8% among Republicans. The average 83-percentage-point Democratic-Republican gap exceeded that for prior first-year presidents by a significant margin.

Before Biden, the most polarized first year belonged to Trump, with an average 75-point party gap in approval ratings. Trump's ratings were as low among Democrats as Biden's are among Republicans, but Trump's fellow Republicans were less likely to approve of him during his first year (83%) than Democrats were of Biden.

Other presidents' first-year ratings were far less polarized, primarily because supporters of the opposition party were more charitable in their ratings than they have been for Trump and Biden. Twenty-three percent of Republicans approved of the job Clinton and Obama were doing their first year in office, and 39% of Democrats approved of Reagan.

All other first-year presidents enjoyed job approval of close to 50% or higher among those who identified with the opposition party. And nearly all averaged approval ratings of 80% or higher among supporters of their party. All but Clinton, Trump and Biden had majority approval among political independents.

Clearly, then, the heightened polarization in presidential approval ratings is a recent phenomenon. It appears to be more a function of how people now evaluate presidents rather than how presidents have performed. U.S. partisans in recent years have become unlikely to approve of a president from the other political party throughout his presidency regardless of the state of the nation or what he has done as president.

Biden's first year in office has come to an end as the anniversary of his inauguration approaches, and he begins his second year on January 20 in a much weaker political position than he began. Unlike Trump, Biden enjoyed an extended honeymoon as president largely because independents evaluated his early performance positively. Once the COVID-19 situation began to take a turn for the worse, independents began to lose faith in Biden, and the Afghanistan situation further eroded their support for him.

Now, it appears some Democrats have also turned on Biden, although he maintains solid support among his own party. Those Democrats who no longer approve of Biden may be frustrated by the lack of progress on Biden's climate change and social spending plan and on voting rights legislation, if not also the state of the nation marked by rising inflation and the ongoing COVID-19 pandemic.

Although Biden can tout a major COVID-19 relief package, a bipartisan infrastructure bill, as well as declining unemployment and solid economic growth on his watch, the negative factors are outweighing the positive ones when Americans, particularly independents, assess his performance.

One reason that Biden has yet to pass major parts of his agenda is that the Democrats hold narrow majorities in the U.S. House of Representatives and Senate. Apart from the infrastructure bill, Biden has been able to advance his legislative priorities only when he could get all Democrats on board, and the Senate could use special rules to pass bills with a simple majority vote since Republicans have been unified in opposition to nearly all of his plans.

With the midterm elections looming later this year and Biden's job approval stuck in the low 40s, the Democratic Party is facing significant losses of congressional seats. If that happens, Biden will have to govern with Republican majorities in his third and fourth years in office, and his ability to pass his agenda will be further hampered.

Results for the latest Gallup poll are based on telephone interviews conducted Jan. 3-16, 2022, with a random sample of 811 adults, aged 18 and older, living in all 50 U.S. states and the District of Columbia. For results based on the total sample of national adults, the margin of sampling error is ±4 percentage points at the 95% confidence level. All reported margins of sampling error include computed design effects for weighting.