Feb. 1 marks the first anniversary of the military coup in Myanmar. This article is the first in a series on what life has been like for people in Myanmar during the year of turmoil since the military takeover.

The sharp drop in people's confidence in their government reflects a year of turmoil in Myanmar, where most people no longer feel safe in their communities and distrust a government that they see as corrupt. 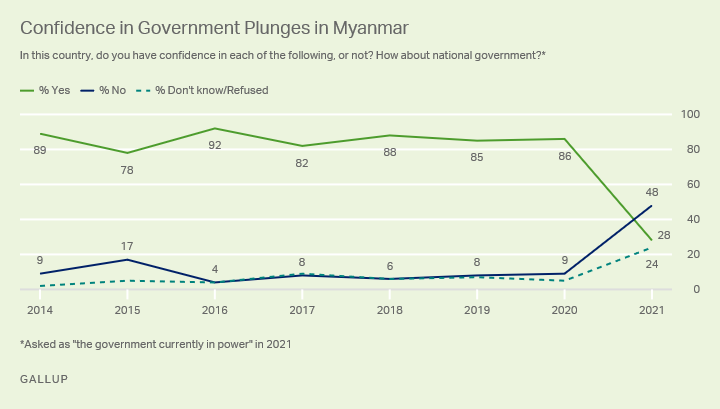 These data come from Gallup's latest survey of Myanmar, conducted Sept. 22-Dec. 2, 2021, as civil unrest and military crackdowns continued throughout the country. Before the Feb. 1, 2021, coup, confidence in the country's civilian government had been consistently high, never dropping below 78% in Gallup's trend since 2014.

Myanmar had been a military dictatorship from 1962 through 2011, when the government transitioned to a quasi-democracy. The country appeared to have been on a trajectory to increasingly democratic rule, until the military refused to accept the results of the 2020 elections and took over.

After initially allowing pro-democracy protests, the military's response turned brutal. It has tried to eliminate resistance along its borders, burning down homes and bombing civilians.

Reports of violence both by opposition groups targeting the government and by government forces targeting those groups continue to filter out of the country. With bombings and shootings almost a daily occurrence across the country, people's sense of safety has quickly deteriorated.

A record-high 59% of people in the country now say they do not feel safe walking alone at night where they live, nearly double the 30% who said the same the year before. 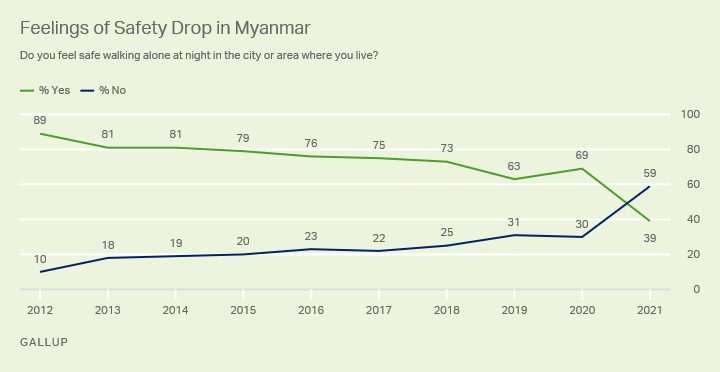 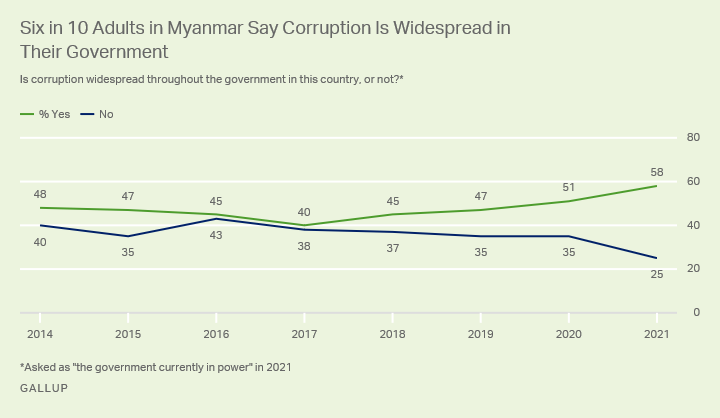 The military's actions during the unrest that has followed the coup have likely further served to shake confidence as the security situation in the country has deteriorated. The longer the unrest continues, with widespread violence by both sides, the more this may affect the public's confidence in the government, particularly if government forces are seen to have taken part in criminal activity.