WASHINGTON, D.C. -- Thirty-seven percent of Americans -- unchanged from a year ago -- are satisfied with the position of the United States in the world today. This rating remains well below the 53% recorded in February 2020, a recent high point just before the onset of the coronavirus pandemic. It is also below the average percentage satisfied (43%) in Gallup's annual measurements since 2001. 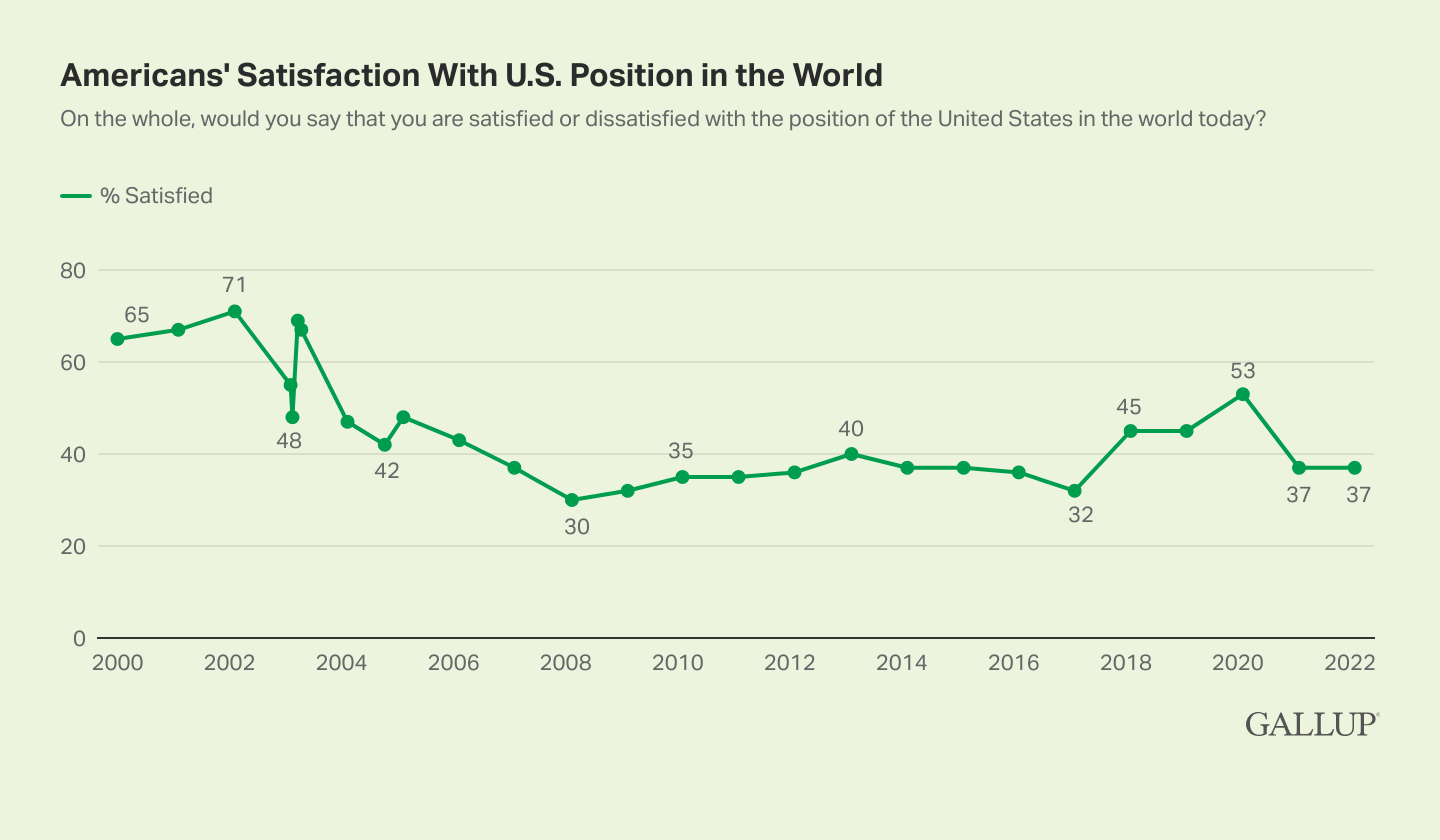 Americans' satisfaction with the nation's position reached 71% at its peak in 2002, shortly after the 9/11 attacks, which spawned a wave of pro-America fervor. Sentiment reached its record low of 30% in 2008 after several years of decline in George W. Bush's second term, likely due to the increasingly unpopular Iraq War. Satisfaction remained mostly below 40% during Barack Obama's presidency before jumping to 45% in Donald Trump's second year, and remained at that elevated level or higher until last year.

The latest results are based on a Feb. 1-17 Gallup survey. The poll was conducted as President Joe Biden was monitoring Russia's military buildup on the Ukraine border, but ended before Russia's invasion of Ukraine.

Less Than Half Think U.S. Is Popular Around the World

The poll also updated Americans' perceptions of the United States' global image. Just under half, 48%, believe their country rates favorably in the eyes of the world. This is similar to sentiment a year ago (49%) and is the lowest since the first year of Trump's presidency, when 42% thought the U.S. was viewed favorably.

More typically, a majority of Americans over the years have thought the country enjoys a favorable image internationally. Before 2017, this measure was below 50% only during George W. Bush's second term, and that carried over into a low reading at the start of Obama's presidency in 2009. 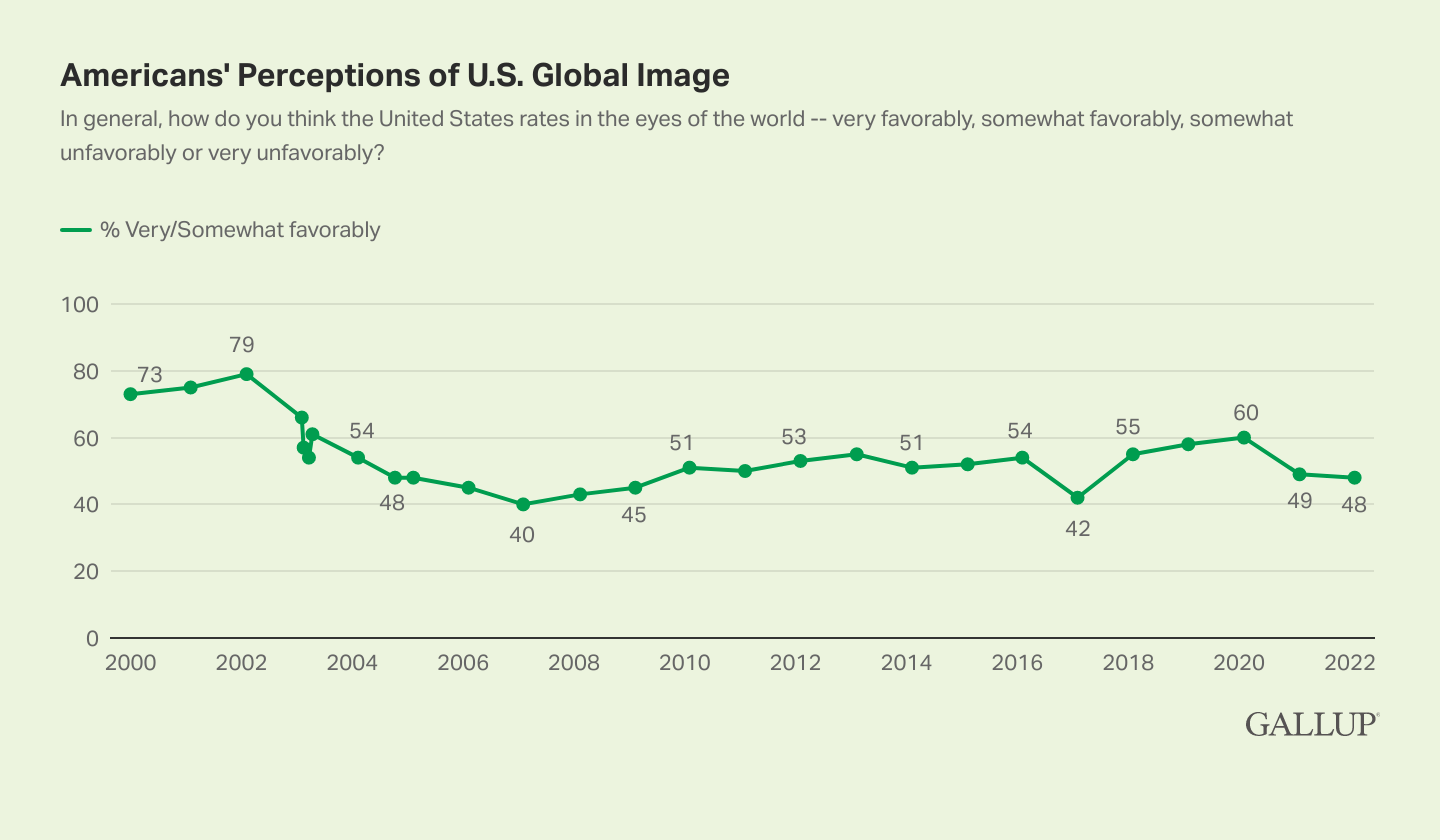 Line graph. Trend by party in Americans' satisfaction with the United States position in the world, from 2000 to 2022. Satisfaction has varied sharply by the party of the sitting president, with large majorities of Republicans satisfied during most of George W. Bush's and Donald Trump's presidencies and more than half of Democrats satisfied during the presidencies of Barack Obama and Joe Biden. Majorities of both party groups were satisfied in 2000, at the end of Bill Clinton's presidency. Political independents' satisfaction has generally been halfway between the two party groups, similar to the national average.

Republicans' satisfaction with the nation's global position was as high during Trump's presidency as it was in the remarkably patriotic years immediately after the 9/11 attacks, reaching 85% in February 2020. But by the start of the Biden presidency in February 2021, that had plunged to 22%, and it has slipped further to 8% today -- a total decline of 77 percentage points.

Democrats have become more positive, but not enough to offset Republicans' downward trend. Their satisfaction with the nation's global position has increased a total of 39 points over the past two years, climbing from 19% in February 2020 to 45% in February 2021, and rising further to 58% this year. Today's level is similar to what it was during the Obama presidency, while well short of Democrats' 78% satisfaction recorded under Bill Clinton in 2000.

Independents' satisfaction fell eight points last year, to 39%, and remains at that level in 2022. 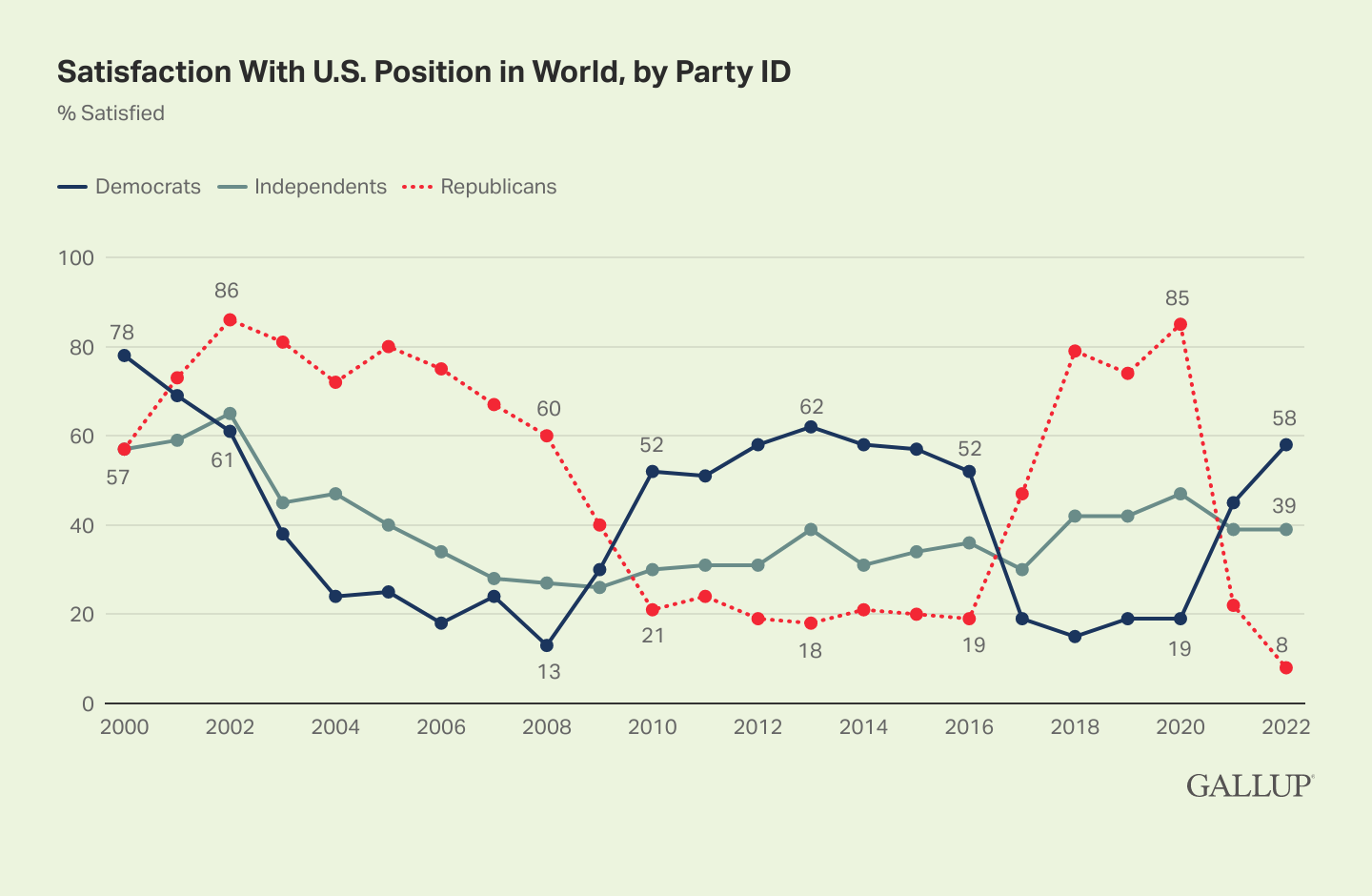 The partisan trends are similar with respect to how people think the U.S. is viewed globally.

Republicans' belief that the nation is viewed positively was extraordinarily high under Trump (84% in 2020), only to fall 46 points by early 2021 and slip another four points in the latest reading to 34%. Independents' perspectives have also soured since 2020, although falling by a more modest 12 points to 46%.

Democrats' perceptions of the nation's image have improved since 2020 by a total of 31 points. The 64% now saying the country is viewed favorably is on the lower end of the range seen during the Obama administration. 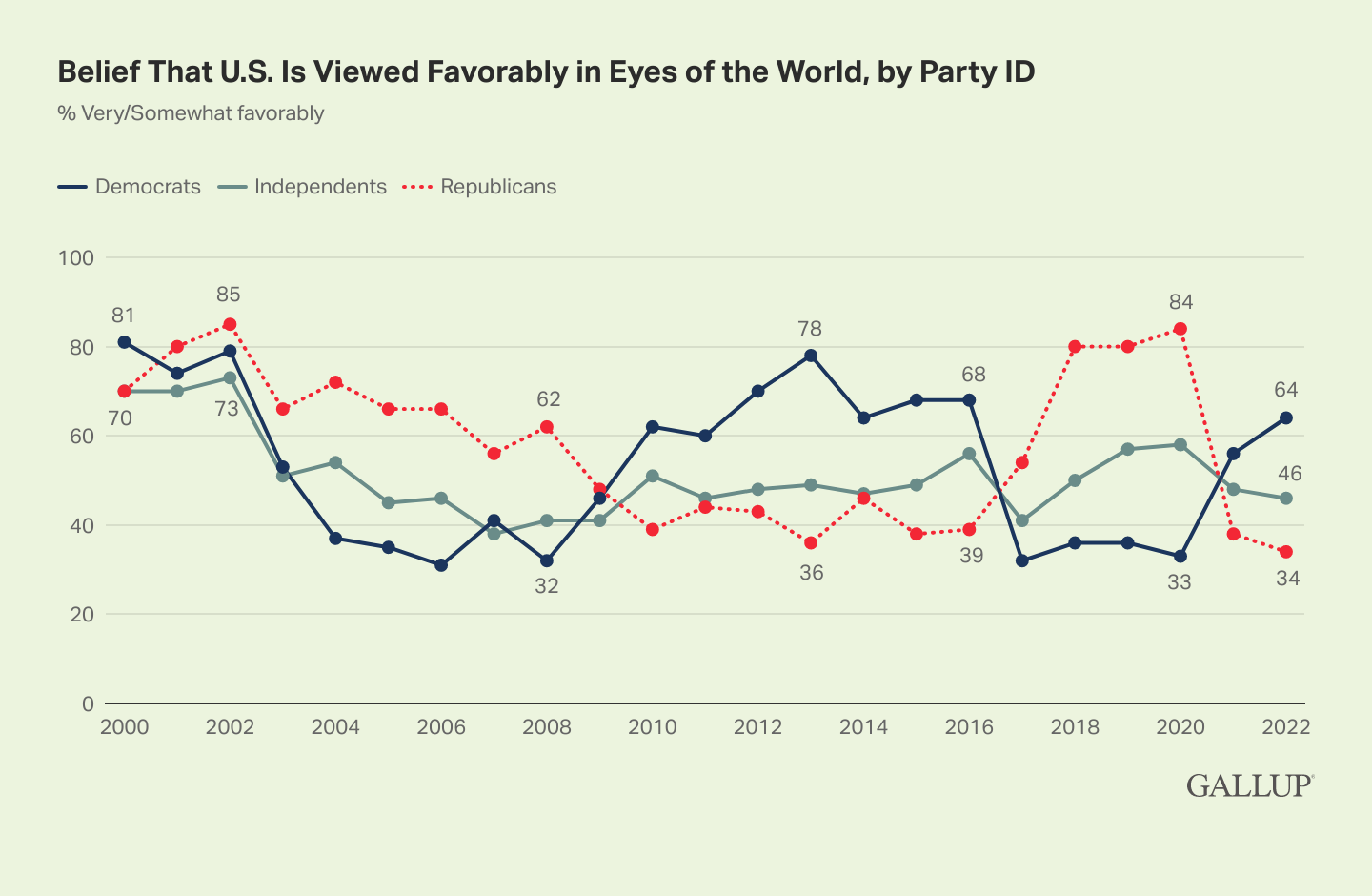 Within the first month of Biden's taking office last year, 58% of Americans believed that leaders of other countries around the world respected him, while just 40% think this today.

That decline parallels Biden's job approval rating over the same period, which fell from 56% in February 2021 to 41% today. Still, his 40% rating for being respected exceeds Trump's score in all four years of his presidency and is well above the 21% and 24% ratings found for George W. Bush at the end of his second term. 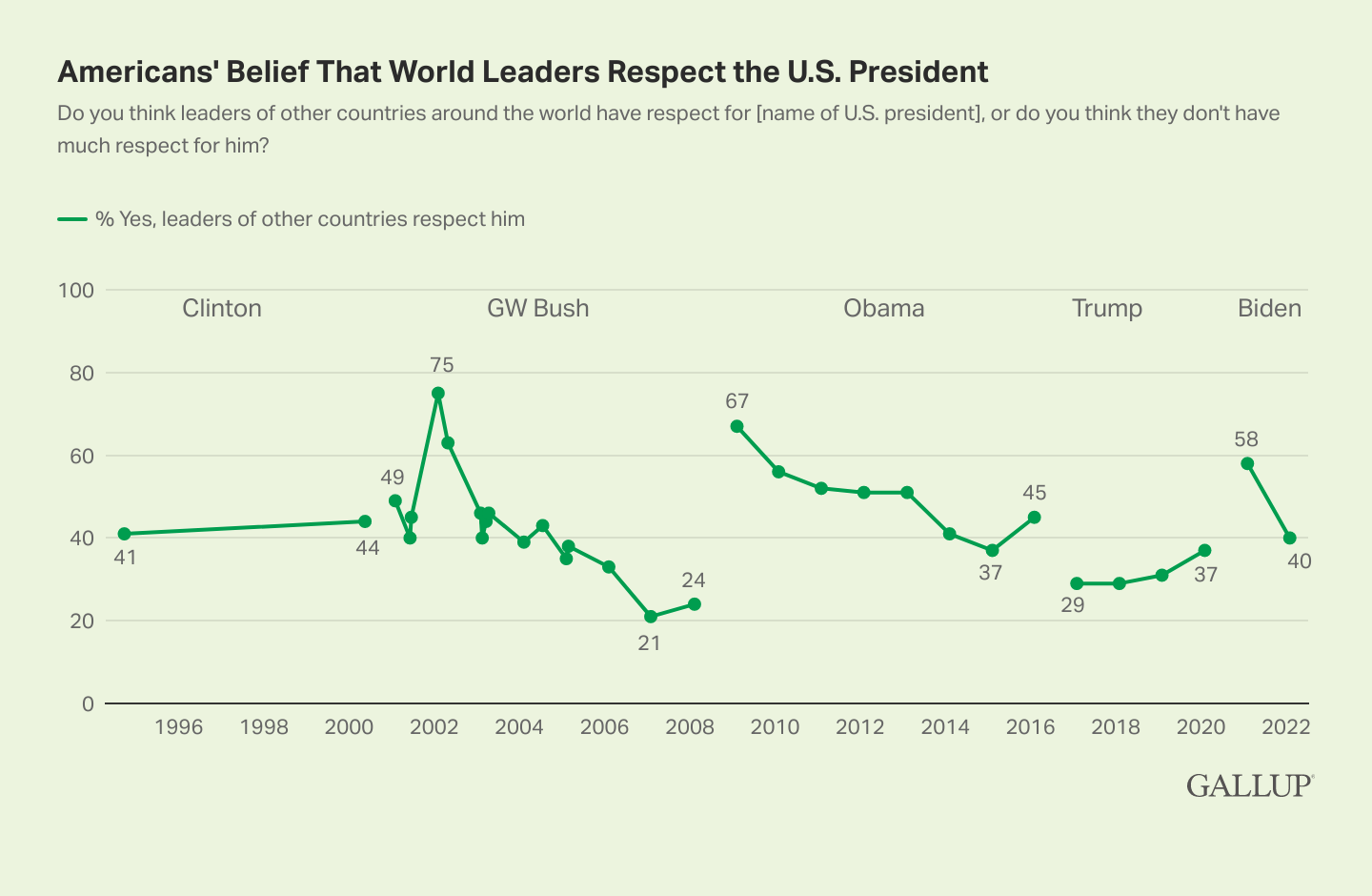 U.S. Democrats feel better about the nation's image and position in the world with Biden in the White House than they did under Trump. But their enhanced optimism doesn't make up for the sharper declines in Republicans' outlook on both dimensions spanning the presidential transition.

This partisan shift was first seen a year ago, and more recent advancements in Democrats' outlooks have merely canceled out further declines in Republicans'. As a result, Americans' ratings of the country's global status remain the lowest they've been since 2017.

These findings represent public sentiment about the nation's global status in the runup to the full Russian invasion of Ukraine last week. At the time of that survey, the slight majority of Americans already saw the Russia-Ukraine conflict as a critical threat to U.S. vital interests. That has likely only increased in the days since. How the invasion affects Americans' perceptions of the United States' global status will largely hinge on how they perceive the Biden administration's response.