WASHINGTON, D.C. -- Before the invasion of Ukraine, amid rising tensions between Russia and the West, 52% of Americans see the conflict between Russia and Ukraine as a critical threat to U.S. vital interests. That's a change from 2015, after Russia annexed the Crimean peninsula, when less than half of U.S. adults, 44%, thought it posed that serious a threat.

These data come from Gallup's Feb. 1-17 World Affairs poll, conducted before the Russian government began its invasion of Ukraine.

A Clear Majority in U.S. See Russian Military Power as a Critical Threat

When asked separately about the broader threat Russia's military power poses to U.S. vital interests, an even higher percentage, 59%, consider that to be a critical threat. This is up from 44% a year ago and is the highest Gallup has recorded since the item was first asked in 2004. The previous high, 52%, occurred in 2019. The low point was 18% in 2004, a time of better U.S.-Russia relations. 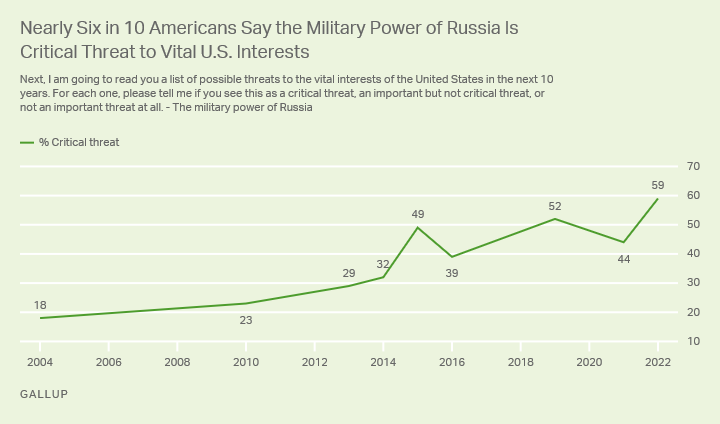 Along with rising concern about the threats it poses, Russia's already tattered image in the U.S. has deteriorated further over the past year -- 85% of Americans now view the nation unfavorably while 15% have a positive opinion of it. That's an eight-percentage-point increase in unfavorable ratings from 2021 and is, by far, Russia's worst rating in over three decades. The U.S. public generally held more favorable than unfavorable views of Russia prior to 2014. Since then, Americans have been substantially more likely to view the country negatively, as tensions have increased over Ukraine and Russian interference in U.S. elections. 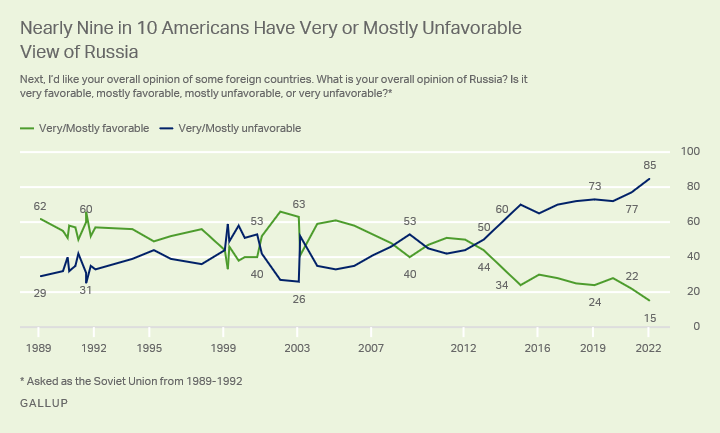 Line graph Americans' views of Russia. Currently, 85% of Americans have a very or mostly unfavorable view of Russia, while 15% view the country favorably.

Republicans and Democrats are united in their negative views of Russia, with 88% of both groups holding an unfavorable view of the country, compared with 82% of independents. In 2021, Republicans and independents were equally likely to view the country negatively, with 74% of both groups expressing unfavorable views, while 84% of Democrats did so.

Meanwhile, Ukraine's image remains positive, as it has in each of four measures since 2005. Currently, 62% of Americans view it favorably, up slightly from 57% in 2020. Thirty-four percent of Americans currently view Ukraine unfavorably. Americans' opinions of Ukraine were most positive in the initial 2005 reading -- 67% favorable and 18% unfavorable. 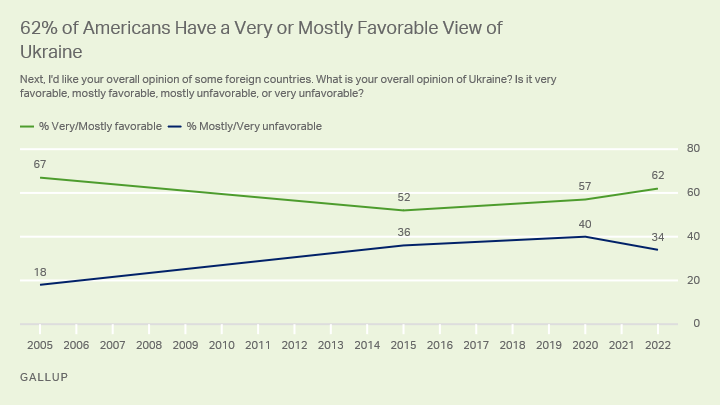 An equal 66% of Democrats and independents view Ukraine favorably, while slightly fewer Republicans (57%) do so.

The NATO alliance has taken on enhanced significance in the current tensions as Russia has demanded that Ukraine never become a member of NATO. The U.S. and other NATO partners say that membership should be up to individual countries, consistent with historical precedent, and Ukraine asserts its right to make defense decisions autonomously.

Overall, as President Joe Biden works with the United States' NATO allies to contain the Russia-Ukraine situation, Americans are split on how well the mutual defense pact is doing its job. Forty-eight percent say it is going a good job, while 45% say it is doing a poor job.

While Republicans and Democrats generally hold similar views of the threat posed by Russia and of Russia and Ukraine in general, they diverge sharply on the NATO alliance. A clear majority of Democrats, 70%, say the alliance is doing a good job trying to resolve the problems it has to face, compared with roughly a quarter of Republicans, 27%, who say the same.

Overall, a clear majority of Americans support the NATO alliance, with 65% in favor of maintaining (18%) or increasing U.S. commitment (47%), compared with 33% who favor decreasing the commitment or withdrawing completely.

There is also a substantial partisan gap when Americans are asked about the U.S. commitment to NATO. Among Democrats, support is substantially higher, with 81% in favor of maintaining or increasing commitment, while 46% of Republicans agree.

Prior to the escalation of the Russia-Ukraine situation this week, Americans were not convinced that Biden was in command of the situation, with just 36% approving of how he is handling relations with Russia. This is lower than Biden's overall job approval of 41% in the same poll and reflects fewer than two-thirds of his fellow Democrats approving (64%), along with a third of independents (35%) and just 11% of Republicans.

As global political tensions mounted over Russia's stance toward Ukraine in recent weeks, Americans viewed the situation warily, seeing both Russia's military and the Russia-Ukraine conflict as significant risks to the U.S. It is unclear if Americans are now even more likely to see the Russia-Ukraine situation as a critical threat to U.S. interests than they were a week ago. Sanctions imposed by the U.S. and other countries could exacerbate inflation in the U.S., and U.S. stock values plunged this week, likely in response to rising Russia-West tensions.

Ukraine clearly has Americans' sympathy in the conflict, but it's not clear they want to engage Russia to protect it. While Americans aren't sold on NATO, they give it decent marks, notable at a time when Biden himself gets poor ratings for his handling of Russia.

Editor's note: On March 28, 2022, the graph concerning Americans' views of Ukraine was updated to reflect the accurate dates of the previous survey.