WASHINGTON, D.C. -- Americans' satisfaction with a variety of aspects of U.S. society and the state of policy in key issue areas remains subdued in 2022 after falling in 2021. In fact, in only one area -- acceptance of gays and lesbians -- are more Americans satisfied now than were in 2020, before the COVID-19 pandemic.

Over the past year, there have been further meaningful declines in 10 areas, most notably in satisfaction with energy policy, the nation's military strength, the state of the economy, and abortion policy. 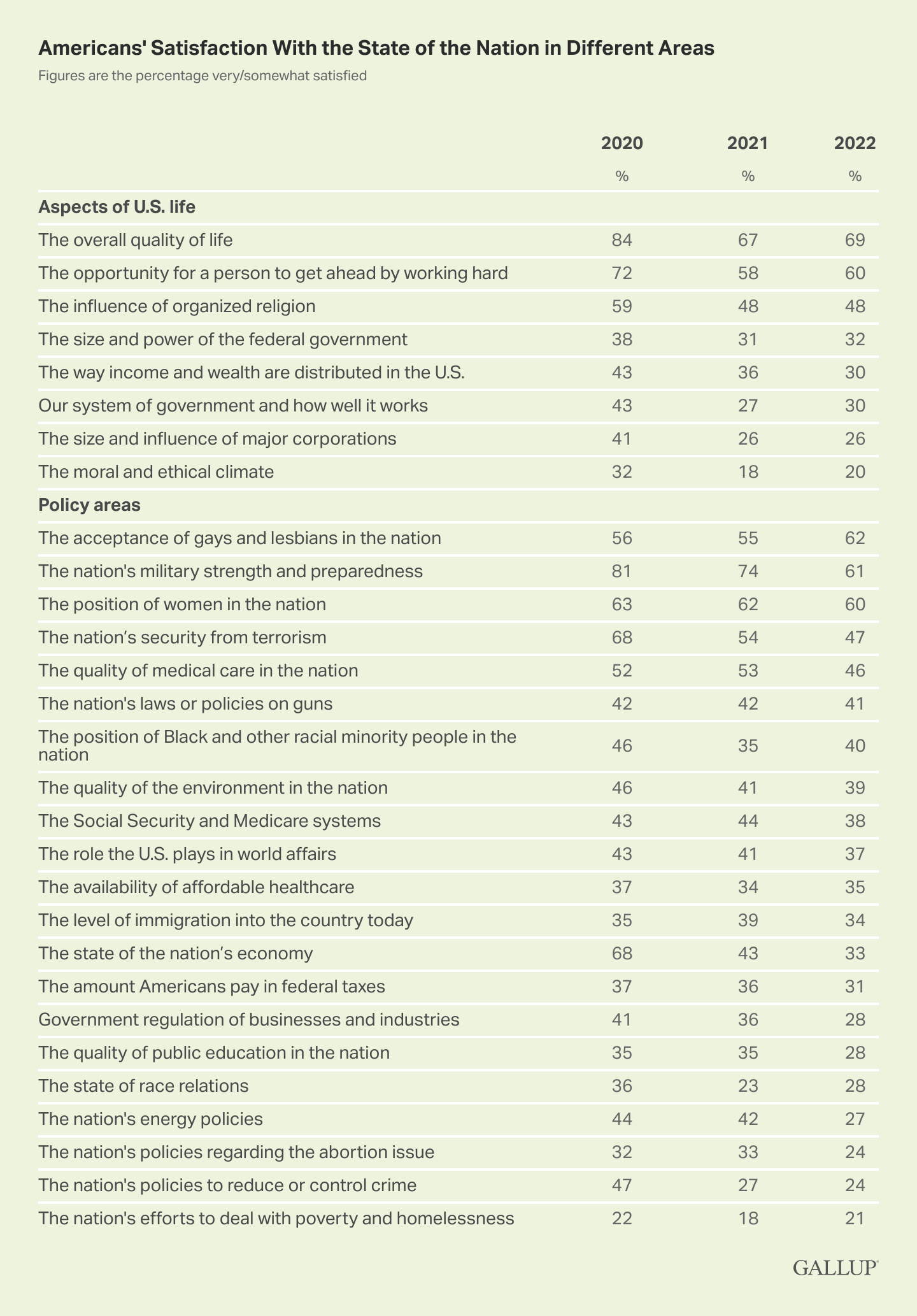 The latest results are from Gallup's annual Mood of the Nation survey, which was conducted Jan. 3-16. This year, Gallup asked Americans to indicate how satisfied they are with eight aspects of the U.S., including the quality of life, opportunity and the governmental system. Additionally, the survey gauged Americans' satisfaction with the state of the nation in 21 different policy areas. These trend questions were first asked in 2001 and have been updated in most years since then.

Last year's Mood of the Nation survey captured a dour public, likely reflecting that it coincided with the deadliest phase of the coronavirus pandemic and the Jan. 6 attack on the U.S. Capitol. Although President Joe Biden took office in late January 2021 with solid public support, the continuation of the pandemic, the unexpectedly difficult withdrawal of U.S. troops from Afghanistan and persistent inflation have driven down his rating. Relatedly, Americans are no more satisfied with most aspects of the state of the nation now than they were a year ago.

A year ago, an average of 39% of U.S. adults were satisfied with the seven societal aspects measured consistently since 2001, the lowest in the trend. This year, the average for those same aspects is virtually unchanged at 41%.

Also in 2021, an average of 39% were satisfied with the state of the nation in the 16 issue areas that have been rated consistently since 2002, which tied for the lowest average to date. This year, the average on those same issues has fallen to a new low of 35%.

Of all the issues and societal aspects measured in the survey, satisfaction with energy policies has fallen the most this year. Higher gas prices are likely the reason this sentiment has dropped 15 percentage points in the past year. Energy satisfaction had generally been stable between 2014 and 2021, before the steep decline this year. The 27% currently satisfied with energy policies is the lowest Gallup has measured in its trend. Gallup did not ask this question from 2009 through 2011. 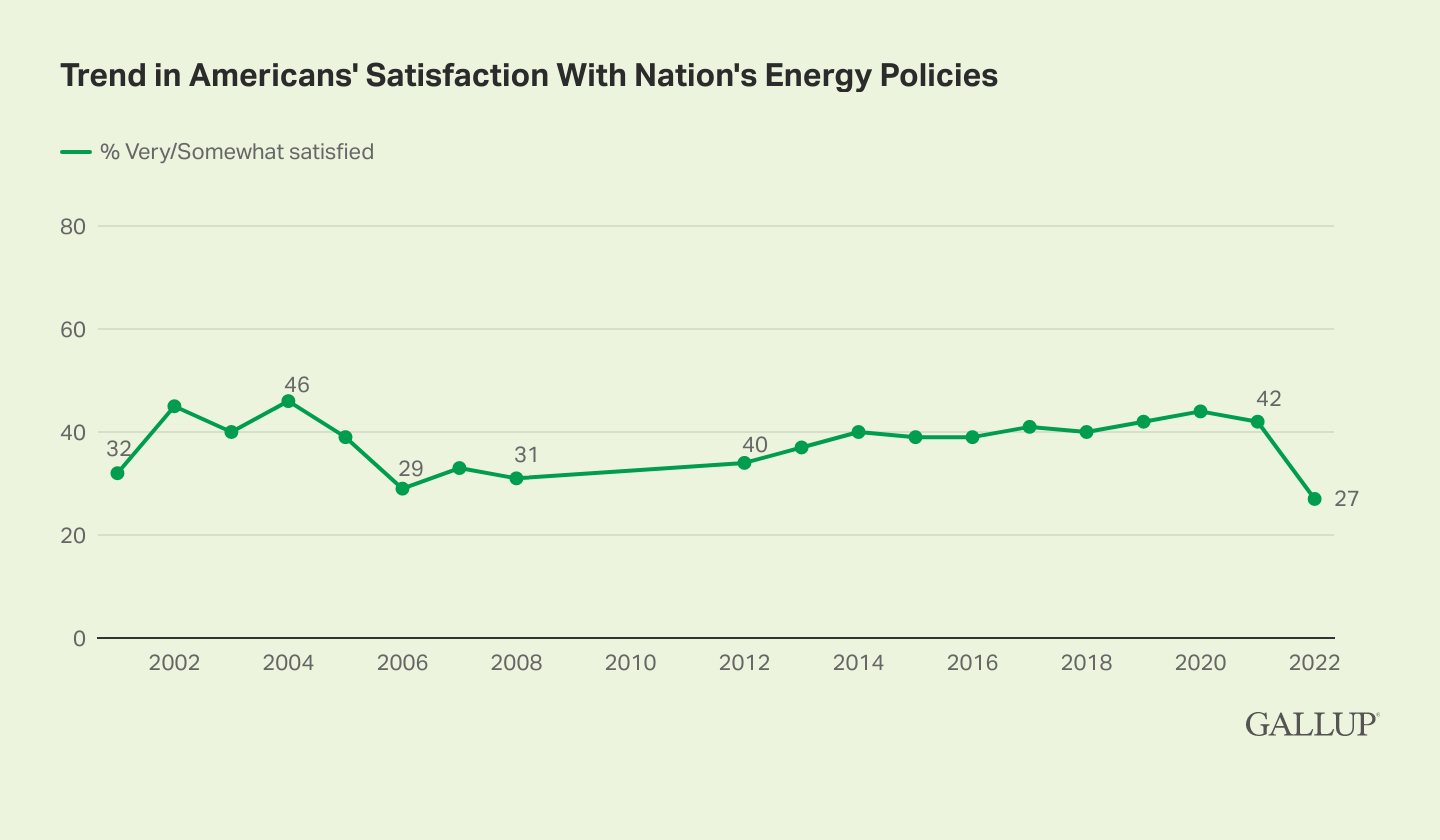 Inflation is likely a major driver of decreased satisfaction with the state of the economy, which fell 10 points to 33% in 2022 after a 25-point drop in 2021, as the economy was affected by the coronavirus pandemic. The decline in satisfaction this year has occurred even though unemployment, economic growth and the stock market improved last year. Americans were less satisfied with the state of the economy in 2012 (13%), as well as in 2013 and 2014. Satisfaction may also have been lower than today in 2009 through 2011, when the poll was not conducted. 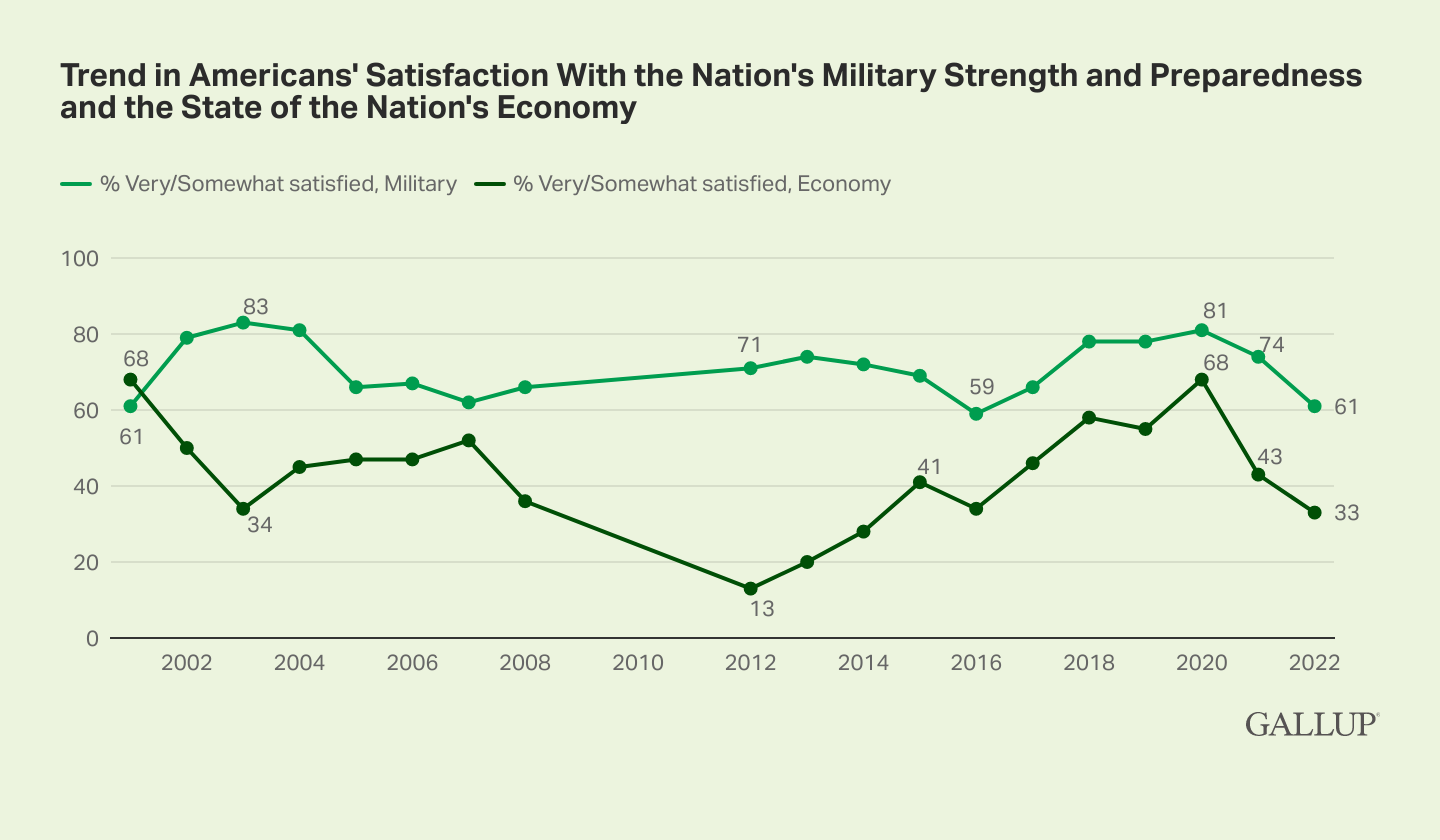 In addition to energy, the military and the economy, there have been meaningful declines in the past year in satisfaction with six other policy areas and one broader societal aspect:

The declines over the past two years have left a number of items at new lows. These include energy policies, abortion policies, the quality of public education, government regulation of business, the quality of the environment (39%), the U.S. role in world affairs (37%) and crime policies (24%). Satisfaction with the size and influence of major corporations (26%) and the influence of organized religion (48%) tied lows established last year.

Public Most Satisfied With Quality of Life

Sixty-nine percent of U.S. adults are satisfied with the overall quality of life in the U.S. -- the highest for any item measured in the survey. Still, the percentage satisfied is down from 84% in 2020 and is near the low of 67% measured last year.

Roughly six in 10 are also satisfied with the acceptance of gays and lesbians (62%), U.S. military strength and preparedness (61%), the opportunity for a person to get ahead by working hard (60%), and the position of women in the U.S. (60%).

At the other end of the spectrum, Americans are least satisfied with the moral and ethical climate (20%), the nation's efforts to deal with poverty and homelessness (21%), crime, abortion, the size and influence of major corporations, and energy policies.

Satisfaction with the state of race relations, the quality of public education and government regulation of businesses and industries are also below 30%.

Republican Satisfaction Mostly Down Under the Biden Administration

Since last year, Republicans' satisfaction with many of these aspects of the state of the nation has decreased, while Democrats' has generally increased. These shifts reflect the tendency for partisans' evaluations of national conditions to be more positive when a president of their own party is in the White House and less positive when a president of the other party is.

On average, Republicans' satisfaction has fallen 15 points across the issue areas and societal aspects. The largest drops in Republican satisfaction are on energy policy (45 points), security from terrorism (43 points), and the economy (38 points).

While Republicans are more pessimistic about the state of most of these issues, their satisfaction with 12 of them has not shown meaningful change (11 points in either direction) since last year.

Majorities of Republicans remain satisfied with the state of the nation in nine areas, most notably the position of women in the U.S. (74%), the opportunity to get ahead by working hard (70%) and the overall quality of life in the U.S. (66%). 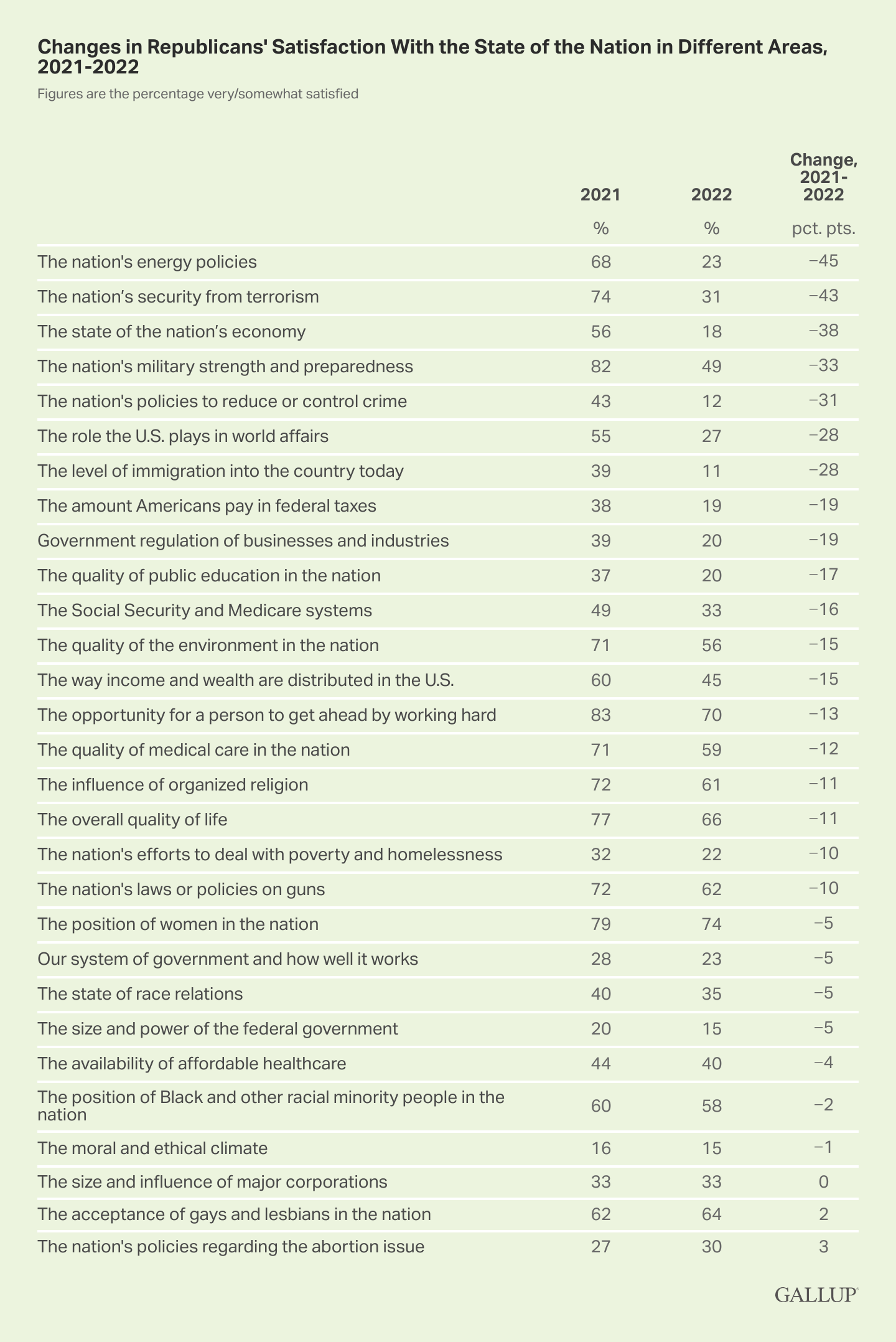 Table. Changes in satisfaction with different areas of the state of the nation, among U.S. Republicans from 2021 to 2022. The largest decline was for the nation's energy policies, with Republicans' satisfaction on this issue declining to 23%, down from 68% in 2021, and security from terrorism, down to 31% from 74% in 2021. No areas showed a meaningful increase in satisfaction among Republicans.

Democrats' Satisfaction Up Modestly in Some Areas

The increase in Democratic satisfaction has been more modest than the decrease in Republican satisfaction, rising seven points, on average. There has, however, been a meaningful increase of 11 points or more on 11 items.

In contrast to Republicans, Democrats' satisfaction with the economy has increased sharply, from 30% to 58%. Two other large gains among Democrats are on the opportunity for people to get ahead by working hard and the role the U.S. plays in world affairs.

On abortion, Democratic satisfaction has fallen by a significant margin, from 39% satisfied in 2021 to 25% this year, the only meaningful decline for the group. 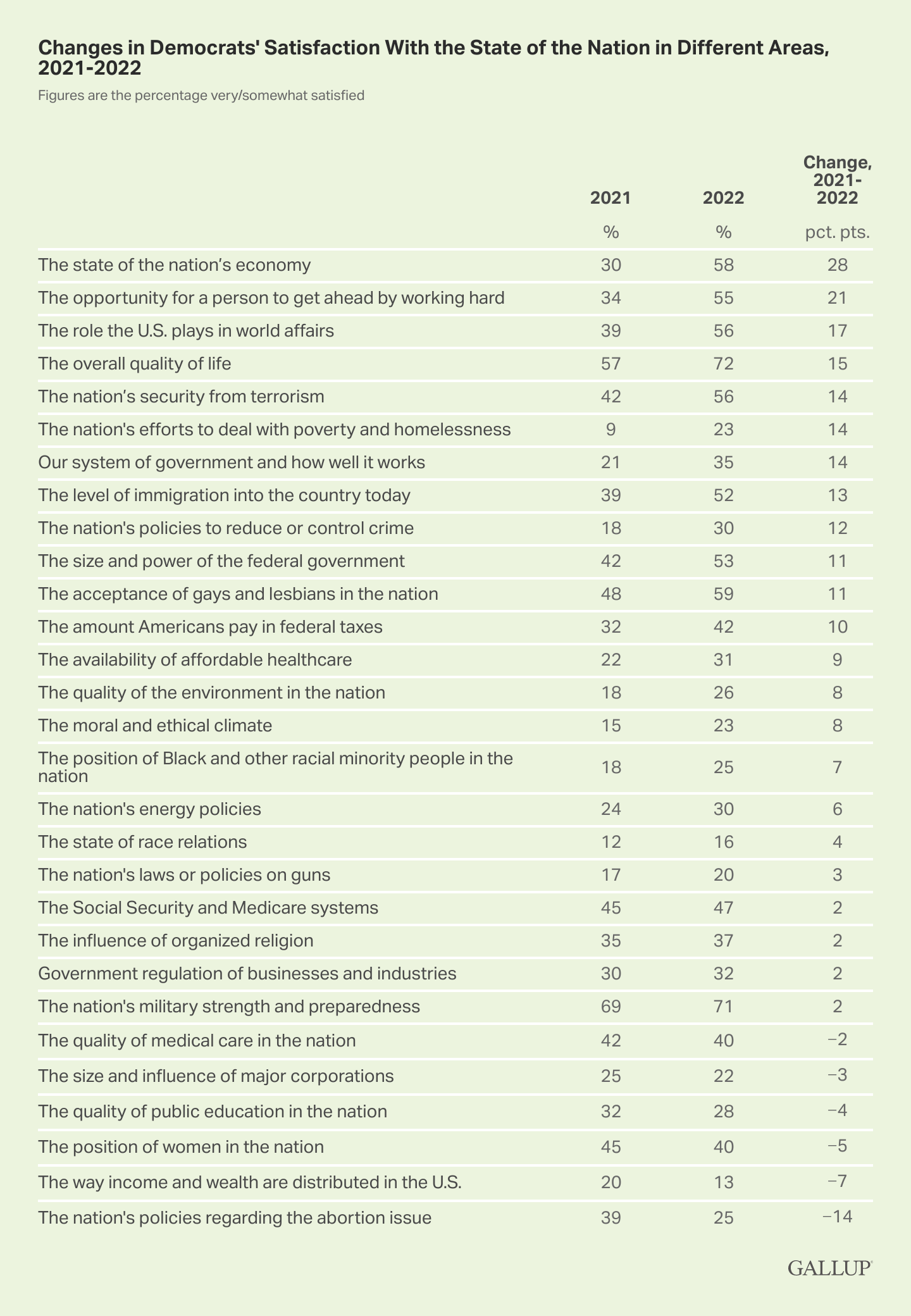 Americans' satisfaction with the state of the nation took a major hit after a difficult 2020 and early 2021, and mostly did not improve in the past 12 months. Collectively, satisfaction at the start of 2022 in a variety of areas is about as bad as it's been in two decades of Gallup measurement. In many areas, such as crime and abortion, the percentage of Americans satisfied has not been lower.

Still, there are areas where most Americans remain satisfied, even if less so than in the past, such as the quality of U.S. life, the strength of the military and the position of women in the U.S. Their satisfaction with the acceptance of gays and lesbians stands in contrast to other areas, with an increase in satisfaction to the highest level measured to date.