WASHINGTON, D.C. -- More Americans expect several key U.S. economic trends to continue in the direction they have generally gone over the past several months rather than to reverse course. This includes predictions of rising inflation, rising stock values and declining unemployment.

Nearly eight in 10 Americans expect inflation to go up, including half who anticipate it will increase "a lot." A similar percentage of U.S. adults, 78%, expect interest rates to rise.

The public is evenly divided on whether economic growth will increase or decrease.

Americans Typically Predict Higher Inflation, but Not Previously to This Degree

In the past, Americans have always been more likely to say inflation will increase rather than decrease, but the current expectation is higher than usual -- in fact, it is the highest Gallup has measured in its trend. The prior high was 76% in September 2005. In recent years, from 2007 through 2020, roughly six in 10 Americans have expected inflation to increase. 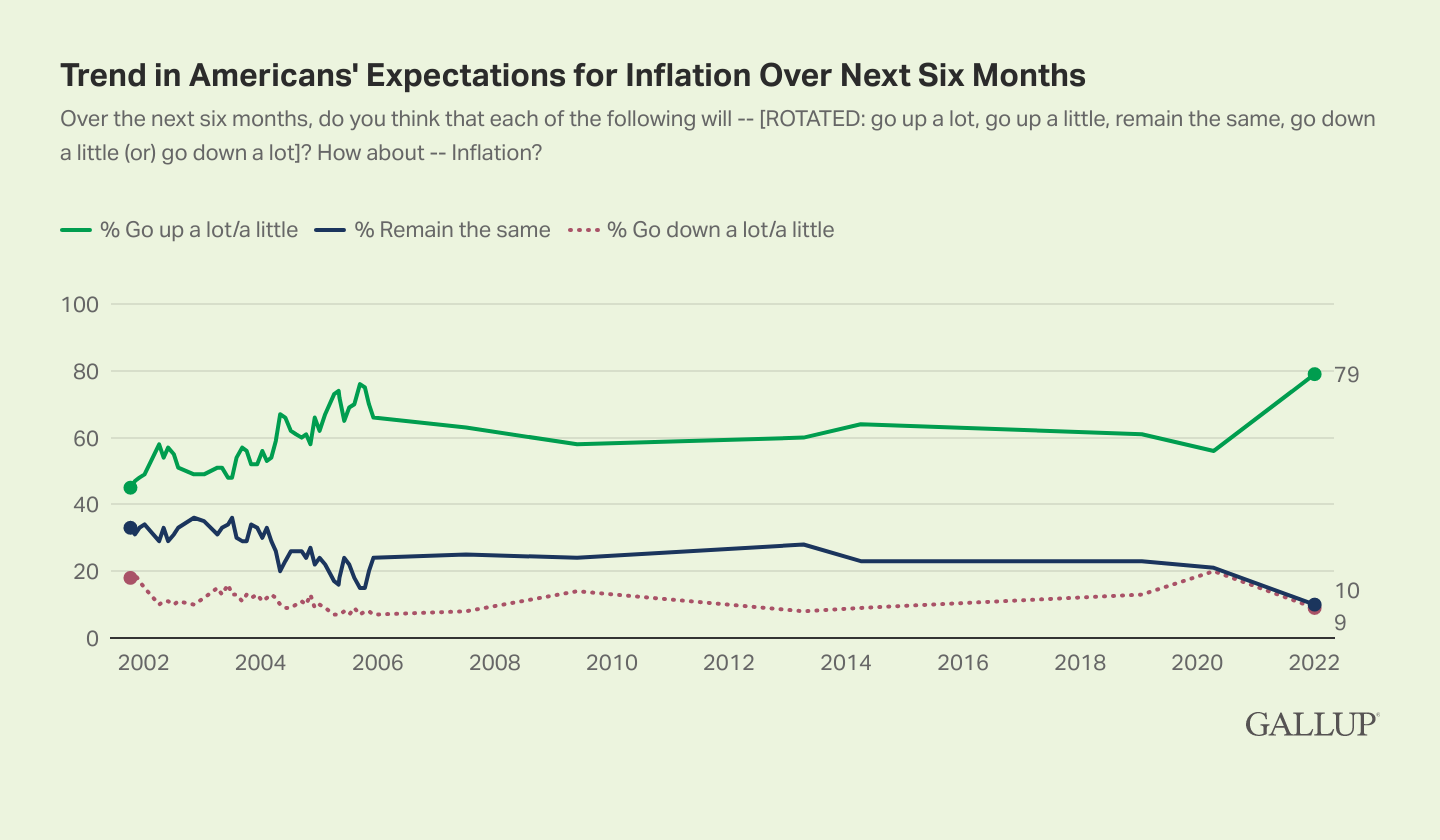 Likewise, Americans typically expect interest rates to rise. The Federal Reserve has yet to increase rates after slashing them early in the pandemic, but Federal Reserve Chair Jerome Powell recently told Congress that he expects the Fed will raise interest rates multiple times in 2022 as a means of bringing inflation under control.

Gallup has historically found expectations of higher interest rates at similar levels to the 78% measured in the current survey. However, in April 2020, shortly after the Fed slashed interest rates, just slightly more expected them to go up (40%) than to go down (32%).

Meanwhile, the current net optimism on unemployment is unusual, but not unprecedented. In 2019 and February 2004, more also expected unemployment to go down rather than up.

Inflation Causing Moderate Hardship for About Half of Americans

A separate Gallup survey finds 49% of Americans saying rising prices have caused hardship for their family, including 9% who say it has caused "severe" hardship affecting their ability to maintain their current standard of living. This is according to a Jan. 3-13 Gallup Panel survey.

Gallup asked the same question in November, and since then has found a slight uptick, from 45%, in the percentage saying they have experienced hardship. In November, 10% said they were experiencing severe hardship, similar to the current figure.

The federal government recently reported that the 7% increase in inflation in December 2021 was the highest increase in nearly four decades.

As would be expected, lower-income Americans are suffering the most from inflation. Two-thirds of U.S. adults with an annual household income of less than $40,000 say they have experienced hardship, with 20% describing it as severe.

Political considerations appear to influence how much people say rising prices are hurting their families, with a smaller proportion of Democrats (36%) than Republicans (60%) or independents (57%) reporting they have experienced hardship.

Each month, Gallup asks Americans to name, in an open-ended question format, the most important problem facing the country. In recent months, a growing percentage of Americans have named inflation as the top problem facing the U.S., including 8% in January. While the latest figure is statistically similar to the 5% to 7% naming inflation in October, November and December, it is significantly higher than the 1% to 2% who did so earlier in 2021.

In 1981, when the inflation rate was even higher than now (10%), 52% of Americans identified inflation as the most important problem. 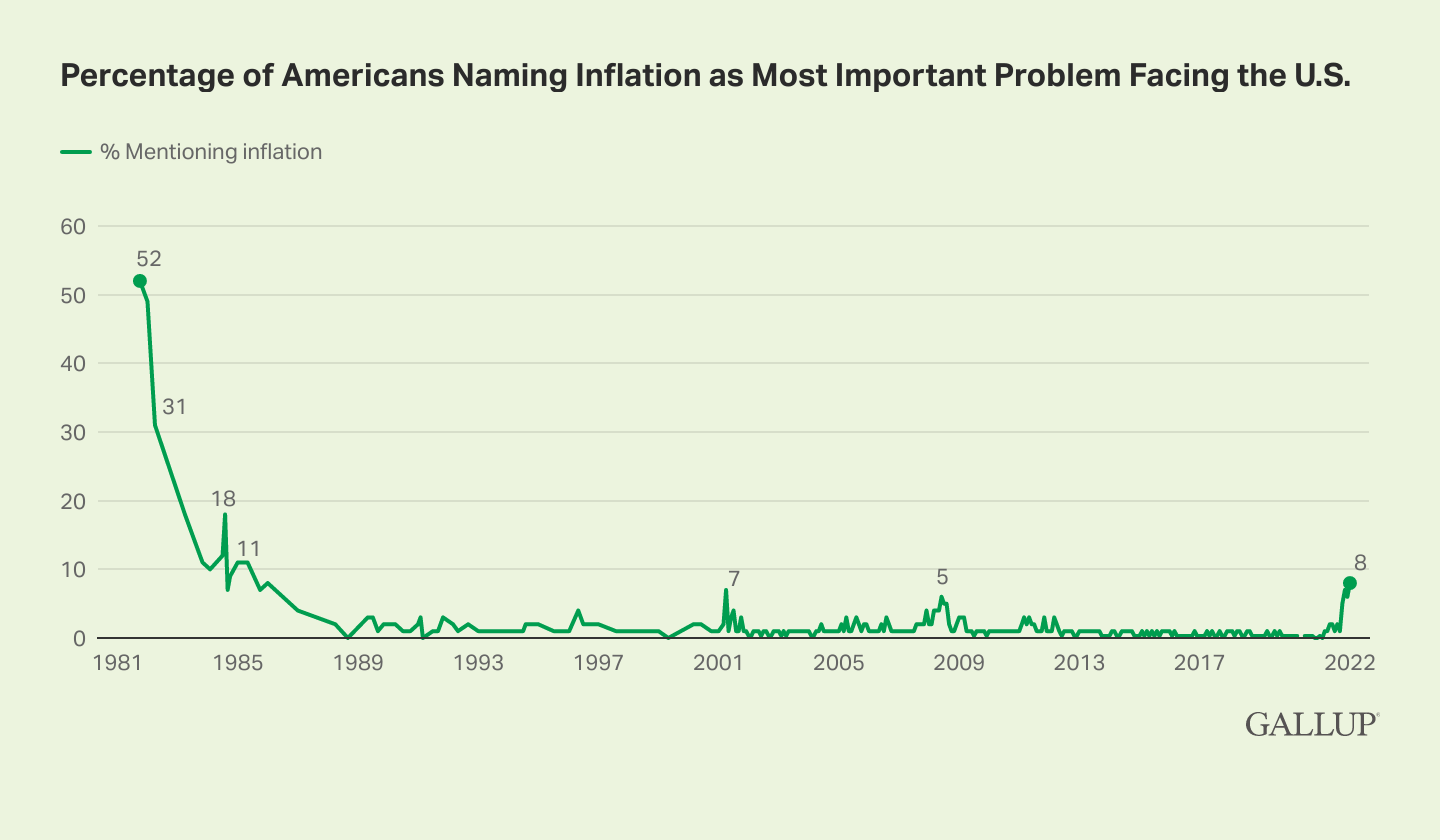 Line graph. Percentage of Americans naming inflation as the most important problem facing the country. Currently, 8% of Americans say inflation is the most important problem, the highest since 11% in 1985. Inflation was much more commonly named between 1981 and 1985 than it is now, including a high of 52% in 1981. Between 1987 and September 2022, inflation had only reached 5% once in 2001 and three times in 2008.

Today, Americans are more preoccupied with the government (23%) and the coronavirus pandemic (20%), which have been the top two issues on the most important problem list since the pandemic began.

Amid heightened concern about inflation, Americans view the economy more negatively than positively overall. Twenty-three percent describe economic conditions as excellent or good, while 37% say they are poor and 40% think they are "only fair." Additionally, 29% say the economy is getting better while 67% believe it is getting worse.

These economic perceptions combine to yield a -26 score on Gallup's Economic Confidence Index, based on the net percentage rating economic conditions positively (% Excellent/Good - % Poor) and saying it is improving (% Getting better - % Getting worse). This is a slight improvement from December's -33 score, which tied for the worst since the pandemic began. The higher January score was mainly due to a less negative assessment of current economic conditions.

The index, which has a theoretical range of -100 to +100, has been below the zero neutral point since July.

Before the pandemic began, Americans were much more positive than negative toward the economy. 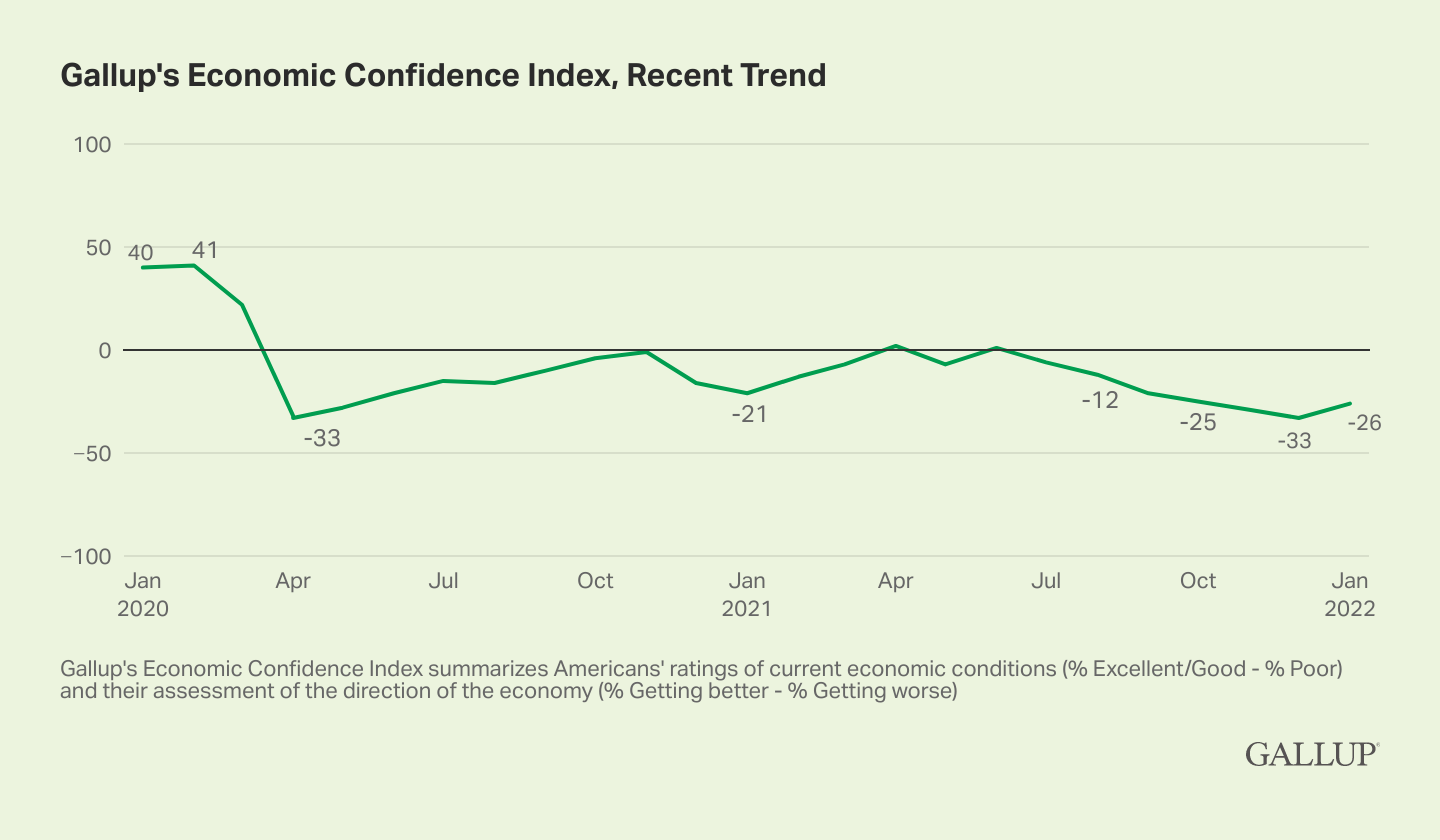 Line graph. Gallup's Economic Confidence Recent Trend. The index fell from +41 before the pandemic to -33 after it first began. Confidence began to improve reaching -1 in November 2020 before falling back in December and January. Confidence once again increased between February and June 2021 but has declined since then, hitting -33 again in December 2021, before improving to -26 in January 2022.

Americans' pessimism about the economy does not extend to their evaluation of the U.S. job market, which is among the best Gallup has measured since it began asking about job conditions in 2001. Currently, 72% say it is a good time to find a quality job, two percentage points below the high of 74% measured in October.

As recently as April, less than half of Americans said it was a good time for job seekers, and the percentage fell to as low as 22% early in the pandemic. Before the pandemic, Americans were nearly as positive as they are now, with the percentage saying it is a good time to find a quality job consistently at or above 65% from October 2018 through January 2020. Prior to January 2017, fewer than 50% rated the job market positively. 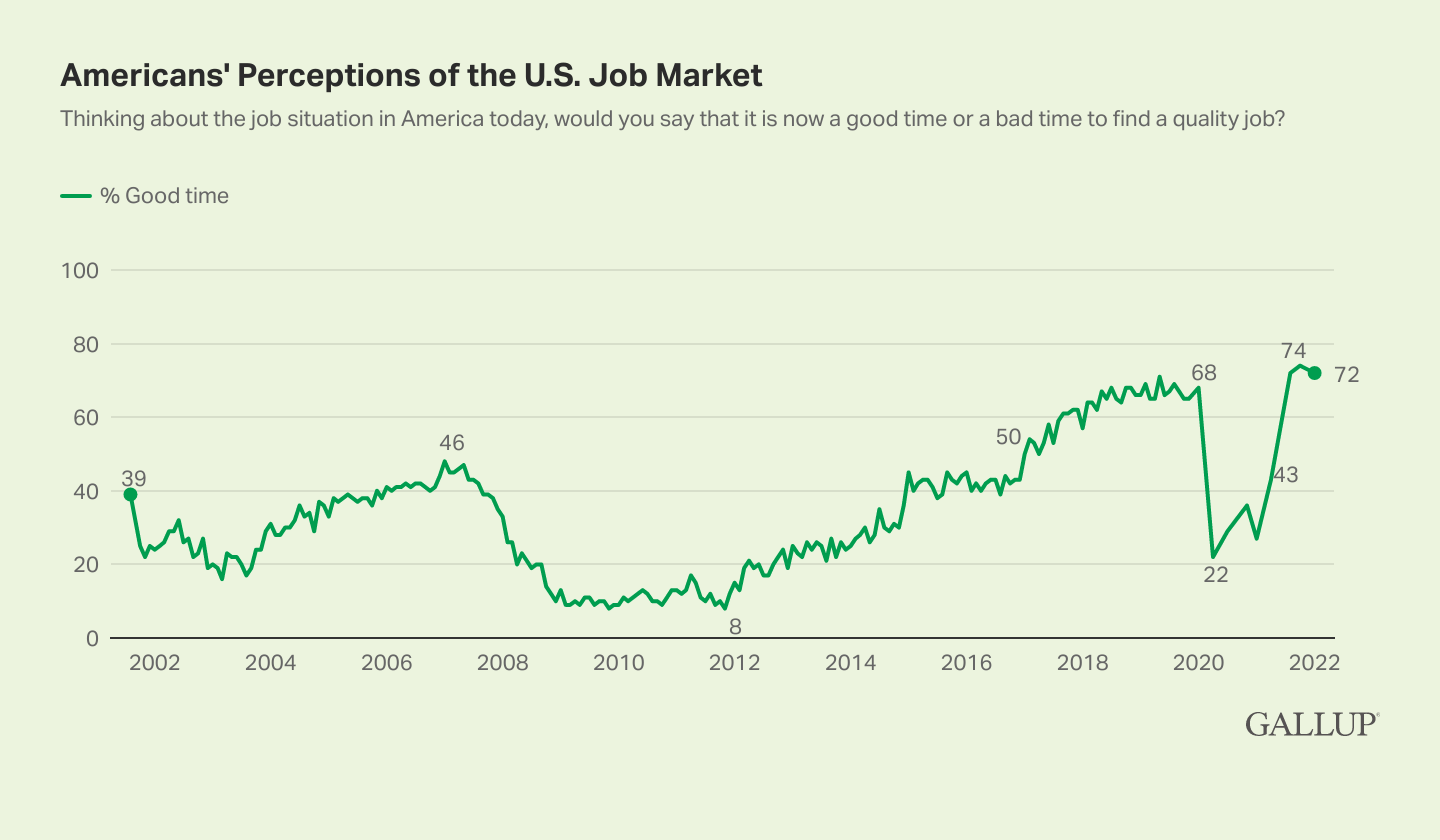 Americans have not had to deal with sharply rising inflation in decades, and the vast majority expect the price of goods to continue to go up for at least the next six months. Nevertheless, they remain generally optimistic about the stock market and unemployment, and arguably, economic growth. There is widespread consensus that interest rates will also go up.

About half of Americans say higher prices are harming their finances, although only about one in 10 say it is so severe that it is affecting their standard of living. Those most affected are disproportionately from lower-income households, the least able to absorb higher prices in their budgets.

Still, inflation is much less top of mind for Americans when asked to name the most important problem facing the country, although the percentage doing so is the highest it has been in nearly four decades. That percentage would likely continue to increase if inflation continues as most expect, and more Americans would likely report financial hardship from the effects of rising prices.

Results for this Gallup poll are based on telephone interviews conducted Jan. 3-16, 2022, with a random sample of 811 adults, aged 18 and older, living in all 50 U.S. states and the District of Columbia. For results based on the total sample of national adults, the margin of sampling error is ±4 percentage points at the 95% confidence level. All reported margins of sampling error include computed design effects for weighting.

Results for the question on whether rising prices have caused financial hardship are based on web interviews conducted Jan. 3-13, 2022, with 1,569 adult members of Gallup’s nationally representative, probability-based panel. For results based on the total sample of national adults, the margin of sampling error is ±3 percentage points at the 95% confidence level.