WASHINGTON, D.C. -- With inflation in the U.S. at its highest point since 1982, Americans' confidence in the economy has dropped to where it was in April 2020, when nationwide shutdowns brought on by the COVID-19 pandemic plunged the nation into a recession.

Concern about the economy, as evidenced by the increasing percentage of Americans who mention an economic issue as the most important problem in the U.S., is at its highest point of the pandemic. Meanwhile, satisfaction with the country's direction is lower than it has been since President Joe Biden's inauguration in January.

Gallup regularly tracks Americans' ratings of national economic conditions as excellent, good, only fair or poor, and whether they are getting better or worse. The combined responses are used to create the Gallup Economic Confidence Index (ECI), which has a theoretical range of +100 (if all respondents say the economy is excellent or good and that it is getting better) to -100 (if all say it is poor and getting worse).

In the latest Gallup poll, conducted Dec. 1-16, more than four in five U.S. adults rate current economic conditions in the country as only fair (40%) or poor (42%), and 67% say the economy is getting worse. The latest decline in confidence is owing largely to a six-point increase since November in the percentage of Americans rating the economy as poor.

The result is a -33 index reading, which reflects steady ticks downward since July as supply chain issues and the effects of inflation have increasingly plagued the U.S. While the -33 readings in 2020 and today are the worst since the Great Recession, they are far from the lowest on record, -72 in October 2008. 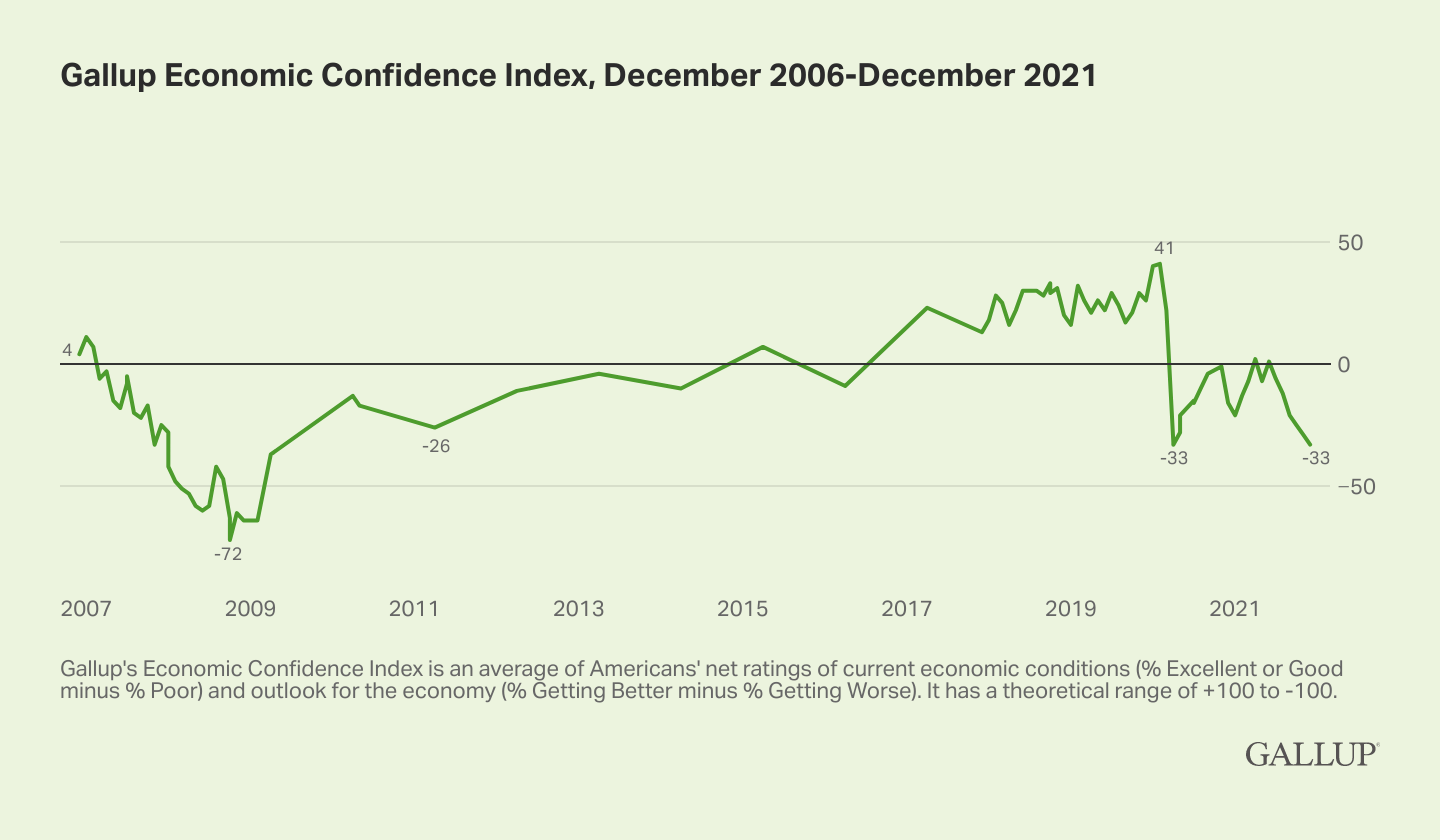 Line graph. Gallup's Economic Confidence Index since December 2006. The latest reading of -33 in December 2021 is down slightly from -29 in November. The current reading is the worst since April 2020 in the early weeks of the pandemic. Yet it is higher than the all-time-low -72 reading in October 2008.

Although the latest ECI reading is identical to the one from April 2020, the economic conditions that are likely influencing these assessments are different. At the start of the pandemic, record-high unemployment, uncertainty about the impact of the shutdowns, and the resulting recession likely influenced Americans' views of the economy at the start of the pandemic. Now that the unemployment rate has improved, inflation and the realization that occasional surges in coronavirus infections may continue to hamper the economic recovery are greater concerns.

Mentions of Economic Issues as Most Important Problem Tick Up

The percentage of U.S. adults who cite any economic concern as the country's most important problem has edged up three percentage points to 29%, the highest level in about five years. Still, this is well below the highs of 86% in February 2009 and 73% in March 1991, during economic recessions. 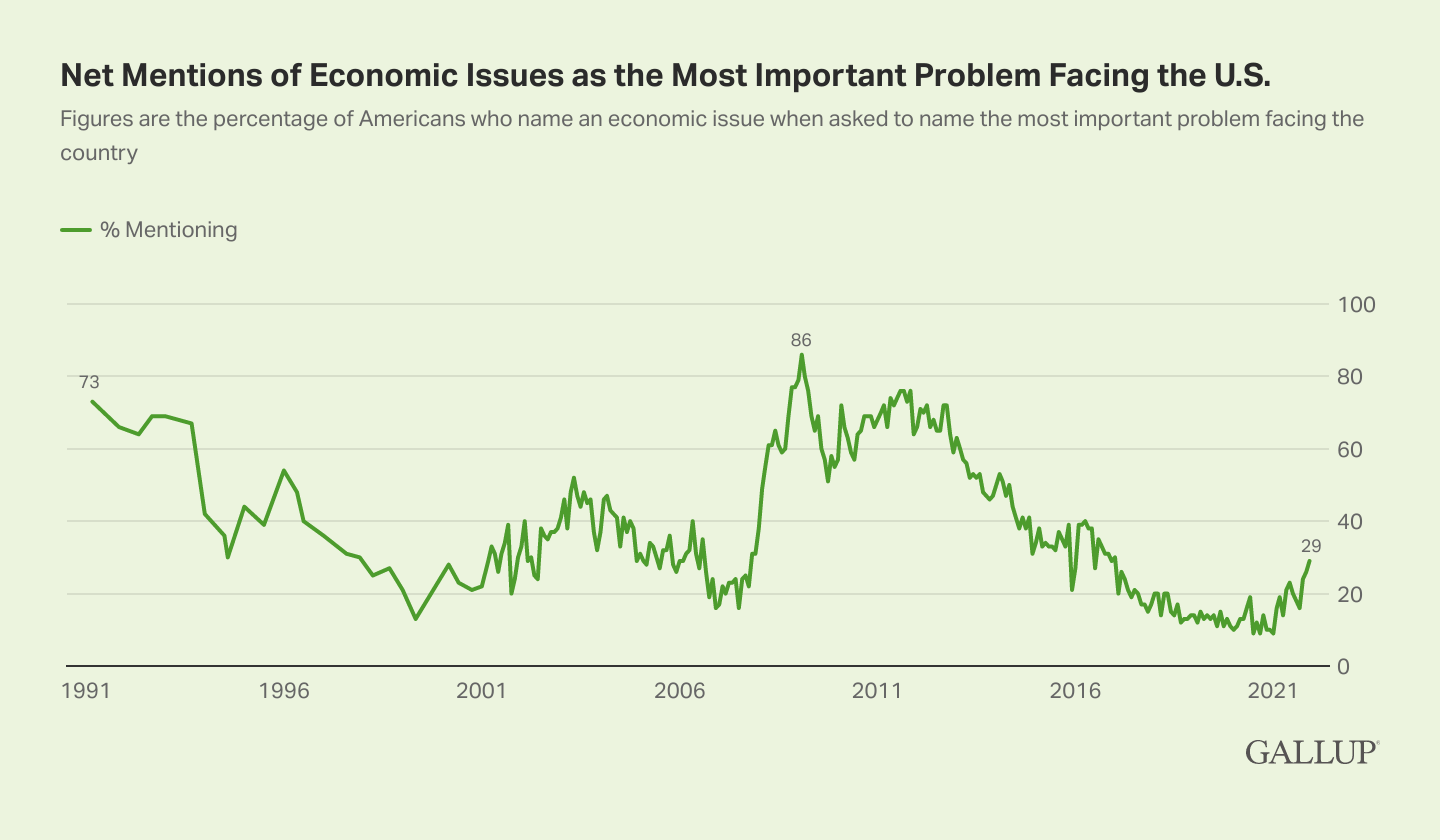 This net economic percentage includes mentions of the economy in general (11%), inflation (6%), the federal budget deficit (4%), unemployment (3%), and the gap between rich and poor (2%), as well as other economic issues. The percentage naming inflation as the most important problem is similar to those of the previous two months -- 7% in November and 5% in October -- but significantly higher than the 0%-2% figures earlier in 2021.

Citations of each specific economic issue fall short of the most-mentioned issue -- the government -- which a steady 21% of Americans say is the nation's top problem. Likewise, with 13% naming it, COVID-19 edges out any economic issue, while 7% mention immigration and 6% cite race relations.

Americans are increasingly dissatisfied with the direction of the nation. Currently, 21% are satisfied with the way things are going in the U.S., the lowest point of Biden's presidency so far. Still, this metric remains above the 11% reading measured shortly after protesters violently stormed the U.S. Capitol on Jan. 6. 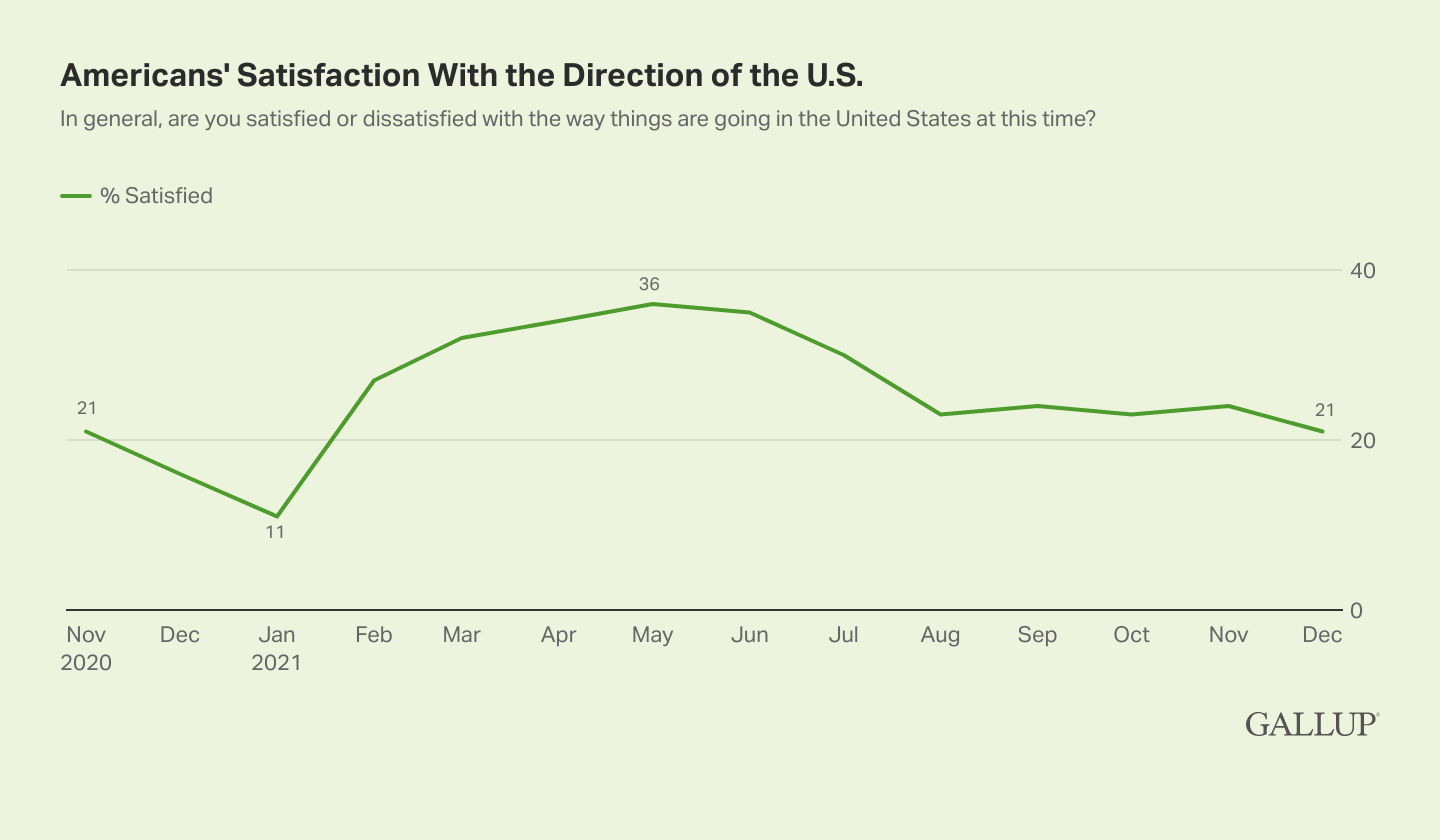 Line graph. Satisfaction with the direction of the U.S. among Americans since November 2020. The latest satisfaction rating of 21% on the metric is down from a high of 36% in May.

As 2021 comes to a close, morale is low in the U.S. COVID-19 continues to rage on, perceptions of the U.S. economy have worsened, Biden's job approval rating is slumping, and Americans' overall satisfaction with the direction of the country is low. Six months ago, the public was much more optimistic, but the delta and omicron variants of COVID-19, supply chain problems and rising inflation have dampened spirits. Still, jobless claims are down from their pandemic peak, and the stock market had been performing well until this week. However, uncertainty about how the coronavirus' omicron variant will affect the economy has spooked the market and may signal a weak end to the year.

Gallup's latest investor optimism poll finds investors pessimistic on several aspects of the economy while still upbeat about the stock market. The proposal for the IRS to monitor U.S. bank accounts is not well-received.