WASHINGTON, D.C. -- NATO and the U.S. on Wednesday rejected Russia's demand to roll back the alliance's presence in 14 Eastern European countries that became members after 1997. The idea likely would have gained little traction in those countries, where Russia's leadership has been highly unpopular since it annexed Crimea in 2014.

Since then, median approval across the mostly former Eastern bloc countries has never topped 30%, and disapproval has never dropped below 46%. In 2021, before the threat of a Russian invasion of Ukraine, nearly half (49%) disapproved. 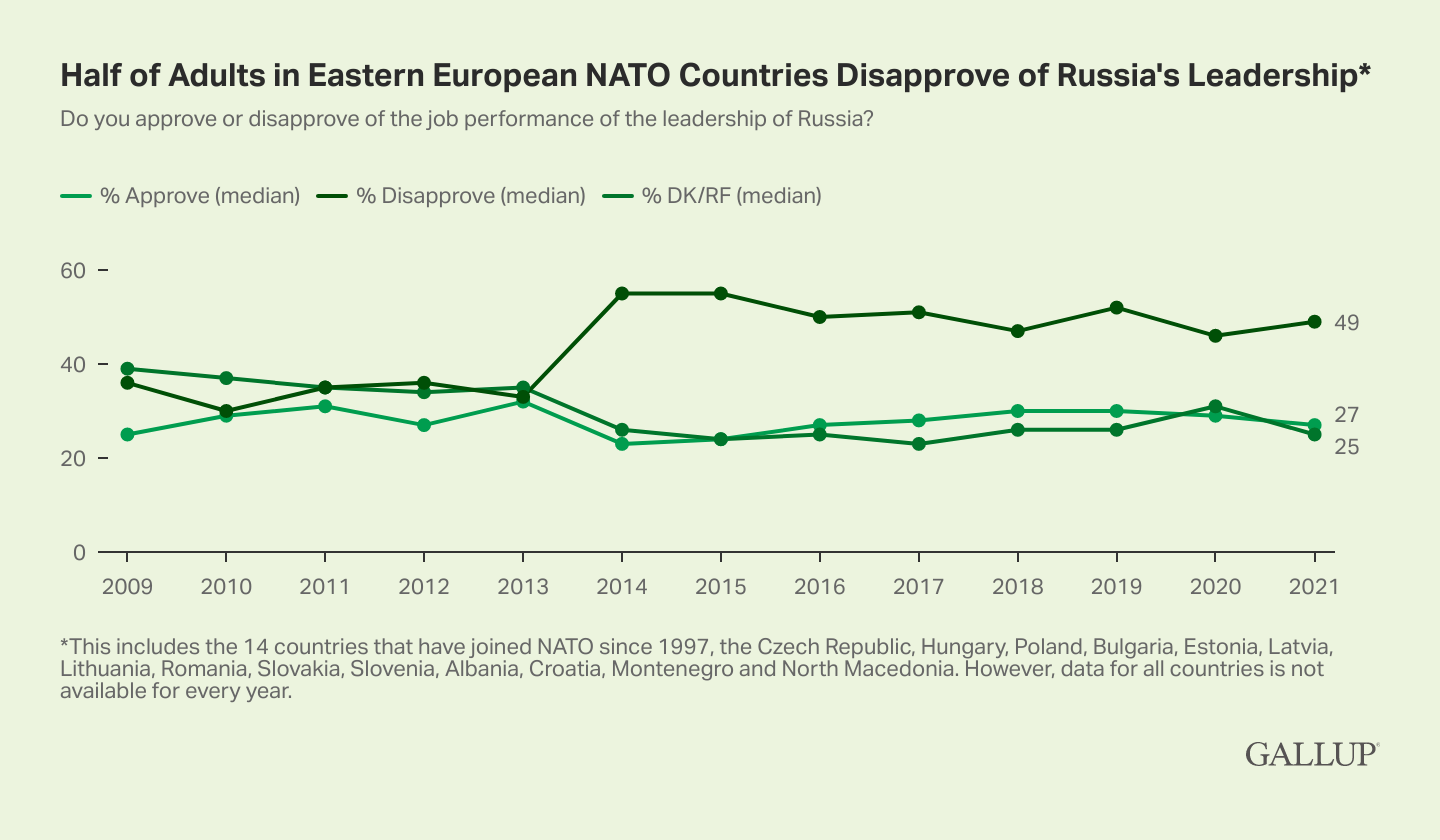 Line graph. Median levels of views of Russian leadership among NATO members in Eastern Europe. In 2021, a median 49% of the public disapproved of Russia's leadership, while a median 27% approved and 25% did not know or refused to answer.

The latest approval ratings of Russia come from surveys in Eastern Europe in 2021, mostly before the Russian government began massing large numbers of troops on the Ukrainian border in October 2021.

After nearly two months of heightened tensions between Russia and Ukraine and Ukraine's NATO allies, the Russian government issued a series of demands to deescalate the situation. Key among the demands was the withdrawal of NATO forces and equipment from any country that was part of NATO's enlargement since 1997.

From 2009 through 2013, levels of disproval for Russia's leadership had been substantially lower among NATO members in this region, not exceeding 36% median disapproval. However, disapproval shot up 22 percentage points in 2014 following Russia's annexation of Crimea early that year.

While there is a median of 49% disapproval for Russia's leadership across NATO members in Eastern Europe, it is not monolithic. Of the 13 Eastern European NATO members that Gallup was able to poll in 2021, seven are at or near majority-level disapproval for Russia's leadership. Those 13 countries include the Czech Republic, Hungary, Poland, Bulgaria, Estonia, Latvia, Lithuania, Romania, Slovakia, Slovenia, Albania, Croatia and North Macedonia.

Disapproval of Russia's leadership is highest in Poland, where 79% of adults disapproved in 2021. That level of disapproval is 28 points higher than it was in 2013 before the annexation of Crimea.

Current levels of disapproval are also particularly high in two of the three Baltic states, Estonia at 56% and Latvia at 49%. Disapproval in both countries is 10 and 11 points higher than in 2013, respectively. Estonia and Latvia -- and Lithuania -- have sent weapons to Ukraine to support the country against a potential Russian invasion.

In three of the largest Eastern European NATO member countries, disapproval of Russian leadership remains substantially below majority levels, with Hungary at 39%, Romania at 37% and Bulgaria at 33%.

Disapproval of Russia's leadership remains well above where it was before the annexation of Crimea. In both Hungary and Bulgaria, levels are 21 points higher in 2021 than in 2013, while in Romania, the level of disapproval is 10 points higher than where it previously stood.

After the fall of the Soviet Union, NATO expanded membership to many of the countries formerly in the Soviet sphere in Eastern Europe. The Russian government has consistently claimed that the presence of NATO forces in these countries is a threat to Russia's security and that the U.S. had previously pledged not to expand the alliance into the area.

Gallup has previously found that most NATO member countries in the region have seen the alliance as protection rather than the threat that Russia portrays, while those in former Russia and other former Soviet states outside of Eastern Europe were more likely to see it as a threat.

The Russian government would clearly like to remove or severely downgrade NATO's presence near its western border, and the country's most recent demands are aimed squarely at doing so. The demands were handed over to the U.S. government, suggesting that Russia sees the U.S. as the primary arbiter of NATO policy. While the U.S. arguably plays an outsized role in the alliance, other member countries retain a voice in their own defense and security policies.

Both the U.S. and NATO, in general, have rejected Russia's demands that forces and equipment be withdrawn from these countries. Current levels of disapproval for Russia's leadership among the Eastern European members of NATO strongly suggest these countries would support maintaining NATO's presence in Eastern Europe.

Ukraine: Few Takers for Vaccine Ahead of Surge

As coronavirus deaths hit record highs in Ukraine, officials are battling strong vaccine hesitancy. Sixty-three percent of unvaccinated Ukrainians say they do not plan to get the vaccine.