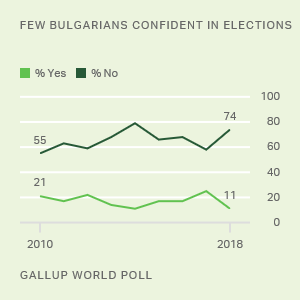 What if there was an election and nobody cared? Most Bulgarian voters do not have any confidence in the honesty of their elections.

More Than One in 10 "Suffering" Worldwide

Europeans Most Open to Those With Intellectual Disabilities

High Well-Being Eludes the Masses in Most Countries Worldwide

One in Three Britons Would Like to Leave the UK