WASHINGTON, D.C. -- While U.S. President Donald Trump, even as recently as January, referred to NATO as "obsolete," residents in many NATO member countries in Eastern Europe associate the alliance with the protection of their countries. This includes majorities in Poland, Estonia and Lithuania, where NATO allies, including the U.S., have recently sent troops to quell security concerns after Russia's actions in Ukraine.

The U.S. is a founding member of NATO, but its commitment to the alliance has been questioned after Trump publicly raised doubts about NATO's relevance and its funding before he took office. However, according to NATO, Trump agreed on Sunday to attend a meeting of NATO leaders in May, and he and NATO Secretary-General Jens Stoltenberg "reconfirmed the importance of the alliance in troubled times." And on Monday, Trump reaffirmed his support for NATO on a visit to the headquarters of the U.S. Central Command.

How the U.S. interacts with NATO has far-reaching consequences overseas, because many Eastern European countries count on NATO for protection. Last October, the United Kingdom sent 800 troops to Estonia. And shortly before President Barack Obama left the White House, the U.S. sent 4,000 troops to Poland to protect it and neighboring NATO allies Estonia, Lithuania and Latvia from perceived aggression from neighboring Russia. Kosovo, although not a NATO member, received military support from NATO during the Kosovo War between the former Yugoslavia and the Kosovo Liberation Army (KLA), and its residents overwhelmingly (90%) look at the alliance as protection. The same holds true for residents of NATO member Albania (70%) -- which also supported the ethnic Albanian KLA during the war. Similarly, it is not surprising that 64% of Serbians in 2016 view NATO as a threat and 6% see it as protection.

Russia, Countries in Russia's Sphere of Influence See NATO as a Threat

With NATO's inclusion of several post-Soviet states after the dissolution of the Soviet Union, and its rebuking of Russia's involvement in Ukraine, it is no surprise that Russia is at odds with NATO. Sixty-seven percent of Russians in 2016 view NATO as a threat, which is up 29 percentage points since 2012, and is the highest number that Gallup has recorded since it started tracking Russians' views on NATO in 2008. Residents of countries in Russia's sphere of influence that are not NATO members tend to share Russia's views on the alliance, if they have an opinion. Fifty-four percent of Belarusians view NATO as a threat, a 19-point jump from four years ago. Along with the Russians and Belarusians, more people in Ukraine (35%), Kazakhstan (31%), Kyrgyzstan (30%), Moldova (27%), Armenia (20%) and Tajikistan (34%) view NATO as a threat than as protection.

The proportion of residents of Ukraine -- a potential NATO member state until a few years ago -- who view NATO as a threat has increased in recent years after years of steady decline between 2008 and 2014. In 2014, after NATO sanctioned Russia after it annexed Crimea, Ukrainians for the first time were more likely to see NATO as protection (36%) than a threat (20%). However, the percentage viewing it as a threat shot back up to 35% in 2016 as the Ukrainian population has grown tired of the ongoing conflict between its military and Russian-backed separatists, as well as a poor economy and rising crime rates. Without a clear end in sight to the conflict, Ukrainians may be losing confidence in NATO's ability to help them in this crisis. Results are based on telephone interviews conducted throughout 2016 in the countries included in the analysis with a random sample of approximately 1,000 adults, aged 15 and older, living in each country. In Russia, the sample size was 2,000 adults. For results based on the total sample of national adults, the margin of sampling error ranges from ±2.7 percentage points to ±3.9 percentage points at the 95% confidence level. All reported margins of sampling error include computed design effects for weighting. 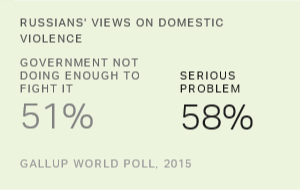 In EU member states in Eastern Europe, residents see Russia as the biggest threat to their countries; in non-member states, the U.S. is a bigger threat. Former Soviet states see threats from both countries.

Gallup Vault: Americans Bought Into NATO From the Get-Go

A year before NATO came into being, an April 1948 Gallup poll found broad and bipartisan U.S. support for a mutual defense pact between the United States and Western Europe.