WASHINGTON, D.C. -- Amid continued talk of a "new Cold War," residents of Eastern Europe and the Commonwealth of Independent States (CIS) see Russia -- or the U.S. -- as the one country that poses the biggest threat to them. But their answers largely depend on where Gallup asks the question. Russia poses the biggest threat in European Union member states in Eastern Europe, while in non-member states residents are more likely to perceive the U.S. as the biggest threat. In CIS countries, attitudes are mixed overall, but Russia and the U.S. are at the top of the list.

These results are based on Gallup surveys in summer 2015 as tensions escalated between the U.S. and its NATO allies and Russia over the situation in Ukraine and with Russia's involvement in Syria. On Wednesday, the Pentagon announced it had drawn up plans to position U.S. troops, tanks and other armored vehicles along NATO's eastern borders to "deter Russian aggression." In Eastern Europe, the unease over the situation is particularly evident in several NATO countries that were within the Soviet sphere of control during the Cold War. When asked to name the one country that poses the biggest threat to them, large percentages in Poland (69%), Estonia (58%), Romania (57%), Lithuania (46%) and Latvia (42%) spontaneously name Russia.

Greece stands out among its EU counterparts in the region, with residents identifying neither the U.S. nor Russia as the biggest threat -- and instead naming another EU member. Greeks see Germany (39%) as the biggest threat to their country. This likely reflects Greeks' anger toward Germany in relation to the austerity measures it required to help rescue Greece's ailing economy.

In non-EU member countries in Eastern Europe, residents are more likely to perceive the U.S. as a threat than Russia, but they are also likely to identify some of their neighbors or threats from outside the region. Residents in Albania and Kosovo, for example, are most likely to name Serbia -- with whom hostilities date back to before the Kosovo War. Serbians, on the other hand, see the biggest threat from the U.S., likely stemming from U.S. support of Kosovo.

The majority of Russians (64%) name the U.S. as the single greatest threat to their country -- this is the highest percentage to name the U.S. among all the countries where the question was asked. Notably, while 52% of Ukrainians perceive Russia as the biggest threat to them, just 5% of Russians see Ukraine as a threat. Interestingly, when Gallup asked Americans a similar question in February 2015 -- which one country is the greatest enemy of the U.S. today -- Russia (18%) edged out mentions of North Korea (15%). The country made the top of the list again in 2016 with 15% of Americans mentioning Russia.

"ISIS" Earns Mentions in Some Countries

Although not a country, sizable percentages of residents in several countries mentioned the Islamic State group or "ISIS" as a top threat. As many as 15% in Tajikistan and Albania mentioned the group, and 5% or more mentioned it in Kazakhstan (9%), Czech Republic (8%), Bulgaria (6%) and Moldova (5%). In the U.S. in February 2015, 4% of Americans named countries where the Islamic State operates as the greatest enemy.

More than two decades after the end of the Cold War, the region is divided again along eerily familiar lines, with countries aligning with the U.S. and the West on one side and Russia on the other. At the same time, Russia has fewer countries within its sphere of influence than it did then. However, residents living in countries that were once within that sphere are clearly concerned about the potential threat that Russia poses now.

Results are based on face-to-face interviews with 1,000 adults in each country (2,000 in Russia), aged 15 and older, conducted in June to September 2015. For results based on the total sample of national adults, the margin of sampling error ranged from ±2.8 percentage points to ±3.4 percentage points. The margin of error reflects the influence of data weighting. In addition to sampling error, question wording and practical difficulties in conducting surveys can introduce error or bias into the findings of public opinion polls. 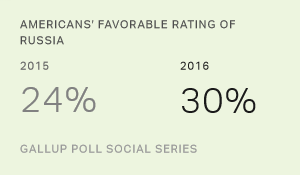