WASHINGTON, D.C. -- Sri Lankans' outlook on their economy turned pessimistic for the first time in 2021, presaging the country's worst economic crisis in over 70 years. And, as their economy headed for free fall, Sri Lankans' confidence in their national government evaporated almost overnight. Both trends do not bode well for the Rajapaksa family that has been in power in Sri Lanka for most of the past two decades.

For weeks without incident, thousands of Sri Lankans have taken to the streets to protest the economic crisis and to call for the resignation of President Gotabaya Rajapaksa, whom they blame for mismanaging the economy during the pandemic. Although Rajapaksa has admitted to making some mistakes, so far, he and his brother, Prime Minister Mahinda Rajapaksa, have resisted calls to step down.

Last week's shooting took place as Sri Lanka is seeking emergency financial help from the World Bank and International Monetary Fund to help it pay for imports of food, fuel and medicine. The country also announced two weeks ago that it would default on more than $50 billion in foreign debt.

Sri Lankans' Outlook for Economy Turns Grim: For the first time in the history of Gallup polling in Sri Lanka, Sri Lankans in 2021 were more pessimistic than optimistic about the direction of their local economy. In the first round of three surveys that started in October, a new low of 40% said their economy was getting better and 48% said it was getting worse.

Confidence in National Government Tumbles to Record Low: Until 2021, Sri Lankans' confidence in their national government had never fallen below a majority, but this faith was tested last year. In the first survey, which started in October, a record-low 50% of Sri Lankans expressed confidence.

However, in the next two surveys, confidence tumbled even further -- and by the end of the year, the majority of Sri Lankans did not have confidence in their national government.

Implications: Before food and oil prices increased in the wake of the Ukraine war, Sri Lankans saw their country headed for a crisis. Although President Rajapaksa removed several family members from his Cabinet to appease protesters and Prime Minister Rajapaksa proposed changing the constitution to clip presidential powers, these moves will likely hold little sway in the wake of the police shootings that have reignited widespread protests across Sri Lanka.

Results based on multiple waves of mobile telephone interviews with approximately 1,000 Sri Lankans, aged 15 and older, in each wave between October and December 2022.

For results based on the total sample of national adults, the margin of sampling error is ±4.7 percentage points at the 95% confidence level. 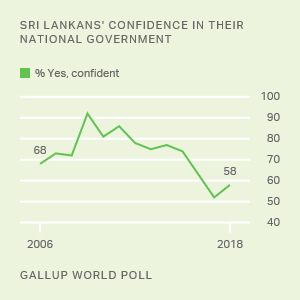 Sri Lankans' confidence in their national government was already slipping ahead of the deadly Easter Sunday church bombings.

Growth in Sri Lanka's economy is well below where it was last year -- down from 6% in 2008 to a projected 3.5% for 2009 -- but economic optimism and confidence in national institutions is rising. Likely driving this positivity is Sri Lankans' expectation that things will improve now that the war is over.

More Sri Lankans are suffering today than before their civil war ended in 2009. Despite the country's recent economic growth, more Sri Lankans than ever before are struggling to afford basics such as food and adequate shelter.