WASHINGTON, D.C. -- The percentage of Americans who evaluate their lives poorly enough to be considered "suffering" on Gallup's Life Evaluation Index was 5.6% in July, the highest since the index's inception in 2008. This exceeds the previous high of 4.8% measured in April and is statistically higher than all prior estimates in the COVID-19 era. Across extensive measurement since January 2008, the suffering percentage has reached 4.5% or higher on a handful of occasions.

For its Life Evaluation Index, Gallup classifies Americans as "thriving," "struggling" or "suffering," according to how they rate their current and future lives on a ladder scale with steps numbered from 0 to 10, based on the Cantril Self-Anchoring Striving Scale. Those who rate both their current and future lives a 4 or lower are classified as suffering. Those who rate their current life a 7 or higher and their anticipated life in five years an 8 or higher are classified as thriving.

The percentage of U.S. adults estimated to be thriving has steadily declined since it reached a record high of 59.2% in June 2021. The latest estimate of 51.2% is an 18-month low. The lowest recorded thriving rate of 46.4% was measured twice -- first, in November 2008 amid the Great Recession, and second, in late April 2020, during the initial economic shutdown associated with the outbreak of COVID-19 in the U.S. 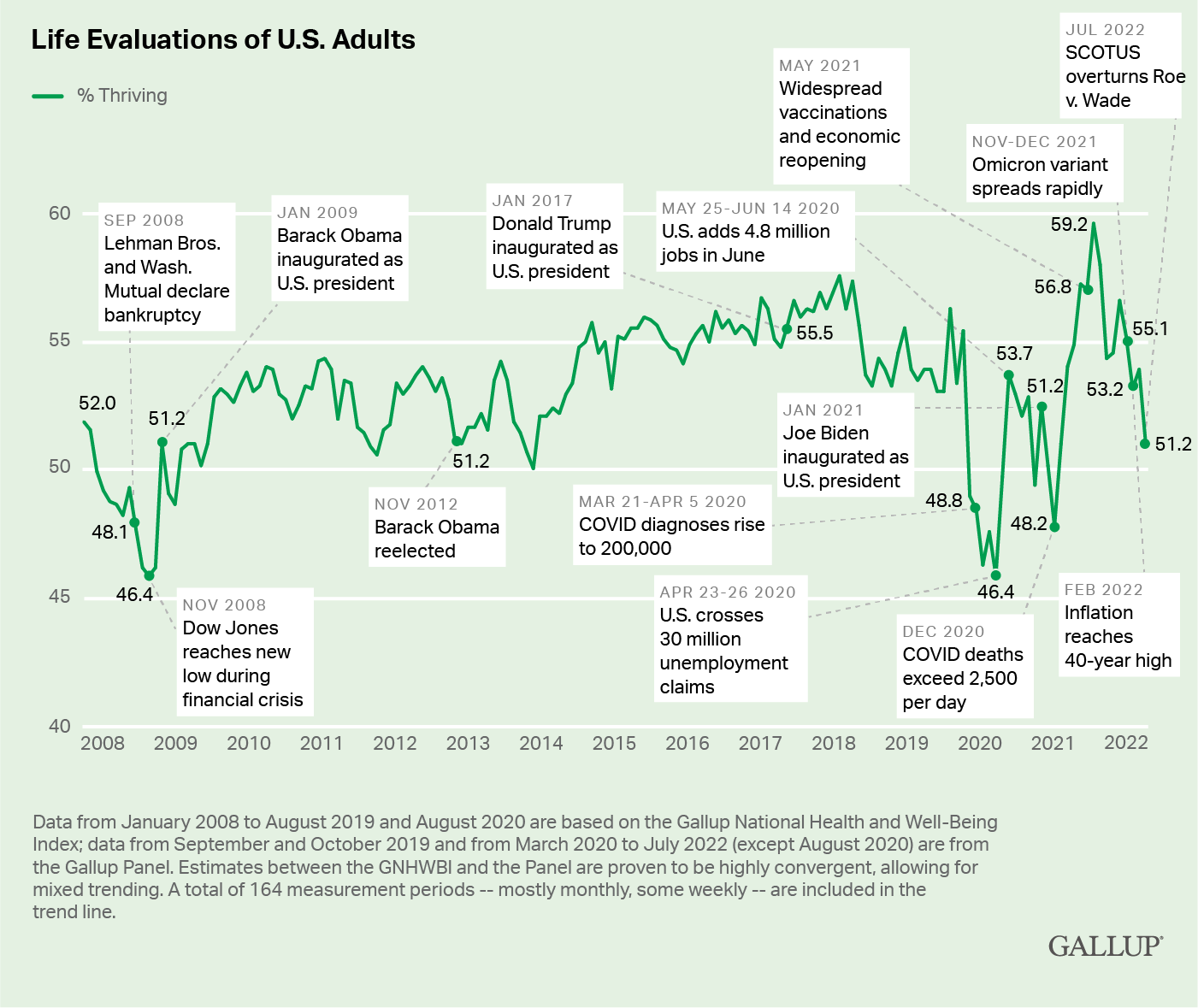 Suffering Rate Has Doubled Among Republicans Since June 2021

Suffering rates have notably climbed in recent months for Democrats, Republicans and independents alike. Since June 2021 -- the highest point for the Life Evaluation Index among all Americans -- the proportion who are suffering has doubled among Republicans, to 5.4%. Among Democrats, it has also jumped to 5.4% -- nearly double the 2.9% from a year ago. And independents were near 5% suffering before a significant increase to 7.3% in April 2022, which eased only slightly to 6.2% in July.

The movement in the suffering percentage is much more consistent across the three groups than the changes measured in the thriving percentage, which has declined much more for Republicans than their counterparts since June 2021. In July 2022, 53.0% of Democrats were classified as thriving, compared with 52.2% of Republicans and 47.7% of independents.

Daily Stress and Worry Climb Higher Than One Year Ago

In addition to general life ratings, Gallup tracks whether Americans have recently experienced specific emotions in their daily lives, including stress and worry.

The spikes Gallup measured in March 2020 were about four times greater than the increases seen in 2008 as a result of the Great Recession.

Since reaching a record high in June 2021, life ratings among American adults have steadily worsened. The 5.6% suffering rate in July marks the first time the Gallup measure has exceeded 5% in the U.S. and translates to an estimated 14 million American adults.

Economic conditions are likely a major contributing factor to these worsening scores. Despite the addition of 528,000 new jobs in July, persistently high inflation is creating a drag on the Gallup Economic Confidence Index, which is now at its lowest point since the Great Recession in 2009. And even though the Consumer Price Index eased to 8.5% in July -- triggering relief among many investors -- inflation remains near a 40-year high and is the problem Americans cite most often today in an open-ended question. The practical consequences of inflation, too, are substantial, with an estimated 98 million Americans cutting spending on healthcare or routine household expenses as a result of rising healthcare costs.

Dovetailing with economic headwinds is a rising discontentment with U.S. moral values, which has reached a record high, with 50% of Americans reporting the state of moral values is "poor" and 37% "only fair," a sentiment that could be negatively influencing life ratings generally.

Learn more about this topic in Blind Spot: The Global Rise of Unhappiness and How Leaders Missed It.

Results from the most recent survey, conducted from July 26-Aug. 2, 2022, are based on responses from 3,649 adults, aged 18 and older, living in all 50 U.S. states and the District of Columbia as a part of the Gallup Panel. For results based on this sample of national adults, the margin of sampling error is about +2.0 percentage points for percentages around 50% and about +1.2 percentage points for percentages near 10% or 90% at the 95% confidence level, design effect included.

Results from July 31 to Sept. 3, 2020, are based on a survey conducted by mail and web as a part of the Gallup National Health and Well-Being Index, with a random sample of 2,321 adults, living in all 50 U.S. states and the District of Columbia.

Samples are weighted to correct for unequal selection probability, non-response, and double coverage of landline and cell users in the two sampling frames. They are also weighted to match the national demographics of gender, age, race, Hispanic ethnicity, education, region, population density, and phone status (cellphone only/landline only/both and cellphone mostly). Demographic weighting targets are based on the March 2019 Current Population Survey figures for the aged 18 and older U.S. population. Population density targets are based on the 2010 census. All reported margins of sampling error include the computed design effects for weighting.

The means of data collection (e.g., mail/web versus phone) can result in differing estimates for some metrics in randomized large population polling. Gallup has extensively studied these effects and has determined that the Life Evaluation thriving and suffering percentages are comparable across modes, thus effectively preserving past trending without need for an adjustment due to the change in the means of data collection.