Seventy years ago today, on Nov. 29, 1947, the United Nations voted to end the British Mandate in Palestine that had existed since 1922 and to divide the land into eight sections. Three sections were to form the basis of an Arab state, and another three were designated for a Jewish state. The seventh section, the town of Jaffa, was to be shared by both peoples, and Jerusalem was to be administered by the U.N. as an international regime. Leading up to this vote, 65% of Americans said they favored the U.N. plan to divide Palestine into two states, "one for the Arabs and one for the Jews."

Notably, only 10% of Americans opposed the U.N. plan for partitioning Palestine -- the description of which in Gallup's question also included the specification that it would permit 150,000 Jews (mostly those fleeing Europe and Russia after World War II) to move to the Jewish state. Twenty-five percent had no opinion on the matter.

According to the original Gallup release, support for the partition was equally high among Republicans and Democrats. The plan also received nearly the same levels of approval from college-educated as well as non-college-educated adults.

The transition wasn't expected to be peaceful, however. The 1947 Gallup poll reflected this, asking Americans whether the U.S. should send troops to help quell violence in the event war broke out between the Arabs and Jews, or whether this should be deferred to a volunteer U.N. army. Only 3% of Americans favored sending U.S. troops, while 65% said U.N. forces should handle things and 18% said neither should commit troops.

View the original 1947 Gallup news release on the partition of Palestine.

Read more about Gallup's polling on Israel and the Palestinians. 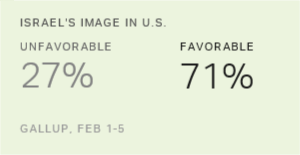 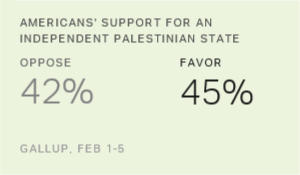 Americans' support for Palestinian statehood is more tepid than usual. Most still sympathize with Israel over the Palestinians.

Gallup Vault: Anwar Sadat Liked in U.S. Before His Death