For banks, baby boomers stand out among generations as highly attractive and lucrative customers.

Fully half of baby boomers report over $100,000 in investable personal assets, compared with 37% of Generation Xers and 14% of millennials. Nearly one in five boomers are even more well off, with over half a million dollars in investable assets, and 37% report having more than $50,000 in deposits at their banks. What makes boomers particularly valuable as customers is that they're actively borrowing, spending and investing their wealth, which means they're looking for financial services that meet their needs.

Just One in Three Boomers Are Fully Engaged With Their Bank

Banks would have much to gain if they could convince baby boomers to consolidate their accounts with them. Gallup's study of customer engagement among boomers, though, suggests that banks must overcome considerable customer indifference if they want to capitalize on these relationships. Not all boomers hate their banks; one in three are fully engaged with their primary banking provider. But two in 10 are actively disengaged, and nearly half (46%) are indifferent toward their primary financial institution.

To win more business with baby boomers, banks must resist the temptation to simply sink money into costly technology or short-term promotions. These tactics may temporarily woo new customers, but they're unlikely to foster a long-term emotional connection. Instead, banks must emotionally engage their boomer customers -- an approach more likely to gain customers who will stick around, recommend the bank to their family and friends and consolidate their high-value services there. These customers are also more likely to respond to cross-sell efforts, use additional products and build up their balances.

What Banks Can Do to Engage Boomers

Engaging customers is a proven strategy banks can use to differentiate themselves in the marketplace and attract more high-value accounts, but to get there, most will need to rethink their approach. Here are some tactics banks can use to win new boomer customers and score more business from existing ones:

Almost two-thirds of baby boomer customers overall tell Gallup that they're likely to continue doing business with their primary bank, a much higher overall percentage than among Generation Xers (53%) or millennials (54%). Though this is encouraging news, engaging customers could boost that percentage significantly: Gallup analysis shows that nine out of 10 fully engaged customers would continue doing business with their primary bank. In stark contrast, that percentage plummets to less than two in 10 among actively disengaged customers, reinforcing just how essential engagement is in building and maintaining lasting customer relationships.

Fully engaged customers have more products with their primary banks. For this reason, banks that successfully engage their baby boomer customers will win their hearts and more of their banking business.

Sean Williams, Ph.D., is a Senior Practice Consultant at Gallup.

Sales and service are the same thing. There -- I said it. But more often than not, what we hear during morning huddles is more like this: "We still need three home equity applications this week, two more credit cards, and two more checking accounts. 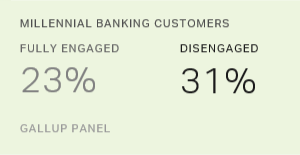