Half of U.S. employees are watching the job market or actively looking for a job, based on findings from a new Gallup Workforce Panel study. This is a major problem for companies, as workers job hopping from one organization to the next can create considerable costs for employers. Job hopping also affects employee engagement in complex ways, which has significant implications for workers and companies.

Job hopping can give employees the chance to expand their knowledge, develop their talents, increase their network and boost their salary. According to an article published in Forbes, job hoppers typically leave a company for a lateral move or promotion.

To learn more about what drives job-hopping, Gallup asked U.S. workers who were considering a job change or who had recently switched employers to indicate how important particular factors were when deciding to take a job with a different company. For workers who had switched jobs in the past three months, increased income ranked third and career development ranked fifth on the list.

The crucial finding, though, was the top-ranked reason for considering or taking a new job. When U.S. workers are seeking new jobs, they want to do what they do best, Gallup found. 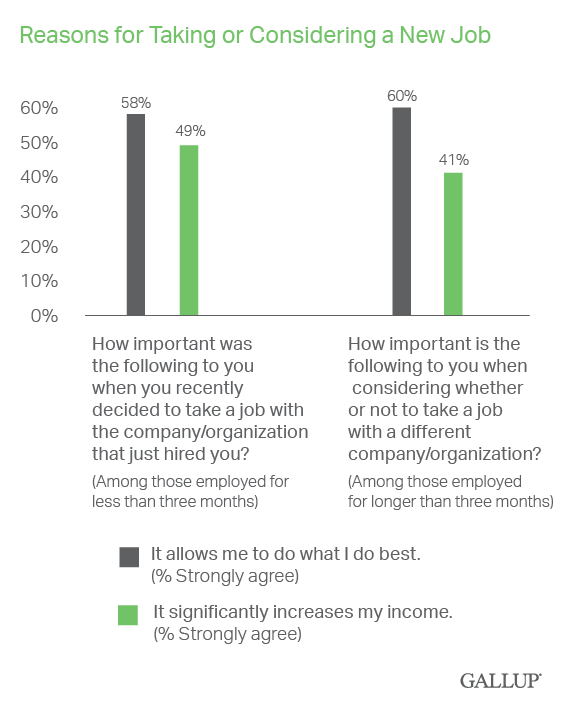 Benefits of Job Hopping to Employees

For workers and companies wondering whether job hopping results increase employee engagement, the answer is complex.

During the honeymoon period, more employees who have worked at a company for less than three years strongly agree that they have had opportunities to learn and grow, that someone at work has talked to them about their progress and that someone at work encourages their development than employees who have been with a company for 10 years or more. Clearly, companies seem to focus more on fostering the development of newly hired employees than their longer-tenured workers.

These findings reveal a major disconnect between companies and their employees. If workers are switching jobs and companies because they think a new role will allow them to do what they do best, yet they have fewer opportunities to do so in their new role than their more-tenured counterparts, employers are at a continued risk that workers will keep looking for a new role. Few workers may be willing to stick it out for three years when their opportunities to do what they do best seem to increase.

What Companies Can Do

After the honeymoon period, overall employee engagement dips significantly for workers under the 10-year mark, Gallup analysis shows. But there are effective strategies companies can use to reverse that trend. They can nurture employees' strengths during the honeymoon period, focus on development for long-term employees and help all employees know what's expected of them at work, regardless of how long they've been in their role.

Cultivate employee strengths early on in their career. New employees need to spend a certain amount of time learning the fundamentals of their role. To retain new workers and get them off to a fast start, look for ways to help them apply their strengths early in their careers, and select managers who have the talent to identify and maximize their team members' talents.

Don't take your long-term employees for granted. Gallup's findings reveal that longer-term employees do not feel as supported as employees who are new to a company. Companies need to find ways to create learning opportunities and provide feedback to retain and engage top-level employees throughout their time at the organization.

Help employees know their expectations at work, especially those new to the job. Talking about expectations requires more than just handing employees a list of job duties. Expectations also include knowing how to prioritize responsibilities and how those responsibilities connect with other jobs in the company. Knowing what's expected is also an understanding of how what one employee does fits in with what everyone else in the department and on the team is supposed to do.

Sangeeta Agrawal contributed to the research in this article.

Results are based on a Gallup Panel Web study completed by 13,008 U.S. adults, aged 18 and older, conducted Dec. 2, 2014-Jan. 14, 2015. The Gallup Panel is a probability-based longitudinal panel of U.S. adults who are selected using random-digit-dial (RDD) phone interviews that cover landline and cellphones. Address-based sampling methods are also used to recruit panel members. The Gallup Panel is not an opt-in panel, and members are not given incentives for participating. The sample for this study was weighted to be demographically representative of the U.S. adult population using Current Population Survey figures. For results based on this sample, one can say that the maximum margin of sampling error is ±1 percentage point at the 95% confidence level. Margins of error are higher for subsamples. In addition to sampling error, question wording and practical difficulties in conducting surveys can introduce error and bias into the findings of public opinion polls.