Communities with the greatest investment in supporting active lifestyles yield residents who do significantly better in key aspects of well-being.

For this report, Gallup and Healthways created an Active Living Score for 48 medium to large Metropolitan Statistical Areas (MSAs) across the U.S. by analyzing metropolitan infrastructure data -- including walkability, bike-ability, transit infrastructure and park infrastructure -- based on each community's Walkscore® and ParkScore®. Scores for all four active living metrics were required for each MSA to be included in this analysis.

The New York City and Boston metropolitan areas are the top two communities for both walkability and transit. Madison, Wisconsin, and Portland, Oregon, have the highest bike scores, while Minneapolis and Washington, D.C., have the highest park scores.

The four active living metrics examined in this analysis collectively provide powerful insight into a community's results in key aspects of well-being. But each component of active living influences various well-being metrics differently.

For example, while all four active living metrics have strong negative correlations with obesity and diabetes rates, Bike Score and Park Score have stronger relationships with those two conditions than do the other two metrics. Bike Score and, to a lesser extent, Park Score are also the principal forces behind a lower likelihood of high blood pressure and heart attack incidents, along with reduced smoking rates.

Transit Score and Walk Score gain greater prominence in other aspects of well-being. Transit Score is the only one of the four metrics to have a strong relationship with reduced rates of depression, while Walk Score has the strongest correlation with feeling that housing in the community is ideal. This underscores the relationship between walkability and attitudes toward the quality of available housing.

Leadership Is Key to Enhancing Active Living in Communities

Communities that invest in the right infrastructure will increase their chances of having more active citizens. Leaders play a significant role in the shape, structure and culture of the communities they serve, but involvement of the entire community -- from restaurants, schools, grocery stores and employers to residents themselves -- is critical to improving the well-being of all who live there.

Many cities are pursuing opportunities to improve their infrastructure to increase the chances that their residents will live active lives.

Dan Buettner, National Geographic Fellow and founder of Healthways' Blue Zones Project, notes, "There are tangible policies that communities can adopt to actively cultivate and improve residents' well-being. Policies that nudge people into healthy activities -- where it is easy to walk to the store, bike to a friend's house, get access to fresh produce and be surrounded by healthy-minded, supportive friends -- are ones that make the healthy choice the easy choice. Sustained transformation depends on building an environment and establishing social policies that support and reinforce these programs."

With this in mind, active living communities can lead the nation in how we think about, discuss and make lasting changes to enhance well-being. 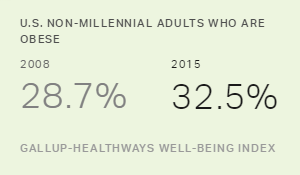 Social offerings, openness, aesthetics, and education are the most likely elements to affect residents' attachment to a community, according to a three-year study conducted by Gallup for the John S. and James L. Knight Foundation.