The top reason students cite for going to college is to get a good job. To meet their needs, colleges and universities have been redesigning their curricula and creating initiatives to develop their students both personally and professionally.

These types of initiatives have enormous potential to improve student outcomes. Research from the Gallup-Purdue Index shows that student experiences such as having supportive relationships with faculty and mentors, working on long-term projects, obtaining relevant internships and being involved in extracurricular activities are strongly linked to higher well-being and better workplace outcomes. They are also closely tied to alumni perceptions of college value and feelings of preparedness for life outside of college.

While efforts to encourage these critical experiences are important, they are not enough. Gallup has discovered that another key attitude is linked to these important outcomes: perceptions of academic rigor.

Perceptions of Academic Rigor Differ by Institutional and Student Characteristics

Overall, 42% of college graduates nationally strongly agree that they were challenged academically. However, alumni perceptions of academic rigor vary widely by the type of institution they attended and what their major was.

Colleges Should Supplement -- Not Replace -- Academics With Experiences

Colleges and universities have focused on redefining their mission and demonstrating the value of the education they offer by including experiences that personally and professionally develop their students. Yet, as colleges focus on providing these experiences, they should not forget that academics still matter. These personal and professional experiences should supplement -- not replace -- the rigor of an institution's academic programs.

Among alumni who have all six of Gallup's high-impact experiences but were not academically challenged, just over half strongly agree that they were prepared well for life outside of college and that their education was worth the cost. But for alumni who had all six experiences and were academically challenged, this figure spikes to more than eight in 10.

Faced with the national trend of grade inflation, higher-education institutions should focus on challenging students academically rather than boosting their grades to improve the short-term outcomes of job placement or graduate admissions. In the long run, alumni who were challenged academically are more likely to say they were prepared for life outside of college and that their education was worth the cost. 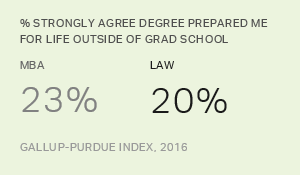 MBA and law degree holders are less likely than other postgraduates to say their degree prepared them well or believe their education was worth the cost.