WASHINGTON, D.C. -- Look for a three-article series this week on gallup.com focusing on Gallup's long-standing LGBT trends. These analyses are based on the latest annual Values and Beliefs survey, conducted May 1-10, as well as an aggregated sample of interviews conducted in 2017. The results reflect a society that has grown more socially liberal in its outlook, including on several LGBT-related issues.

Already this year, Gallup data have shown that a majority of Americans (56%) are satisfied with the acceptance of gays and lesbians in the U.S., while the percentage favoring broader acceptance has inched up. Acceptance of gays is bipartisan, with the percentage satisfied roughly the same across all political groups, including 57% of Republicans and 55% of both independents and Democrats expressing satisfaction.

Stay tuned this week for the following new findings: 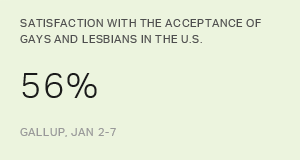 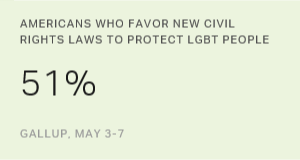 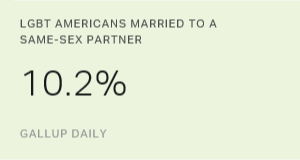