It's not difficult to view abortion as a contentious issue. With equal percentages of Americans -- 48% each -- identifying themselves as "pro-choice" and "pro-life" in Gallup's May 2018 update on abortion, the country looks to be completely polarized on the matter.

The two sides also diverge when it comes to the legality of first-trimester abortions. Nine in 10 pro-choice Americans say abortion should generally be legal in the first three months of pregnancy, while six in 10 pro-life Americans believe it should be illegal.

At the same time, there are two important areas of consensus that have typically been respected in U.S. abortion laws. One involves protecting abortion rights when pregnancy endangers a woman's life. The other is keeping abortion legal when pregnancy is caused by rape or incest.

According to Gallup's 2018 abortion survey, not only do most Americans as a whole favor these protections, but so do majorities of pro-life Americans -- 71% for the endangered woman's life exception and 57% for cases of rape or incest. Support for these allowances is nearly universal among pro-choice Americans.

The general agreement seen on woman's life and rape/incest protections contrasts with a much thornier picture relative to the laws on abortion in cases when the child would be physically or mentally disabled or at the woman's discretion. These spark much stronger differences between pro-choice and pro-life Americans, and are usually where conflict erupts in the debate.

Americans' Views on Abortion Are Complex, yet Clear

Somewhere between NARAL Pro-Choice America and National Right to Life lies a nuanced view of abortion, which is where the largest segment of Americans reside. Fifty percent of Americans in Gallup's May 2018 update on abortion views said abortion should be "legal only under certain circumstances." The rest were divided between those saying it should be legal in all cases (29%) and those in favor of it being illegal in all cases (18%).

Even with this question, shades of gray tend to blur the bright lines separating so-called partisans on abortion. Barely half of pro-choice Americans think abortion should be legal in all cases, while four in 10 favor it in only certain circumstances. Only a third of pro-life Americans think abortion should be illegal in all cases, while the majority take the middle position.

The anti-abortion bill recently passed in the Alabama Senate and awaiting Gov. Kay Ivey's signature would outlaw all abortions at all stages of pregnancy, except those determined necessary to save the life of the mother. That may technically fit within the "only under certain circumstances" framework that 50% of Americans and 59% of pro-life Americans say they support. However, by excluding a provision that would also allow pregnancies caused by rape or incest to be terminated, the Alabama bill falls outside the views of most Americans.

The bill is reportedly designed to directly challenge Roe v. Wade, but it may also test the bounds of public tolerance for abortion laws that don't exactly square with Americans' own beliefs.

A more detailed review of national views on the legality of abortion in each trimester appears in this 2018 article, and for Gallup's full analysis of public opinion on abortion, visit the Abortion topic page. 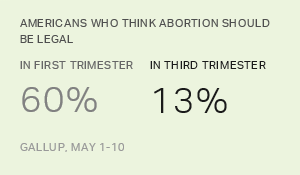 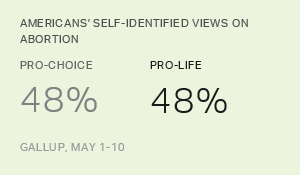