Average Americans have had many opportunities to learn where the candidates stand on the issues this year. These include the extraordinary series of 10 Republican and six Democratic debates held to date, along with town hall meetings, massively detailed positions on a wide variety of issues on candidates' websites, and candidates' speeches and interviews.

Out of all of this, the question remains: Do average Americans out there, who are taking all of this in, believe that the candidates have come up with good ideas for solving the issues that Americans care about?

This is a key question. The fundamental purpose of presidential elections is to put into office an individual who will, in essence, serve as the representative of and conduit for the wishes, priorities and desires of the average people of the nation -- the people whom the president represents. If Americans believe that no candidate has come up with good ideas for addressing the problems that they -- the American people -- believe are most important, then the president-to-people connection isn't working well. And the results of the election are not going to engender a great deal of faith or support from the people.

In November, and again in January and February, we asked Americans, just after they told us what they consider to be the most important problem facing the nation, whether they think any of the presidential candidates have come up with good ideas for solving that problem or not.

A little more than half of Americans -- 52% -- said yes in February. That's up slightly from January and November. Forty percent say "no," and the rest say they don't know.

It's hard to argue that 52% is a reassuring number. A significant segment of Americans, it appears, are cynical about what the candidates are proposing, or perhaps they simply aren't paying much attention. (We don't have this question from previous elections, so we are not able to put it in historical context.)

These views vary quite a bit by partisanship, and this becomes a significant finding. Republicans are more positive than Democrats. To be specific, 65% of Republicans say a candidate has come up with good ideas for solving the most important problem facing the nation, compared with 45% of independents and 49% of Democrats. Plus, our data show that Republicans are giving more thought to the election and are more enthusiastic about voting. If they are paying more attention to what is going on, they are more likely to pick up on candidate positions. Additionally, voting data in the primaries to date also show that the turnout is much higher for the GOP primaries than for the Democratic primaries.

Average Republicans have seen at least 17 candidates running for president at points in the campaign, and even now there are five still in contention (Donald Trump, Marco Rubio, Ted Cruz, John Kasich and Ben Carson). That contrasts with just the two major Democratic candidates who have dominated that side of the election (Hillary Clinton and Bernie Sanders), with -- at most -- three other candidates joining them earlier in the campaign.

Bottom line: This lack of conviction among Democrats that candidates have answers, along with other indicators of lower enthusiasm about the election, could portend poorly for Democratic turnout next November, providing a distinct advantage for Republicans. 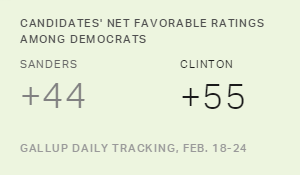