Our previously reported research illustrated the wide variety of ways in which the American public associates a series of 12 leadership dimensions with each of four major presidential candidates.

For example, in comparison to other candidates, Hillary Clinton rated highest on being analytical and prepared; Bernie Sanders on caring about individuals, being consistent, focused, visionary, courageous and inspiring; and Donald Trump in emphasizing success, and being intense, competitive and enthusiastic. Ted Cruz was less differentiated in his perceived leadership style.

One question that emerges from a consideration of these dimensions and their association with the candidates is the relationship these dimensions have with actual voting. Americans may score a candidate high on the dimension of being competitive, but does possessing that leadership attribute work to a candidate's benefit in terms of gaining votes?

These correlations do not allow for inferences to be made concerning causality. Certain types of people may rate a candidate high on a dimension and also be voting for that candidate for reasons that have nothing to do rating that candidate highly on that dimension. It may also be that some dimensions have more variance in their scoring, and that this, in turn, allows them to have more of a statistical relationship to likelihood to vote. Dimensions that are uniformly high across the candidates have less room for variation. Nevertheless, the relationships do help us understand the broad ways in which the leadership dimensions are related to projected actual behavior and thus a possible upside for candidates who demonstrate these characteristics in the future.

All of the correlation coefficients for all traits across all candidates are positive. This reflects the fact that Americans who tend to like a candidate rate that candidate highly on the likelihood to vote for scale and also rate that candidate highly across dimensions. There is, however, considerable range in the correlations across the leadership strengths. Competitive and intense had average correlations across candidates below 0.50, for example, and were the least highly correlated with voting intentions.

The dimensions with lower correlations most likely reflect a couple of processes at work:

To further understand these relationships, we can look at the percentage of Americans who score a candidate as a "4" or a "5" on a dimension, and also say they are highly likely to vote for that candidate. This method of analysis is most likely to convey the practical value of each characteristic in voting intentions.

For example, the average percentage of those who give each candidate a high rating on competitive and also say they are highly likely to vote for that candidate is 29%. That is not very high -- in fact, it is the lowest average measured across the 12 dimensions. In other words, as we found with the correlations, giving the candidate a high score as competitive doesn't appear to mean that the respondent is highly likely to vote for that candidate, in part reflecting both the fact that all candidates tend to get high scores on this dimension, and possibly also reflecting the fact that this dimension is not necessarily seen as a positive.

On the other hand, 53% of those who rate a candidate as high on the inspiring dimension also say they are highly likely to vote for that candidate. This is the highest such average correlation across the dimensions. Candidates, it will be remembered, are less likely to be given a high rating on inspiring in general, so these results suggest that when a respondent does break away from this expected value or normative pattern, and does rate a candidate highly on inspiring, it means something to them. And, in turn, they say they are highly likely to vote for the candidate.

Overall, the conclusion is that ratings on the "softer," not necessarily campaign-related, dimensions are those that really seem to matter to Americans, or at the least are those most differentiating in terms of voting intentions.

These findings provide possible insights into where candidates may possess an "upside" potential in appealing to voters. For example, only 25% rate Clinton as inspiring, but of those who do, 71% are likely to vote for her. Only 19% rate Trump highly on cares about individuals, but of those who do, 68% would vote for him. The characteristic with the greatest potential for impact for Cruz and Sanders, similar to Clinton, is inspiring, and just over half of people who see them as inspiring would vote for them.

Both Trump and Clinton get short shrift from the public on exactly those leadership dimensions which appear to be most correlated with a differentially high likelihood to vote for the candidate, including in particular being inspiring, cares about individuals and being visionary. Obviously Trump and Clinton's low ratings on these dimensions have not held them back so far from becoming their respective party's probable presidential nominees. But in the forthcoming general election fight, an increased emphasis on the dimensions on which they now get little credit could have powerful returns. In short, this analysis suggests Clinton and Trump may have a lot to gain, if they can influence their image in these specific areas. 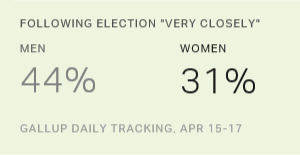