Americans are often more likely to view behaviors as morally wrong than they are to advocate that these behaviors be made illegal. This underscores a general tendency for Americans to hesitate before deciding that banning an action is appropriate. As a result, one can come away with a somewhat different impression from looking at Americans' views of the morality of a behavior versus looking at their views of whether the behavior involved should be made illegal.

We recently looked at several moral issues for which we have both the public's views of the moral acceptability of the issue and their views on making it illegal.

Abortion provides the most striking example of the disparity between these attitudes. Gallup's annual Values and Beliefs poll measures views about the legality of abortion using a three-part question that gives respondents the alternatives of making abortion totally illegal, totally legal or making it legal "under certain circumstances." Views on the morality of abortion in these same surveys are measured with a question asking whether abortion, along with a long list of other actions, is morally acceptable or morally wrong. (Our colleague Lydia Saad has written an excellent review piece on this year's results.)

We combined data from the 2013-2017 surveys and found that almost half of Americans see abortion as morally wrong, with only 20% saying it should be totally illegal.

That means that almost three in 10 Americans have the combination of attitudes that is our primary focus: viewing abortion as morally wrong but at the same time believing it should remain legal (at least in some circumstances).

Relatively few liberals or Democrats are in the "morally wrong but legal" category, primarily because so many in these groups see abortion as morally acceptable and believe it should be legal.

These findings certainly appear to relate to the strategy employed by U.S. groups that are opposed to abortion. More than four in 10 conservatives who don't like abortion still are not inclined to advocate that it be totally banned, underscoring the challenges for pro-life groups who focus just on a constitutional amendment or a Supreme Court decision to make abortion illegal. Many of those sympathetic to an anti-abortion position are demonstrably not sympathetic to a "total ban" type of strategy. But presumably this group would be more sympathetic to efforts to place restrictions on abortion rather than just advocating that it be banned -- which in many ways embodies the strategy groups opposing abortion have taken.

On the other hand, groups sympathetic to a legal right to abortion face the same challenge to the degree that they want to move beyond their core constituency of liberals and Democrats. They are on fairly firm ground in pushing not to ban abortion totally, but have to reckon with those who are sympathetic to various restrictions on abortion (but not a total ban) consistent with their moral antipathy to the practice. 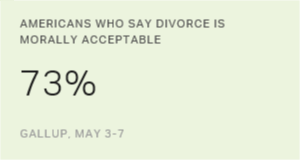 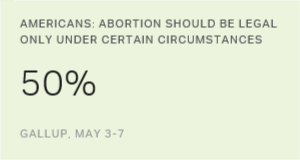 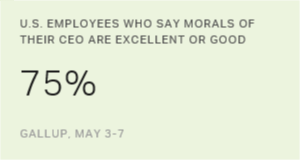