Social scientists have long been familiar with the important concept of the reference group -- a group individuals use as the standard against which to compare their own behavior and self-perceptions, whether a part of that group or not.

President Donald Trump has, in recent months, given evidence that his reference group is shifting to the minority of the U.S. population he characterizes as his "base." In a series of tweets in August, he opined, "Hard to believe that with 24/7 #Fake News … the Trump base is getting stronger!" and, "… Supreme Court pick, economic enthusiasm, deregulation & so much more have driven the Trump base even closer together," and, "The Trump base is far bigger & stronger than ever before …"

A selective focus on only a portion of the population as one's reference group is an attractive and tempting alternative for any politician. It reduces the cognitive dissonance that accompanies attempting to deal with the fact that the entire population is more negative than positive (Trump's current overall job approval rating is 37%), and it produces a stream of positive feedback from that base (as was the case in President Trump's recent speeches in Phoenix and Springfield, Missouri).

At the same time, a selective choice of a relatively narrow reference group for a president has significant implications. The main consequence stems from the finding that the public, taken as a whole, wants less partisanship, less polarization, and is ultimately not in favor of a strict position of sticking to principles at the cost of getting things done.

Keep in mind that government and the way it operates today is, in the public's mind, one of the most important problems facing the nation. Although this concern has multiple causes, a good deal of it comes from the belief that government -- mainly Congress -- is too focused on infighting, bickering, adherence to intransigent partisan allegiances, enslavement to special interests and those with money, and a general lack of willingness to compromise in order to get things done for the public good.

In this sense, Trump's explicit announcement of the use of his base as the reference group governing his behavior (rather than using the nation as a whole) runs the danger of exacerbating, rather than ameliorating, the public's concerns.

All presidents, of course, steer policy and actions toward their underlying partisan and ideological persuasion. Democrat Barack Obama did not push for conservative policies, nor did Republican George W. Bush push for liberal policies.

And, there are legitimate philosophical debates on the nature of representative democracy. Who does or should a president represent? What is a president's appropriate reference group?

Presidents are often brought to office by the votes of a narrow base in the primaries and then again in key swing states. A president's re-election will, to a significant degree, depend again on those same base groups. For any president, then, the practical nature of politics has to be balanced with the broader concept of the nation's best interests taken as a whole.

Presidents, in short, have to tread carefully in balancing their reference group between a narrow group of partisans and the broader public. Sticking to the former exclusively seems particularly challenging in a highly divided nation.

My reading of the data -- from the public taken as a whole, not smaller segments of the population -- suggests that Americans want to see a big-picture, systematic overview of the type of structural and procedural changes that would make government better, taking into account all viewpoints.

This would include not an either-or approach to the role of government, but rather an approach that addresses the possible things government should or should not be doing and addresses (and debates) what the government's role should be relating to each item. The signs that President Trump, or other elements of government for that matter, are moving in this direction are not strongly evident at this time. Politicians appear to be maintaining narrow reference groups rather than the broader reference standards that might be more conducive to solving what the people define as the nation's top problems. 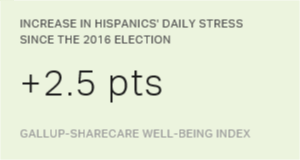