This year as the U.S. celebrates Memorial Day, the holiday that honors the men and women who died in service of their country, Americans continue to express more confidence in the military than in any other major institution in the nation.

Why this two-decade-long level of high confidence in the military? Last year, we probed the public for their answers to this question. Our conclusion? "Americans cite their perceptions of the professional and competent way in which the military has executed its responsibilities, followed by a focus on the importance of what the military does for the country."

More specifically, 26% of those with a great deal or quite a lot of confidence in the military explained their attitudes with references to the importance of what the military does in protecting the people of the country and their freedoms. Americans' other frequently given reasons for holding the military in high confidence focus on personal experience with having a friend or family member who is or was in the military, military members' selfless actions in putting themselves in harm's way for the benefit of others, and the discipline and effectiveness of members.

The number of Americans who themselves have served in the military is dwindling as the U.S. population ages. Our latest research, based on over 170,000 interviews conducted in 2017, shows that 12% of adults report being military veterans. (Another 12% are not veterans themselves, but say a member of their family was or is in the military.) As would be expected given the historical male skew of the armed forces, 20% of male adults are veterans, compared with 3% of adult women.

The percentage of men who are veterans is much higher among those aged 65 and older than it is among the younger age groups.

This reflects a variety of factors, including the huge numbers of men in military service during World War II, the Korean War and the Vietnam War, and particularly the draft -- which was ended in 1973. The youngest men eligible for the draft just before it ended were born in 1955 (that is, they were 18 in 1973). This means they were 62 years old in 2017, when our latest Gallup data measuring veteran status were collected. Thus, it is no surprise that the percentage of men who say they served in the military begins to rise in the population at about that age point. More broadly, half of men 65 and older are veterans, and the number is above 60% for men older than 80. There is little variation across the age spectrum in the small percentage of women who are veterans.

Strengths are one of our key focal points at Gallup -- including the value of learning from people's behavior and attitudes that make them high and valued performers in certain areas. On this Memorial Day weekend, we can take the opportunity to learn from the public's positive views of the military's selflessness and self-sacrifice for a greater purpose, and the public's views of the military's competence and effectiveness. People who are associated with institutions in our society that have the lowest levels of confidence -- particularly Congress -- can in theory profit from studying why the public has such positive views of the honor, integrity, valor and competence ascribed to the military. 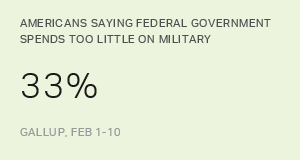