skip to main content
Polling Matters
An Update on Catholics in the U.S.

The release of the new grand jury report documenting sexual abuse committed by more than 300 priests in Pennsylvania over the past seven decades has been another blow to the Roman Catholic Church.

The Vatican responded to the new report last week, calling the abuses "criminal and morally reprehensible," and going on to say, "Victims should know that the pope is on their side. Those who have suffered are his priority, and the church wants to listen to them to root out this tragic horror that destroys the lives of the innocent." And the pope issued a letter saying, "No effort must be spared to create a culture able to prevent such [abuses] from happening, but also to prevent the possibility of their being covered up and perpetuated."

It's too early to tell whether this latest report will have an impact on what Americans, or American Catholics, think about the pope, but we do have an update on his image from just before the report's release. A Gallup survey conducted Aug. 1-12 showed that Pope Francis remains very popular among Catholics, with 78% favorable and 12% unfavorable ratings. This is down slightly from the last time we measured the pope, in October 2015, when his favorable rating was at 87% among Catholics -- but that followed a successful trip to the U.S. by Francis. Pope Francis' current rating is slightly above where it was among Catholics in the previous Gallup measure -- 71% back in July 2015 -- but below the 89% favorable from February 2014.

Pope Francis' image among all Americans is 66% favorable and 17% unfavorable, about average for the five times Gallup has asked about him. When we first measured Pope Francis in 2013, 31% didn't know enough about him to have an opinion. That figure is now down to 17%. Francis' highest favorable rating was 76% in February 2014 and his lowest 58% in April 2013.

In recent decades, Americans' most positive favorable rating for a pope was 86% for Pope John Paul II in 1998. The lowest was 40% favorable and 35% unfavorable for Pope Benedict XVI in 2010, a rating that came amid a sharp rise in criticism of his handling of sexual abuse cases in Europe before he became pope.

Catholic Views of the Honesty of Clergy, Confidence in the Church

We don't find a lot of evidence that Catholics have become substantially less confident in the clergy or the church in general over the past decade and a half.

Over the past four years, an average of 49% of Catholics have rated the honesty and ethics of "the clergy" as very high or high, better than the 43% honesty rating among Protestants. For Catholics, this does represent a modest five-percentage-point drop from the years 2004-2005. But Protestants' views of the honesty of the clergy were essentially the same as Catholics' views in 2004-2005, meaning Protestants' views have dropped more than twice as much as Catholics' since that period.

We don't know exactly why Protestants have become more negative than Catholics when asked about the honesty and ethics of the clergy. It may be that Catholics are remaining loyal and defensive about criticism of their clergy, while Protestants assume the question is being asked about Catholic clergy and are more willing to be critical. (When we include the term "clergy" in our annual update on Americans' views of the honesty and ethics of professions, we don't specify Catholic or Protestant clergy.)

Despite the challenges the Catholic Church has faced as a result of priest sex-abuse cases in recent decades, the overall percentage of Americans who identify as Catholic has not changed substantially. About 22.5% of American adults are Catholics, based on data from our Gallup tracking between January and June of this year. From a big-picture perspective, that is similar to the percentages in the 1950s and 1960s. We saw a modest increase in the Catholic percentage in the 1970s and 1980s, when it reached the upper 20% range. But for the past 18 years, the Catholic percentage has varied in a fairly tight range between 21% and 25%.

This broad stability in recent years is remarkable, given the rise in the number of Americans who reported having no religious identity during that period (the "nones"). While the nones have risen from single digits two decades ago to about 20% now, the percentage of Catholics is down just a percentage point or two. During this same period, the percentage of Protestants has declined significantly.

The recently released report focused on priest abuse in Pennsylvania -- the 11th-most-Catholic state in the union, with 28% of its adult residents identifying as Catholic in 2017.

To put this in perspective, the percentage of the adult population identifying as Catholic ranges from 44% in Rhode Island, the single most-Catholic state (by percentage), to 6% in Alabama. After Rhode Island, the most Catholic states are New Jersey, Connecticut, Massachusetts and New York. Other than Alabama, four Southern states -- Tennessee, Mississippi, West Virginia and Arkansas -- and Mormon-dominated Utah have single-digit Catholic populations.

The composition of the Catholic population in the United States is 34% Hispanic, twice the overall 16% U.S. Hispanic percentage in Gallup data for January-June of this year. The influx of Hispanics into the U.S. in past decades has helped keep the Catholic percentage of the population stable. 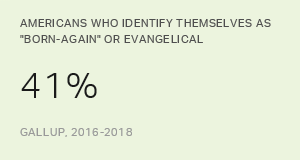